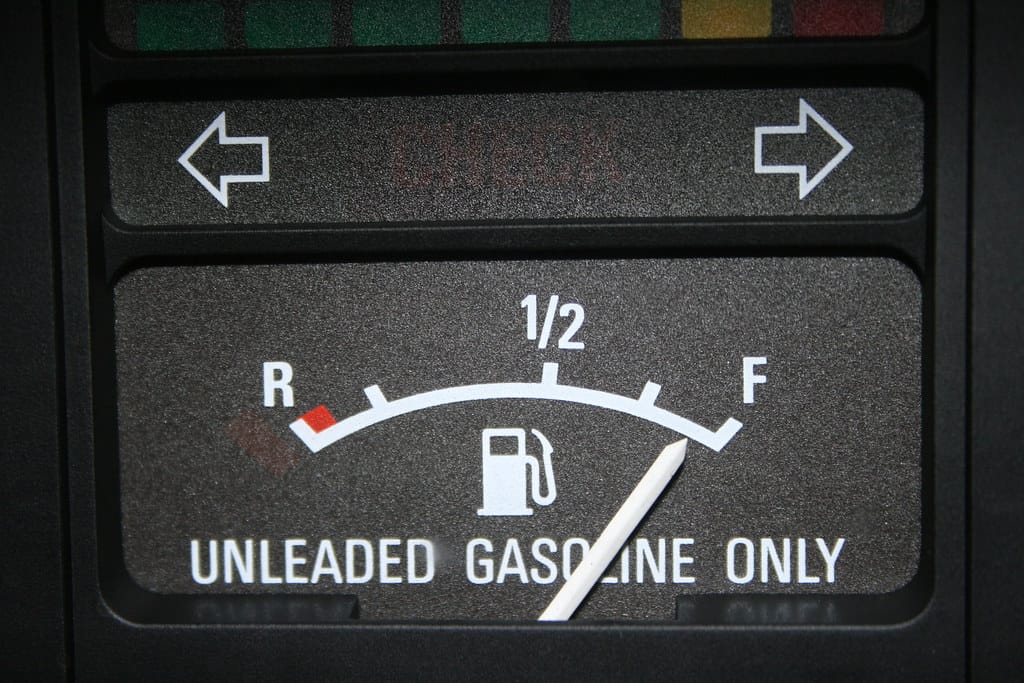 How can you tell if there is water in your car’s gas tank?

The symptoms of water in a gas tank are a drop in fuel economy, lack of power when accelerating, a decrease in engine performance, a rough engine idle and difficulties when starting the engine.

Water and fuel don’t mix, and the fuel system of your car is not designed to handle water. If water in the gas tank is left untreated, this problem will badly affect the engine and will damage parts like the fuel filter, fuel injectors, fuel pressure regulator, fuel pump and even the catalytic converter.

5 Symptoms Of Water In A Car’s Gas Tank

How can you tell if there is water in your gas tank? I always recommend running an engine diagnostic test before I start any troubleshooting, as error codes can help you to narrow down the search.

There are lots of things that can go wrong if there is water or condensation in the gas tank and fuel system.

The bottom line is that the engine will not be able to run properly, and you are going to get a badly running vehicle and all the symptoms that go along with that.

Here are a few water in gas tank symptoms you will almost definitely experience if water has found its way into the fuel system:

Bad fuel economy can be caused by lots of different problems, but it will also be affected by the water in the gas tank. This is because the mix of water and fuel particles will decrease combustion efficiency significantly.

The impact on MPG will be directly related to the amount of water present. So in the best case scenario, you will lose at least 10% combustion efficiency which is going to impact fuel economy and your wallet.

If there is water in the gas tank, this will definitely lead to a deterioration in engine performance.

The decrease in combustion efficiency won’t only affect fuel economy but also the engine’s ability to deliver power when needed. A noticeable drop in acceleration response will be the second signal that could indicate you have water in the gas tank.

Once again, depending on the amount of water present in the fuel tank you may experience different degrees of lack of acceleration. In extreme cases, you may even undergo engine lags that lead to a total stall.

A rough idle is another typical symptom of water in the gas tank. It can be nearly impossible for the ECU to compensate for contaminated fuel.  There will almost certainly be extra water vapor in the exhaust gases too, causing problems with exhaust sensor readings.

Water and water vapor are highly corrosive over time. The water could also potentially damage oxygen sensors and catalytic converters, leaving you with a check engine light on the dashboard or a car that won’t start.

Since the air-fuel mixture is contaminated by the water in the gas tank it will be much harder to start the engine, if it even starts at all.

No matter what the age or condition of the engine, any contaminant present in the fuel tank will cause this kind of symptom. Water, in particular is maybe one of the worse contaminants because it’s not flammable and doesn’t mix well with fuel, so even a small amount is very difficult for the engine to get rid of.

Unsurprisingly, the sudden drop in combustion efficiency will be accompanied by a notable increase in exhaust emissions. This will play havoc with sensor readings and exhaust parts.

How Can Water Get into The Gas Tank Of Your Car?

You may think that water in the gas tank is only something that happens in older cars or trucks.

This, unfortunately is not the case.

A lot of the time water can get mixed in with the fuel because of human error or because of faulty parts in the fuel deliver system.

Here’s a few ways water can get into a gas tank:

1. Through condensation in the fuel tank due to excessively cold/warm weather

Modern fuel tanks are sealed, and condensation is not supposed to happen. However, depending on the year and manufacturer of your car, it’s still possible to condensate a small amount of water over time.

The condensation problem mentioned above is frequent if the gas station use outdated fuel tanks. Older designs are prone to condensate great amount of water in the bottom of the tank.

A  fuel cap with a badly worn seal can sometimes be the reason for the water in the gas tank. It can also be caused by a badly fitting aftermarket replacement fuel tank cap.

Sometimes its your fault! Mistakes happen, for example, not tightening the fuel cap, forgetting to put on fuel cap or filling a tank during a really rainy day.

What Happens When Your Car Has Water in The gas tank?

Water in the fuel system can cause a wide range of problems. It all depends on the type of engine and how much water there is.

A tiny amount probably won’t cause serious damage, and you may not even notice it if it’s a one off event.

Larger amounts of water, and chronic problems such as leaks in the fuel system that cause condensation will damage the engine over time.

If the problem is bad enough, then you may run into one or more of the following problems:

How to Get Water Out If the Gas Tank

There are two well proven methods of resolving water in the fuel tank and fuel system.

No matter which method you use, you should always try to figure out how the water got into the system so you can prevent it happening again.

It’s also a good idea to replace the fuel filter no matter how much or how little water there is in the system.

This may sound like the obvious solution, removing the fuel tank and replacing all the fuel.

Then using dry air, the fuel lines can be flushed to get rid of the remaining fuel. This is the best way to completely dry out the fuel system and remove any traces or water vapour.

The downside to this method is that it is very labor intensive and could be expensive. It is probably the best option if you drive a newer vehicle and want to avoid costly repairs. If you drive an older vehicle, or something that you just want to keep running for another while, then the second option might be for you.

2. Add fuel additives to the fuel

An alternative to the above is pouring a fuel additive to your gas tank. There are special additives specifically created for this problem, but you could also use a good quality octane booster to get rid of water in the gas tank.

Octane boosters absorb moisture and also contain special agents that clean the fuel system. Since they improve fuel quality you can avoid almost all the problems related to lower fuel efficiency. Keep in mind though, that if the amount of water in the gas tank is too high you may need to remove the tank anyway.

1. Can you drive with water in your gas tank?

No, it is not advisable to drive your car if you know that there is water in the gas tank. If water regularly gets into the fuel delivery system, this can cause the fuel pump and fuel injectors to fail prematurely. This is because the fuel in your gas tank contains additives that are added to the fuel to help lubricate, and extend the life of the various components of the fuel delivery system. If there is a significant amount of water in the fuel tank, the fuel loses some of its lubrication capabilities.

2. How much water in the gas tank is bad?

Even a small amount of water in the gas tank is bad. Water will corrode and can seriously damage the fuel pump, fuel lines and fuel injectors. Most modern engines will simply cut out if the ECU detects a problem with the fuel, so as to protect the engine.

If enough water gets into the gas tank and makes it to the fuel filter, this will ruin the internal membranes of the filter. Any significant amount of water in the gas tank should be addressed as soon as possible and the fuel filter should always be replaced when the water is removed from the gas tank.