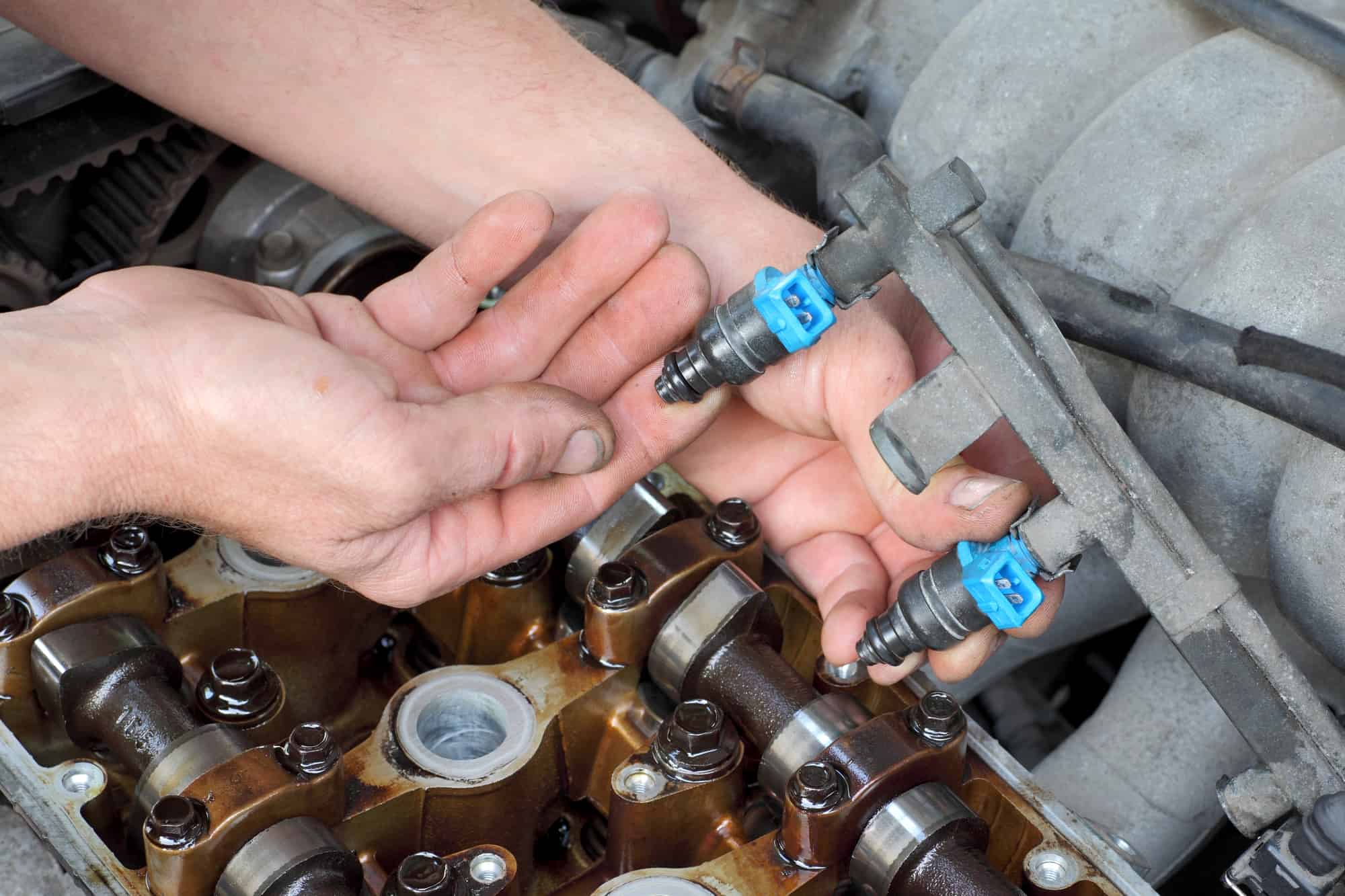 Fuel injectors are used in all modern engines, and are a vital component in the fuel management system. A bad fuel injector will wreak havoc with how your engine runs, and will likely leave you stranded on the side of the road.

Fuel injectors are now used in pretty much all passenger vehicles. They are a vital part of a complex fuel management system. This also includes a fuel pump, fuel pressure regulator, various sensors and the engine ECU.

If the fuel injector is not operating properly, then other parts of the engine will be affected and over time can be damaged.

How does a fuel injector work?

The job of a fuel injector is to deliver fuel to the combustion chamber of the engine at a controlled rate and in the right amount.

Most modern engines use a technique known as direct injection to get the fuel into the engine chamber. The whole process involves the complex interaction of all parts of the fuel management system, under the control of the ECU. So it is vital the each part of the system, including each injector are operating properly.

Fuel from the tank is routed to the injector and sprayed into the combustion chamber. It arrives via a nozzle that is opened and closed with a needlevalve. The opening and closing of the valve is operated by a solenoid.

When the needle valve is opened, fuel under enormous pressure is sprayed into the combustion chamber. In modern common rail diesel engines, fuel pressures can be over 25,000 psi.

Because the injector is seated in the top of the engine cylinder, it is constantly exposed to heat and pressure. This increases the chances of failure over time.

Why Causes a Bad Fuel injector?

A fuel injector will usually only fail in one of two ways. It will either become clogged internally, or will failmechanically.

Here’s a list of the most common reasons why a fuel injector fails:

1. Dirty/Clogged Injectors – What causes a fuel injector to become blocked?

Over time the nozzle of the injector can become dirty, and partially blocked. This is caused by the burning of hydrocarbons that are present in the fuel, flowing through the injector. When you shut off your engine, the injector will soak up the heat of the engine. This causes any fuel left in the injector to evaporate, leaving behind hard deposits inside the injector. Over time, these will eventually block the injector.

2. Leaking Injectors – What causes a fuel injector to leak?

3. Internal Part Failure – What causes a fuel injector to fail?

There are many moving parts inside an injector, and over time they can fail due to normal wear and tear or lack of maintenance.

5 Symptoms of A Bad Fuel Injector

If there is something wrong with one or more of your car’s fuel injectors, then it won’t run properly, or may not run at all.

Here’s a run down of the main faulty injector symptoms that will affect most cars. You will need to have the car ECU scanned for error codes to be absolutely sure that it’s an injector problem. Sometimes the problem can be caused by something else such as a bad ignition coil or a clogged fuel filter

This doesn’t really tell you anything, except that there is a problem with the engine. A faulty injector will cause the engine to misfire, and this will trigger the engine management light. You will need to investigate further to narrow down the cause of the misfire.

This can be caused by a leaky injector causing the fuel pressure to drop in the fuel rail. A smell of unburnt fuel from the engine bay can point to a leaky injector. Any possible fuel leakage should be investigated straight away.

If an injector is partially blocked, then the right amount of fuel won’t be getting into the engine cylinder. This will cause knocking and excessive engine vibration. There are lots of other causes of car vibrations. Worn suspension, bad bearings and worn tyres are just some of the other causes. Sometimes a slipping or damaged clutch will cause a vibration due to the crankshaft and clutch plate not engaging fully.

A badly performing injector will affect the running of the engine. Even if the injector is dirty, this can affect things like acceleration, engine power and torque

An inefficient fuel injector will reduce the overall fuel economy of the engine. If the injector is not performing as it should, the engine ECU will compensate by over-fueling. This causes the engine to run “rich”, leading to more fuel being used than necessary.

How to Diagnose a faulty fuel injector?

So your engine is running badly (or not at all).  What’s the next step in diagnosing a problem with the engine injectors?

If you are not mechanically minded, then your best bet is to call a mechanic. Injectors (and engines) can be complicated and expensive to repair, so if you are unsure at all, then let an expert diagnose it.

Hook up an OBD code reader

This will tell you if the Engine Control Unit (ECU) has logged any errors. If an engine misfires because of a bad injector, there will be an error code that will point to the injector in question. If you are using a generic (not vehicle manufacturer specific) code reader then you can expect to see codes beginning with P02. For example, a fault with an injector in cylinder one would give a code of P0201. You may also see other error codes such as P0101, P0300, P0299.

If you open up the hood and there is a strong smell of fuel then a leaky injector could be the culprit. If there are no error codes, the next step will be to remove each injector for inspection. This is usually best left to fuel injector experts.

Remove and test all injectors

Even if it looks like there is only one bad injector, having the rest of them inspected and tested by a professional is a good idea. If the engine has covered a lot of mileage, chances are the other injectors are dirty and may fail soon too.

If you suspect that a broken injector is your problem, then the easiest way to diagnose it is to check the engine ECU for error codes. A broken injector will cause an engine to misfire and this will trigger an error code.

Can A Faulty Fuel Injector Be Repaired

Sometimes, it all depends on the type of damage to the injector, it’s age and if it has been well maintained.

Here’s a quick rundown of what can and can’t be fixed:

How to prevent Fuel injector problems

In general, fuel injectors are hard wearing and with a little care can often last the life of the engine. Like any other engine part, regular maintenance is the key to keeping them going. If you plan on running up high mileage on your car, then there are a few things you can do to help.

The most effective way to keep injectors in good working order is to have them removed and inspected at regular intervals. Under normal circumstances that would be every 25,000 miles or 40,000 Kms. If you tend to do a lot of short Journeys then you’d probably want to have them looked at more often to prevent the build up of deposits.

2. Use of fuel additives

Another great way to keep injectors in good health is to regularly add a fuel injector cleaner to to your fuel tank. Many manufacturers claim that These cleaners will give your car extra power or Increased MPG. They probably won’t, or make much difference to a car that is running properly.  However the best fuel injector cleaners are great for maintaining injectors that have been well looked after, especially in diesel engines.

Regular oil and filter changes will go a long way towards maintaining a healthy engine. If an engine isn’t running efficiently, this can load extra pressure on injectors. It’s also important to regularly change the fuel filter to ensure a proper fuel flow.

If you want to keep your car running, don’t neglect the fuel injectors. They are easy enough to maintain.  Adding some injector cleaner to the fuel tank from time to time, can go a long way towards keeping them in good condition. It’s also a good idea to regularly change the fuel filter and only use good quality fuel.

If your car has covered a lot of miles or ifyour engine is underperforming or randomly misfiring, it may be caused by bad fuel injectors. Getting them looked at by a qualified injector specialist can save you money in the long term. Just remember that Diagnosing any problems quickly will help prevent further damage to the injector, the fuel system and the engine.