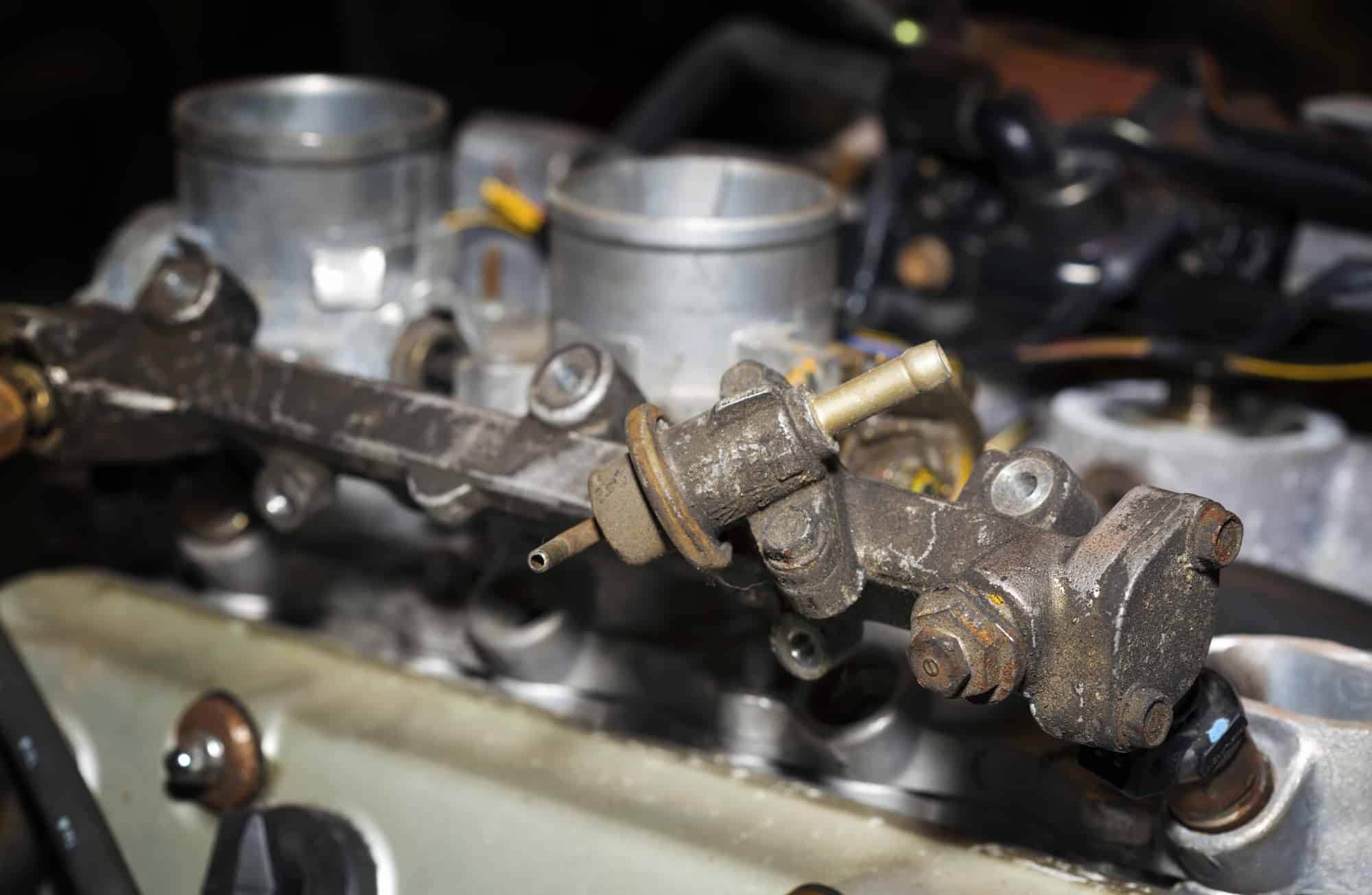 The symptoms of a bad fuel pressure regulator include poor fuel economy, difficulty starting the engine, fuel in the vacuum lines and engine misfires.

If your car won’t always start or is running rough, then a bad fuel pressure regulator may be the problem.

This is because when the fuel pressure regulator diaphragm is broken, fuel passes through it all the way through to the vacuum line and ultimately reaches the intake manifold.

Here are some of the most common signs of a bad fuel pressure regulator.

1. Check Engine Light on the dashboard

The check engine light will usually come on if the ECU records an error in one of the critical engine circuits.

If there are problems with the fuel system, this will be picked up by the ECU and logged in memory.  If you run a diagnostic you can expect to find error code P0089.

A bad fuel pressure regulator can create a difficult to start or ‘no start’ engine.

If the ECU can’t measure the excess fuel coming through the fuel pressure regulator vacuum line, it will usually cause the engine to run rich (too much fuel). As a result, some of this fuel will find its way to the intake manifold, causing a build up of fuel deposits. When the engine is hot, this can make it harder to start the engine.

If the ECU can’t keep track of the amount of fuel going through the fuel pressure regulator, it’s going to result in lower fuel economy.

The fuel pressure regulator controls the fuel pressure in the fuel system in response to engine demand. It does this by opening and closing the fuel return valve. If too much fuel remains when not needed, then this will lead to poor economy. As you may expect, this problem will increase fuel consumption dramatically.

4. Fuel in the vacuum lines

A broken fuel pressure regulator can result in fuel in the vacuum lines.

The fuel pressure regulator is directly connected to the engine vacuum. Fuel leaked through this line will spread to the vacuum system and can eventually lead to other problems such as cracking or splitting of rubber vacuum hoses.

The incorrect fuel delivery may cause intermittent engine misfires depending on the fuel demands of the engine.

It’s worth noting that engine misfires can also be caused by a wide range of other problems such as bad fuel injectors or a bad fuel filter to name but a few.

Another sign of problems with the fuel delivery system and the fuel pressure regulator, is a rough engine idle accompanied by jerking or hesitation when stopped.

If the fuel pressure regulator cannot properly regulate the fuel pressure, it can cause the engine to run badly. When an engine is idling, the vacuum pressure can be as low as 10psi, but there is a vacuum in the intake manifold.

The fuel pressure regulator must adjust and lower the fuel pressure in the fuel rail to match the effective pressure of the intake manifold to stop fuel from being sucked back from the injectors, and to keep the engine running when idling.

It’s also possible for a rough engine idle to be caused by a stuck or failing idle air control valve.

A failed fuel pressure regulator can contribute to engine back fire when decelerating.

Fuel particles won’t burn in the combustion chamber and will enter the exhaust pipe with a high energy charge. This energy is then unleashed in the form of mini explosions.

The failure to deliver the exact amount of fuel to the engine could cause a noticeable gas smell coming from your exhaust pipe. You may also anticipate problems with the spark plugs, black smoke, and even gasoline dripping from the exhaust tail when the condition is severe.

9. Potential destruction of the catalytic converter

One of the worst problems caused by a bad fuel pressure regulator is the potential destruction of the catalytic converter. The fuel particles reaching the catalyst system will corrode it at very high speed, literally “melting it” and making it useless.

What Is A Fuel Pressure Regulator?

The fuel pressure regulator (also known as an FPR) is a vacuum controlled valve that is usually located on the fuel injectors rail. A simplification of an FPR would be imaging it as a device that controls the amount of fuel returning to the fuel tank.

The first one, WOT acceleration, demands all available power from your engine immediately.

The Electronic Control Unit (ECU) will do everything at hand to fulfil that demand. This includes increasing the fuel injectors pulse duration to its maximum value. Doing so could cause a drop in the fuel injectors rail pressure and thus a huge lag in performance.

Some typical injectors in an engine

The fuel pressure regulator prevents such a situation by means of partially blocking the fuel return line which in turn preserves the adequate pressure.

The second scenario, sudden deceleration, is just the contrary. The ECU may entirely shut-off the fuel injectors which could cause an overpressure in the fuel rail. In that case, the FPR allows the excess fuel return to the fuel tank and thus the normal pressure is preserved.

How Does A Fuel Pressure Regulator Work?

Internally, the fuel pressure regulator consists of a diaphragm that is attached on one side to a spring and on the other side to a ball-type valve. The spring side is exposed to the engine vacuum while the valve side is connected in one end to the fuel injector rail (fuel inlet) and the other to the return line (fuel outlet).

When a wide open throttle condition as described above occurs, the engine briefly loses its vacuum which allows the spring to force the diaphragm downward closing the return line and thus incrementing the fuel available for the injectors.

Under deceleration, the vacuum increases forcing the diaphragm upwards and opening the valve more than normal, dropping the pressure in the fuel rail to a minimum.

The fuel pressure regulator design described above is the more widely used. It’s very simple and reliable, but not infallible. It can be subject to wear, especially the diaphragm that is constantly moving up and down.

How Do You Diagnose A Bad Fuel Pressure Regulator?

You may need one or more of the following tools:

> Vacuum line: disconnect the fuel pressure regulator vacuum line and perform a visual inspection of its condition. Look for signs of worn or deterioration. Pay special attention to possible holes in the vacuum line. Ideally, a vacuum line test using a manual vacuum pump should be performed.

> Engine vacuum: using the appropriate adapter connect the vacuum gauge and start your engine. Compare the vacuum value with the OEM literature and check is within the accepted range. A low engine compression, intake air leak, or a bad engine timing could cause a low vacuum and hence the fuel pressure will be higher than normal.

> Fuel Pressure Regulator condition: using the appropriate adapter connect the manual vacuum pump to the FPR. Apply vacuum by the order of 25-30 in-Hg. Watch for any gasoline drip in the FPR vacuum connection. Replace the fuel pressure regulator if necessary.

How To Replace A Bad Fuel Pressure Regulator

The FPR sensor is usually located in the fuel injector rail.

> Preliminary steps: ensure that the ignition switch is off and then disconnect the vehicle battery. Detaching the negative terminal is usually enough.

> Remove FPR screws: most fuel pressure regulators are attached to the fuel rail using screws, but depending on your vehicle other tools may be necessary. Carefully remove the regulator pushing it out ot the fuel rail. Be warned that many vehicles require removing the whole fuel rail in order to access the FPR screws. Don’t forget to replace the regulator o-ring if it not included with the new FPR.

> Install the new FPR sensor: retire the old FPR and then install the new one. Double check that you’re using the adequate part number.

> Clear DTC memory: using the OBD2 code reader clear the ECU memory to prevent any false code been stored. You will need entering in KOEO mode for doing so.

> Perform driving cycle: once you are done, drive the vehicle for more than 10 minutes. Try to accelerate as you would normally do.