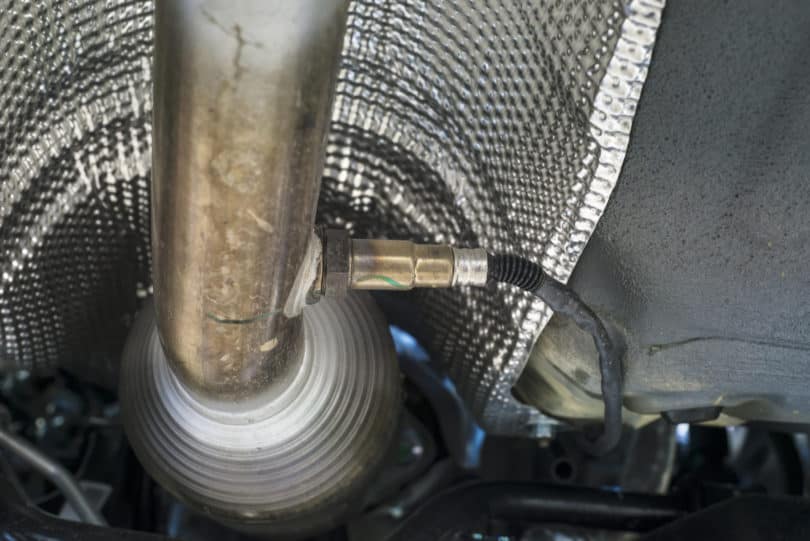 What Are The Symptoms of a bad O2 sensor?

A bad oxygen sensor is not good news for your car's engine or your pocket. The job of the oxygen sensors on your car are to monitor the gases coming out through the exhaust. This information is then used by the engine management module to adjust the air to fuel mixture to enhance the efficiency of the engine.

The symptoms of a bad O2 sensor include poor fuel economy, a lack of engine power during acceleration, increased exhaust emissions and a smell of fuel from the exhaust pipe.

If one or more of the oxygen sensors are faulty, then you are going to experience symptoms of an engine that is running too rich or too lean. Common engine error codes for faulty oxygen sensors include P0420 and P0140.

In this article I'll explain the symptoms of a bad oxygen sensor, how to diagnose and replace a faulty oxygen sensor and how much it is likely to cost.

Symptoms Of A Bad Oxygen Sensor

For an engine to run efficiently, the correct fuel to air ratio must be maintained under all driving conditions. By monitoring the amount of oxygen present in the exhaust gases, the engine management system can tweak the fuel mixture by altering the fuel delivery.

The oxygen sensors provide a real time analysis of the exhaust gases that can be used by the ECU. If an oxygen sensor is failing or is bad, then it won't be able to provide an accurate reading of the oxygen levels in the exhaust system.

This will affect the performance of the engine and will often show up as tell tale engine performance symptoms. The most common bad O2 sensor symptoms are:

Note: Throughout this article, the term “oxygen sensor” (O2 sensor) will be used regarding the component responsible for reporting to the ECU if the exhaust gases have excess fuel (rich condition) or excess air (lean condition). Formally speaking, on modern vehicles this type of sensor is called air/fuel ratio (A/F sensor or AFR). This sensor has the same function as the old-tech oxygen sensor, and that’s why it is commonly known as an oxygen sensor too.

What Is An Oxygen (O2) Sensor?

The Oxygen Sensor (also known as the O2 sensor) is one of the main components of the emission system. Its job is to report, in real time, the exhaust gases mixture condition (rich or lean).

This information is used by the ECU to perform corrections in the amount of fuel delivered to achieve the stoichiometric ratio consisting of 14.7 parts of air per each part of fuel.

A deteriorated or faulty oxygen sensor will have a direct impact on engine emissions and performance because the ECU will not have any feedback information concerning combustion results.

How Does An Oxygen Sensor Work?

Depending on the year and maker of the vehicle you may find different types of oxygen sensors. From the old-style “classic” oxygen sensors to modern era 'wideband' AFR sensors. Most designs (old and new) are based on Zirconia sensors, where an electrochemical process is responsible for measuring the oxygen concentration.

Most similarities end there. Modern wideband oxygen sensors are capable of reporting the exact amount of oxygen content in the exhaust, not only if the mixture is rich or lean. The real-time feedback from the oxygen sensor gives the ECU the ability to adapt the fuel delivery quickly and efficiently under any driving condition. The oxygen sensors are located on the exhaust

Oxygen sensors also include a heater element. This helps the sensor core reach its operating temperature faster and hence start transmitting accurate information to the ECU as soon as possible. The heater circuit is controlled and constantly monitored by the ECU, that way it ensures everything is working as expected.

Although all sensors are based on the same zirconia technology, but manufacturers implement the principles in different ways. That’s why it is highly advisable to find a reliable source of information regarding the specific wiring diagram for your vehicle before starting any diagnostic process.

When should oxygen sensors be replaced?

Oxygen sensors are usually only replaced when they fail, or when engine performance deteriorates. They are not part of the regular service schedule, and most of the time they won't need to be touched, especially on lower mileage vehicles.

Most oxygen sensors should last for at least 70,000 to 100,000 miles. Some enthusiasts believe that you should replace oxygen sensors at set mileage intervals, around every 50,000 miles. This can help to ensure that the engine always performs at its best and tihs can protect against misfires.

How Do You Diagnose A Bad Or Failing Oxygen Sensor?

Depending on the type of oxygen sensor installed on your vehicle, you may need one or more of the following tools:

A professional grade automotive scanner with live data graphing capabilities is not essential for testing the oxygen sensor but certainly would speed up the process no matter what type of sensor is installed. O2 Sensor when removed from exhaust

> Data trouble codes: using an OBD2 code reader take note of any DTC present in the ECU memory. To do this you need to connect your code reader and turn the ignition key on (engine off), a state usually known as KOEO. Common engine error codes that may appear with a bad oxygen sensor include P0140, P0171 and P0174.

IMPORTANT: The following tests assume the O2 sensor harness is already unplugged, refer to “how to replace” section if you have any doubt.

Refer to the proper wiring diagram and identify the terminal corresponding to the +12V line. To measure the supply voltage, you will need to enter in KOEO mode (Key On Engine Off) and turn the digital multimeter dial to “voltage” test mode. Now place one multimeter probe in a known ground (battery negative is a good one) and the other probe tip in the terminal of the oxygen sensor wiring harness corresponding to the +12V supply. If the measured value is below 95% of the battery voltage then you will need to check the entire line from the oxygen sensor harness all the way to the ECU itself.

> Ground test: enter in KOEO mode (Key On Engine Off) turn the digital multimeter dial to “voltage” test mode and place one probe tip on the oxygen sensor harness terminal corresponding to the supply voltage and the other on the terminal that should be the ground. Ideally, the voltage would be the same value as the previous test, if the difference is greater than 10% then you will need to check electrical resistance and continuity of the ground line from the oxygen sensor harness all the way down to the ECU.

> Upstream Oxygen Sensor live test: using an automotive diagnostic scanner you can perform upstream oxygen “live test”. First, enter in KOEO mode and lock the upstream oxygen sensor data on the display. Depending on your vehicle and scan tool maker you may have several items to check.

Focus on the oxygen voltage output. Once you are ready, start the engine to enter KOER mode. If your scan tool has a graphing ability turn it on. Graph engine RPM and oxygen output simultaneously. Accelerate the engine to 2000 RPM. You should see the voltage varying during acceleration and then stabilize. Decelerate to idle. You should see the opposite variation in the oxygen output.

Repeat the procedure several times. On “V-type” engines compare the results between banks. Some manufacturers include special tests for the oxygen sensors. Follow on-screen instructions to complete those tests. Please notice that oxygen sensor output is completely different between wideband models and narrowband models, refer to the appropriate OEM literature to determine their expected behavior.

> Downstream Oxygen  Sensor live test: using an automotive diagnostic scanner you can perform downstream oxygen “live test”. First, enter in KOEO mode and lock the oxygen sensor data on the display. Depending on your vehicle and scan tool maker you may have several items to check.

Focus on the downstream oxygen voltage output. Once you are ready, start the engine to enter KOER mode. If your scan tool has a graphing ability turn it on. Graph engine RPM and oxygen output simultaneously. Accelerate the engine to 2000 RPM. You should see the voltage fairly stable.

Decelerate to idle. You should not see much variation in the oxygen output. Repeat the procedure several times. If the downstream output closely resembles the upstream oxygen sensor output then you may have a bad catalytic converter. Some manufacturers include special tests for the oxygen sensors. Follow on-screen instructions to complete those tests.

How Much does it cost to replace an Oxygen sensor?

A good quality oxygen sensor will normally cost between $50 and $100.

It shouldn't take a mechanic any longer than a few hours to complete the job, so I'd expect to pay an extra $100 in labor costs, on top of the cost of the sensor.

Most cars have at least two oxygen sensors, and these are located on the exhaust system. They can be surprisingly difficult to replace because they can be difficult to access.

You will also need a special oxygen sensor tool to unscrew it from the exhaust. If you don't have a dedicated workshop or vehicle ramp, then I'd recommend getting a mechanic to do the labor for you.

How To Replace A Bad Oxygen Sensor The Oxygen sensors are located near the catalytic converter

1. Can a bad O2 sensor cause misfires?

Yes, as outlined above, a common sign of a bad or failing oxygen (o2) sensors is engine misfires. This is because the oxygen sensor feeds the oxygen concentration of the exhaust gases to the ECU and this is used to control the air to fuel ratio, the combustion process and the engine timing. A bad oxygen sensor will therefore cause a rough or irregular engine idle and engine misfires

2. Is it a bad oxygen sensor or catalytic Converter?

The symptoms of a bad oxygen sensor and a bad catalytic converter can be very similar, and sometimes it can be difficult to know which one has failed. To correctly diagnose the problem, each part will need to be inspected and any error codes retrieved from the ECU.

It's worth noting, that if the catalytic converter needs to be replaced then you should replace the oxygen sensors too.

The signs of a bad oxygen sensor can include poor fuel economy, a lack of engine power during acceleration, increased exhaust emissions and a strong smell of fuel from the exhaust pipe.

On average, it can cost between $50 and $250 to replace an oxygen sensor. If you suspect that one or more of the oxygen sensors on your car are faulty, then you should do some further testing or get them replaced sooner rather than later so as not to cause any engine damage.