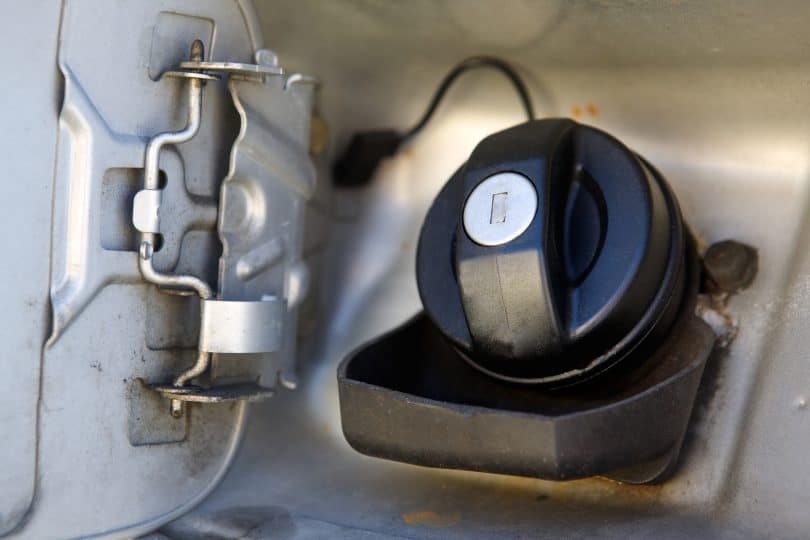 The gas cap on your car can sometimes wear out. This can lead to problems with the fuel in the tank and can sometimes affect engine performance.

Luckily, changing the gas cap is one of the easiest repair jobs you can carry out, once you have established that it is the gas cap that is at fault.

What Are the Symptoms of a Bad Gas Cap?

The gas cap is often overlooked when it comes to problems with the fuel tank or a smell of fuel from the vehicle. Over time, the rubber seals on the gas cap will harden and eventually wear out, causing it to fail.

A worn out gas cap won't seal the fuel tank as it should and this can lead to more serious engine performance problems if the fuel is constantly becoming contaminated with dirt or water.

Here's a more detailed explanation of the symptoms of a bad or failing gas cap.

1. Smell of fuel from the outside of the vehicle

A bad gas cap can allow fuel vapors to escape from the vehicle as it no longer seals the tank as it should. This will lead to the smell of gas around the outside of the vehicle and sometimes inside.

There are many other (more serious) reasons why fuel vapors are escaping from the fuel delivery system of your car. Here's a full article explaining why your car smells like gas that goes into more detail.

Sometimes a bad gas cap can cause problems with the fuel system on your car. The fuel delivery system on modern cars is a complicated, highly pressurized system that runs from the gas cap right through to the fuel injectors. If there is a problem anywhere in the fuel system then this will lead to engine performance problems and a check engine light flashing on the dashboard.

A bad gas cap can let dirt or water vapor into the gas tank, and this can contaminate the fuel in the tank, leading to problems with the performance of the car. This can cause a bad fuel filter and can damage the fuel injectors if it happens regularly.

If the gas cap is no longer sealing the gas tank and is allowing fuel vapor to escape, or contaminants to get in to the fuel, this will usually lead to problems with the vehicle Evaporative Emission System (EVAP).

The EVAP system fitted to modern vehicles is there to manage the evaporation of fuel fumes from the gas tank. If there is a leak (a bad or failing gas cap) then this will trigger an error in the EVAP system that will be stored in the ECU memory. An engine code error can lead to a check engine light on the dashboard, or changes to how the engine performs.

A bad gas cap can lead to poor fuel economy. If the gas cap is not sealing the fuel tank, the fuel can become contaminated and in some cases fuel can actually evaporate from the tank.

Fuel escaping from the tank is usually only a problem for older cars, as newer tanks have one way systems fitted that will prevent fuel and fuel vapors from escaping via a badly fitting gas cap. However, if the fuel is allowed to escape as vapor this will lead to poorer fuel economy as fuel will be literally disappearing from the tank!

Contaminated fuel can also lead to poor fuel economy as the fuel will struggle to provide the engine with adequate power especially during heavy acceleration. This can lead to the fuel delivery system using more fuel to try to compensate for the under performance.

A fairly obvious symptom of a bad gas cap, is when it no longer fits onto the car properly.

If the gas cap no longer fits properly then this can lead to problems with gas fumes escaping and a loss of pressure in the fuel delivery system.

6. Water in the fuel tank

If water is getting into your fuel tank it can cause problems with how your engine runs.

The main symptoms of water in a vehicle gas tank is a decrease in performance and an overall lack of acceleration. The engine may also be difficult to start and fuel economy will be poor.

If water is getting into your cars fuel tank, this may be caused by a badly fitted or failing gas cap. On older vehicles, a tight fitting fuel cap was essential when it came to keeping water out of the gas tank.

Newer vehicles usually have flaps that cover the fuel cap and non return valves at the opening to the fuel tank. This can prevent rain water from getting in and fuel from getting out.

Depending on where you live, a bad gas cap can allow water vapor to build up in the gas tank and this can cause problems with the EVAP system and trigger the check engine light.

What Can A Loose Gas Cap Cause?

A loose gas cap can cause problems with the fuel pressure in the fuel delivery system and may cause the check engine light to come on.

Modern vehicles use fuel injection to get the fuel from the tank to the engine. This system must retain a high pressure at all times. A loose gas cap can affect the fuel pressure in the gas tank, causing a problem with the fuel delivery.

This will sometimes trigger a check engine light, or there may be error codes stored in the ECU that will only show up when a diagnostic is performed.

How do you fix a faulty gas cap?

A faulty gas cap cannot be repaired, and is usually just replaced with a new one.

To check if the gas cap is faulty, remove it and check for cracks or damage to the plastic body of the cap. You should also check the rubber seal that is located near the screw threads. These sometimes become hard or can fall off completely.

If you think that a gas cap is in fact faulty, then the easiest solution is to just replace it. When buying a new gas cap, you should make sure it is a good quality, vehicle specific gas cap that meets OEM specifications.

What is the code for bad gas cap?

A bad gas cap can cause problems with the EVAP system on a vehicle. The EVAP is an integral part of the emissions control system, its role is preventing fuel fumes from reaching the atmosphere.

These gases are the normal result of fuel evaporating inside the tank. The EVAP system consists of a sealed container (fuel tank) that works in conjunction with one or more charcoal canisters that purge the gases back to the engine when the ECU consider it appropriate.

Is it safe to drive without a gas cap?

Yes it is safe to drive without a gas cap for a short period of time. For safety reasons, you should replace the gas cap as soon as possible.

Modern vehicles have non return valves fitted to the fuel tank that help to prevent fuel from coming back out, even without the gas cap fitted. This means that it is unlikely that fuel will spill out when you are driving.

These lights on the dashboard are not serious issues as long as the gas cap is refitted as soon as possible.