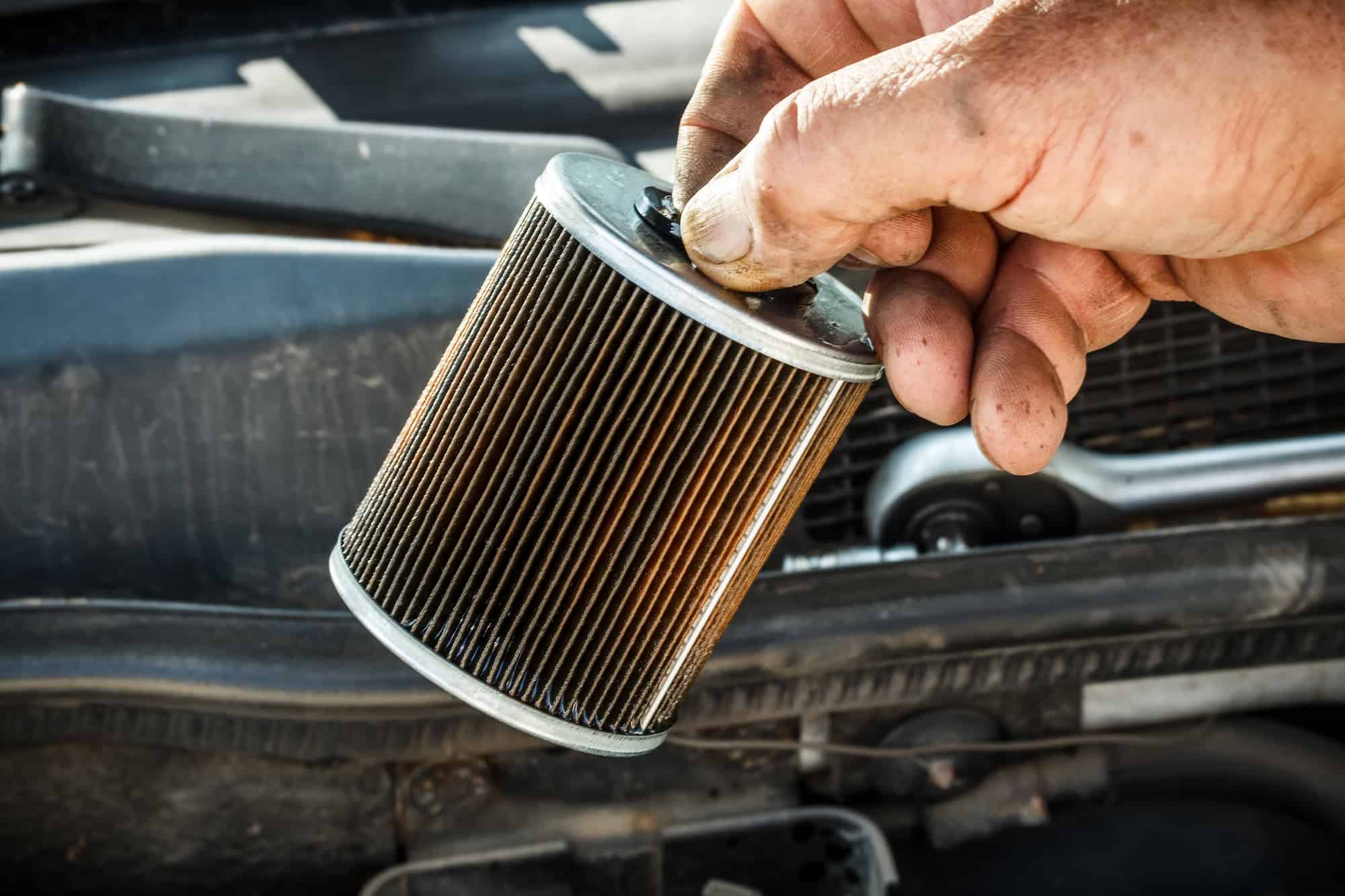 The symptoms of a bad fuel filter include hard engine starts, lack of engine power, engine misfires, and engine stalling.

We can often forget about the fuel filter because it is hidden away under the car or even in the fuel tank. It may not be top of the list when it comes to car servicing, but a bad fuel filter can cause a lot of engine performance problems.

In fact, the signs of a clogged fuel filter are often overlooked when trying to diagnose problems with a car. All of the fuel used by the engine goes through the fuel filter. Its main purpose is to protect the fuel injection system from dirt and water that may have found their way into the fuel.

5 Signs That You Need To Change Your Fuel Filter

The signs of a bad fuel filter can often be confused with other more serious engine problems. Before you start pulling apart the engine, it’s usually a good idea to take a look at the service logs to see what the maintenance history of the car is like.

If a car maintenance has been neglected, then the fuel filter could be to blame for engine performance problems. The number one symptom of a bad fuel filter is lack of power under acceleration, often accompanied by a check engine warning light.

It’s also a good idea to run a diagnostic to see if there are any error codes logged in the ECU memeory. These can often point to a specific engine system, and help with diagnosis. Most vehicles don’t have specific sensors to determine the condition of their engine filters.

If there is a problem caused by a clogged fuel filter, then it will show up as a fuel injection system error. Sometimes these errors can be caused by old or damaged spark plugs. But more often than not, fuel pressure and fuel pump errors can commonly be attributed to a bad fuel filter.

If your car won’t start, it probably isn’t caused by the fuel filter. When your engine starts it will use the fuel in the fuel lines. Unless you are pressing down hard on the accelerator, then it won’t need much fuel to sit idling. A non-starting car will more commonly be caused by a battery not charging.

Here’s an explanation of the most common clogged fuel filter symptoms.

A lack of engine power is one of the most common bad fuel filter symptoms.

An overall lack or engine power in all gears can be due to a lack of fuel getting to the injectors. This can be caused by a dirty fuel filter. The ECU will automatically restrict the engine output to protect the engine. When this happens, the engine will go into ‘limp’ mode and a check engine light will display on the dashboard.

There are of course many other reasons for a lack of power like faulty injectors or mass airflow sensor. It’s worth checking the fuel filter condition first, as this is the cheapest and easiest to fix.

Symptom 2. Engine Stalling When Under Strain

If you find that the engine is losing power under hard acceleration or going up a steep incline, then it may be down to a bad fuel filter. If the filter is nearly clogged up with debris, this will limit the amount of fuel getting through it. It may be ok under normal driving conditions, but the extra fuel needed to accelerate may not be available if a filter is blocking it.

Lack of acceleration can often be mistakenly attributed to a faulty sensor or a vacuum leak. That’s why a fuel pressure test is the best way to test if the fuel coming out of the filter is impeded by excess dirt.

Another symptom that can occur under heavy load, is random cylinder misfire. Sometimes these will show up as error codes, or the vehicle might stutter a bit going up a hill under load. Common causes of engine misfires include faulty ignition coils, bad spark plugs, and failing engine sensors such as a bad camshaft sensor, mass airflow sensor, or even a bad MAP sensor.

The fuel filter may be restricting the amount of extra fuel getting to one or more of the injectors, causing the misfire. It’s worth noting that a clogged fuel filter won’t cause a car to misfire while stationary. Modern cars use very little fuel when idle. Unless the fuel filter was completely blocked, it is will probably be caused by something else.

If a fuel filter gets really blocked then it can start to break down inside. Fuel pressures can be as high as 120 Psi in some fuel systems and if the fuel filter is no longer permeable then it can start to degrade under the pressure of the fuel. If this happens then the fuel that is getting to the fuel injectors and fuel pump is no longer being filtered properly and can cause damage.

Fuel filters fitted to diesel engines often filter out potentially damaging water vapour that may be in the diesel. Water is particularly harmful to the inside of fuel pumps and fuel lines as it can cause rust and debris buildup if left unchecked.

In diesel engines, if a fuel filter becomes completely blocked this can ruin a fuel pump very quickly. The fuel pump uses diesel fuel as a lubricant that protects the inner surfaces of the pump. Allowing a fuel pump to operate ‘dry’ even for a minute or two can shorten its life considerably.

As mentioned above, a bad fuel filter probably won’t stop your engine from starting, but it can mean that the engine needs to turn over a few more times before it gets enough fuel pressure built up to keep it running.

Sometimes if the fuel filter is nearly blocked the fuel pressure sensor located on the fuel rail will detect an out-of-range fuel pressure reading. The ECU can then stop the engine from starting to protect the fuel system from damage.

A bad fuel filter can also cause a reduction in fuel pressure when a vehicle is left to sit overnight. When you turn off the engine in your car, the fuel is no longer being pumped under pressure from the fuel tank to the engine. However, the fuel system should maintain constant pressure, even when the engine is off.

A badly worn fuel filter can cause a leak in the system which allows the pressure to drop slowly if left to sit for a few hours. This can make the engine more difficult to start as the fuel will need to be pumped back into the system when the engine is cranking. A leak in the fuel system can be easily diagnosed by carrying out a fuel pressure leak-down test.

Why Is It Important To Change a bad fuel filter?

A fuel filter removes any dirt or debris from the fuel before it can get to the fuel injection system.

Most cars have one fuel filter fitted. The fuel filter on petrol cars are usually located in the fuel tank and are not easily serviceable. Diesel fuel filters are fitted somewhere along the fuel lines or in the engine bay before the injector rail.

Over time, the filter will become less porous and will need to be changed. Sometimes the fuel filter will get clogged up so badly that it will start to affect the running of the engine. It’s more common for diesel fuel filters to become clogged and they should be changed at an interval of every second oil change.

Fuel passes through the fuel filter using the pressure generated by the fuel pump. The inside of the filter is made up of pleated, permeable material. It allows the fuel through under pressure but blocks dirt particles.

Over time, the filter material will become dirty, and less permeable. This will restrict the amount of fuel that can get through it, and to the engine.

It’s important that the fuel filter is changed regularly. Most manufacturers will recommend that it is changed every 30,000 Miles ( 50,000 Km). This may vary if the car has a diesel engine, or if it is driven under extreme conditions.

Many passenger cars now come with a fuel filter located in the fuel tank. These are not easily changed and are supposed to last the lifetime of the car. In reality, these filters are usually much larger than the serviceable kind, so they may last around 100,000 Miles.

When should you Change a Fuel Filter?

Most serviceable fuel filters are good for around 30,000 Miles. If a fuel filter change is recommended by a manufacturer, they may do it every 2-3 oil changes, especially if it’s a diesel engine.

How do you change a bad fuel filter?

Fuel filters are fairly cheap and can be changed easily by a competent DIY mechanic. It’s impossible to describe the process for all cars, but here are a few things to remember before you start.

What tools do you need to change a bad fuel filter?

When it comes to changing a fuel filter, there are a few different types of fuel hose connectors used in fuel systems. Many newer vehicles use snap-on connectors that can easily be removed by squeezing the tabs on the side of the connector plug.

Another popular connector utilizes the garter spring design. To remove it, you’ll need a special tool that pushes back an innerspring to release the connector.

A master disconnect set contains everything you’ll need to tackle any fuel line connector on any vehicle. They often include tools for disconnecting air con, transmission, and coolant lines too.

You don’t need to spend a lot of money on a good set of disconnect tools, especially if you are only going to use it occasionally. I recently bought a set made by OEMTools on Amazon and it can be used on a range of connector sizes. You can also use it on air-con and clutch hoses too.

What happens if you don’t change a bad fuel filter?

Not changing the fuel filter regularly can lead to engine performance issues, and check engine error lights showing up on the dash. These issues can usually be remedied by fitting a new filter.

Sometimes, an old filter can fail to trap debris and may start to break down internally. If this happens it can lead to serious and costly engine damage. Fuel injectors can become clogged very easily, and this will cause significant damage to an engine.

So it’s important that the fuel filter is not overlooked when it comes time to service your car. If you want to be extra vigilant then change it once a year, especially if you are racking up high mileage or driving under extreme conditions.

A bad fuel filter usually isn’t the end of the world, but it could keep you off the road until it has been replaced.

How much does it cost to replace a bad fuel filter?

Fuel filters are cheap to buy and usually cost between $10 and $30 for a standard, serviceable fuel filter. A fuel filter that is not serviceable, like those positioned in the fuel tank can be more expensive and much more difficult to replace.