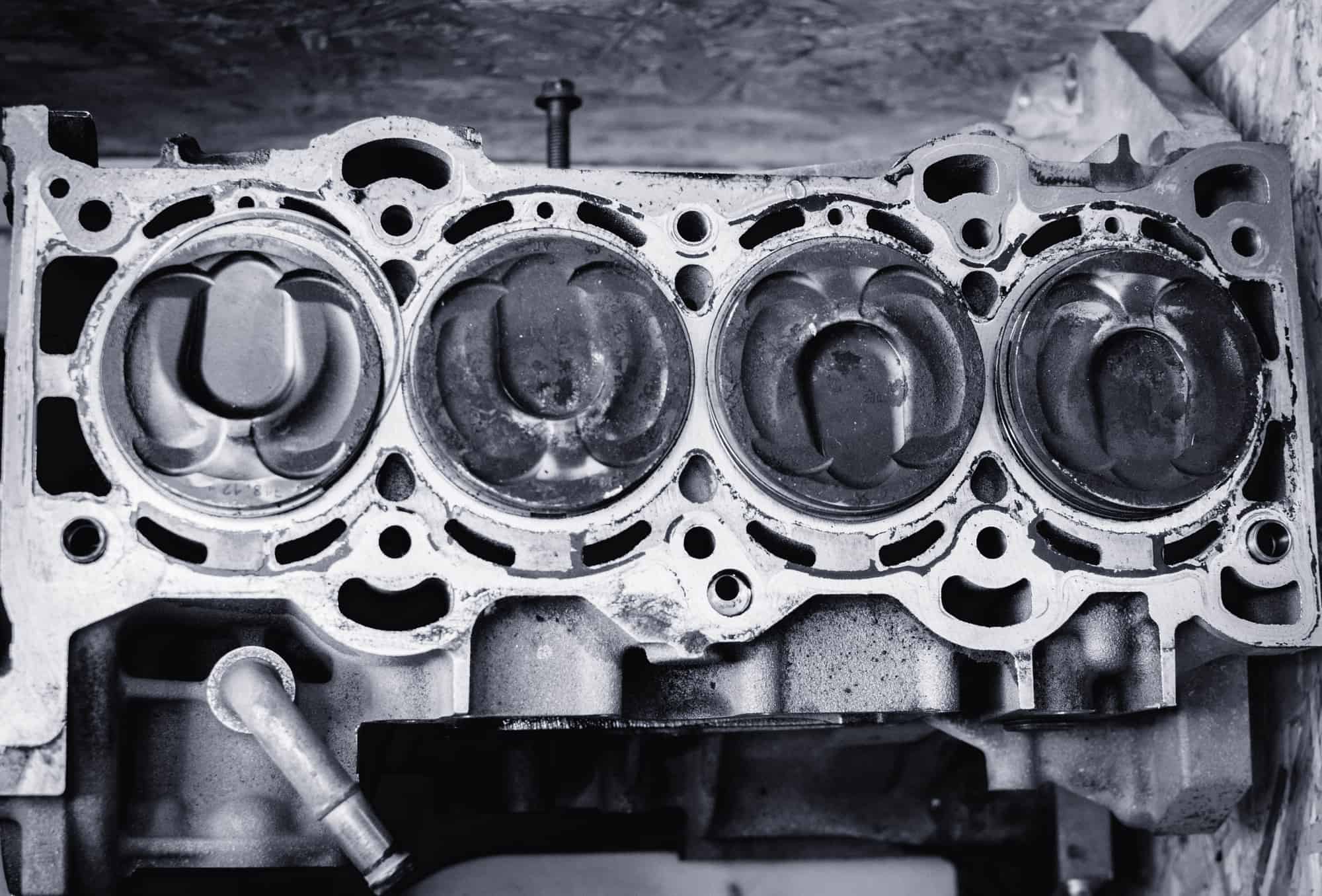 The pistons in your engine work under extreme conditions, both in terms of heat and high pressures. Over time, and as a result of these extreme conditions, they can sometimes fail. One type of piston failure is a cracked piston, and this will cause specific engine performance symptoms.

As a general rule, cracked piston symptoms include white or blue exhaust smoke, excessive oil consumption, a decrease in engine performance and engine power, and a reduction in engine compression for the affected cylinder.

Pistons will normally crack in two ways. The crack can appear at the top of the piston, on the crown, or down the side of the piston as far as the pin boss hole. Both cracks will lead to piston failure and can cause the type of symptoms described in this article.

5 Symptoms of cracked pistons You Should Never Ignore

Cracked pistons are not very common in normal engines. They are usually a sign of extreme damage to the engine, and are more common in engines that operate under extreme conditions, such as commercial diesel vehicles.

Cracked pistons can be difficult to diagnose, as their symptoms are similar to broken piston rings. To make an accurate diagnosis you’ll need to strip down the engine and remove the pistons for closer inspection.

The following are the initial symptoms of cracked pistons that may warrant further investigation.

A very common symptom of cracked pistons is loss of engine oil. It can be difficult to diagnose this as it may look like there is no apparent oil leak.

A cracked piston can cause excessive oil consumption if the oil that is supposed to lubricate the piston within the cylinder, manages to bypass the piston rings and enter the combustion chamber.

Oil in the combustion chamber is bad news for your engine. Not only is there less oil to lubricate the engine, but the oil will also damage the inside of the engine cylinder and can adversely affect the exhaust system. A small amount of oil inside the cylinder will burn off and create blue exhaust smoke. Over time, carbon deposits left over from the burning oil will build up inside the cylinder causing damage to the valves, spark plugs and the cylinder wall.

If there is a lot of oil leaking into the cylinder then this will cause engine misfires, a reduction in fuel economy, and a reduction in overall engine performance.

A cracked piston will cause a noticeable decrease in engine power. This can occur for a number of reasons such as decreased cylinder compression, burning engine oil, and a change in the piston-to-wall clearance.

Symptom 3: Excessive Grey Or Blue smoke from the Exhaust

Symptom 4: Banging or clapping noise from the top of the engine

A cracked piston can also make a distinct slapping noise, especially when the vehicle is accelerating. It is often described as a bell-like rattling or knocking sound and is commonly referred to as piston slap.

Piston slap is caused by damage or excessive wear to the piston. The banging or clapping noise is the piston hitting against the cylinder wall as it moves up and down.

Symptom 5: Lack of compression in the affected cylinder

Another common symptom of a cracked piston is a drop in cylinder compression. Similar to piston ring failure, a cracked piston may affect the seal between the cylinder and the engine block, allowing oil in and air out.

A simple cylinder leak-down test will confirm if there is a problem with the piston seal and its ability to maintain the proper pressure. To confirm a cracked piston, the engine will need to be stripped down and the pistons removed for inspection.

The pistons in modern engines are designed to last the lifetime of the vehicle, and under normal circumstances they don’t crack.

Pistons are usually made from an aluminium alloy, although some high performance vehicles use steel pistons. Aluminium is very well suited to the internal conditions of the engine. Its easy to fabricate into pistons and has a high thermal conductivity.

Even though pistons are designed to work under high pressure and high temperatures, they can still fail if the conditions are excessive.

In general, a cracked piston is caused by excessive engine loads and excessive, localised temperatures.

Here are a few of the common causes of cracked pistons.

Detonation is when the fuel mixture detonates before it is supposed to and before the piston has reached the top of the cycle. This can cause extreme heat spots at the piston crown as the detonation tends to occur at a localised spot in the cylinder.

Engine detonation can be happen for lots of reasons, but is often the result of incorrect engine timing. It can also be caused by an incorrect fuel to air mixture, bad fuel injectors, broken engine sensors, a blocked fuel filter, or a fuel pump that is not working properly.

An overheating engine can have many causes some of which include a coolant leak, low engine oil, a broken engine thermostat, a broken auxiliary fan or low coolant levels.

3. Using the Wrong viscosity engine oil or the wrong type of oil

Engine pistons operate in extremely tight conditions and it’s essential that they remain well lubricated at all times. The piston-to-wall clearance (the space between the outer piston surface and the cylinder wall) must remain lubricated when the engine is running. Because the distance between the surfaces is so small, it will only allow for a light film of oil to pass through.

if the wrong type or viscosity of oil is used it may not adequately lubricate the piston walls, leading to over heating and friction.

One of the biggest causes of cracked pistons, and damage to the engine is incorrect valve timing. Most modern engines have at least 4 valves per cylinder that must open and close at the right time and in the right order for the engine to operate properly.

The timing of the engine is controlled by a timing belt or timing chain. If it’s a timing belt, this will need to be changed at regular intervals to prevent engine damage. If the timing belt is failing it may skip a tooth on the camshaft sprocket or it may stretch, knocking the timing out. The symptoms of a bad timing belt include engine misfire, lack of engine power, strange ticking or tapping noises, and excess smoke from the exhaust.

If the engine timing is off this will affect the timing of the valves and may even lead to the valves hitting the piston crown.

It can also affect the timing of the fuel entering the cylinder and the exhaust fumes leaving. This can cause premature ignition (detonation) of the fuel and combustion of the fuel when the piston is not at the top of its cycle.

A cracked piston will make a tapping, slapping, or banging noise when the engine is running. This is most commonly caused by the piston knocking against the cylinder wall as it moves up and down.

A cracked piston can also make a tapping sound that can either sound like a single tap or a double tap, depending on where the piston is damaged. If the damage is to the base of the piston then it will sound more like a double-tap as it taps loosely against the connecting rod as it reaches the bottom of the cylinder and again as it begins to rise again.

Check out the video below that demonstrates the sound of a cracked piston and the effects it has on an engine when it is running.

2. How Much does it cost to fix a cracked piston?

You can expect to pay over $1000 to have a cracked piston replaced. In some cases the cost may rise to $3000-$4000, depending on the amount of damage the cracked piston has caused.

A cracked piston will always need to be replaced. Other parts such as the head gasket, valves, valve seals, and piston rings may also need to be replaced too. This involves stripping down an engine, removing the cylinder head, and replacing the piston. This is a very labor-intensive process and can only be carried out using specialist tools and knowledge. For these reasons replacing a cracked piston can be very expensive.

3. Can you drive with a cracked piston?

Yes you can drive a car with a cracked piston but it is not advisable to do so.

A piston can crack in a number of different ways, leading to internal damage to the engine or just misfires and extra exhaust smoke. It’s impossible to know how badly damaged a piston is without removing it from the engine. So if you suspect that your engine has a cracked piston it’s advisable not to drive it too far without getting it checked out.