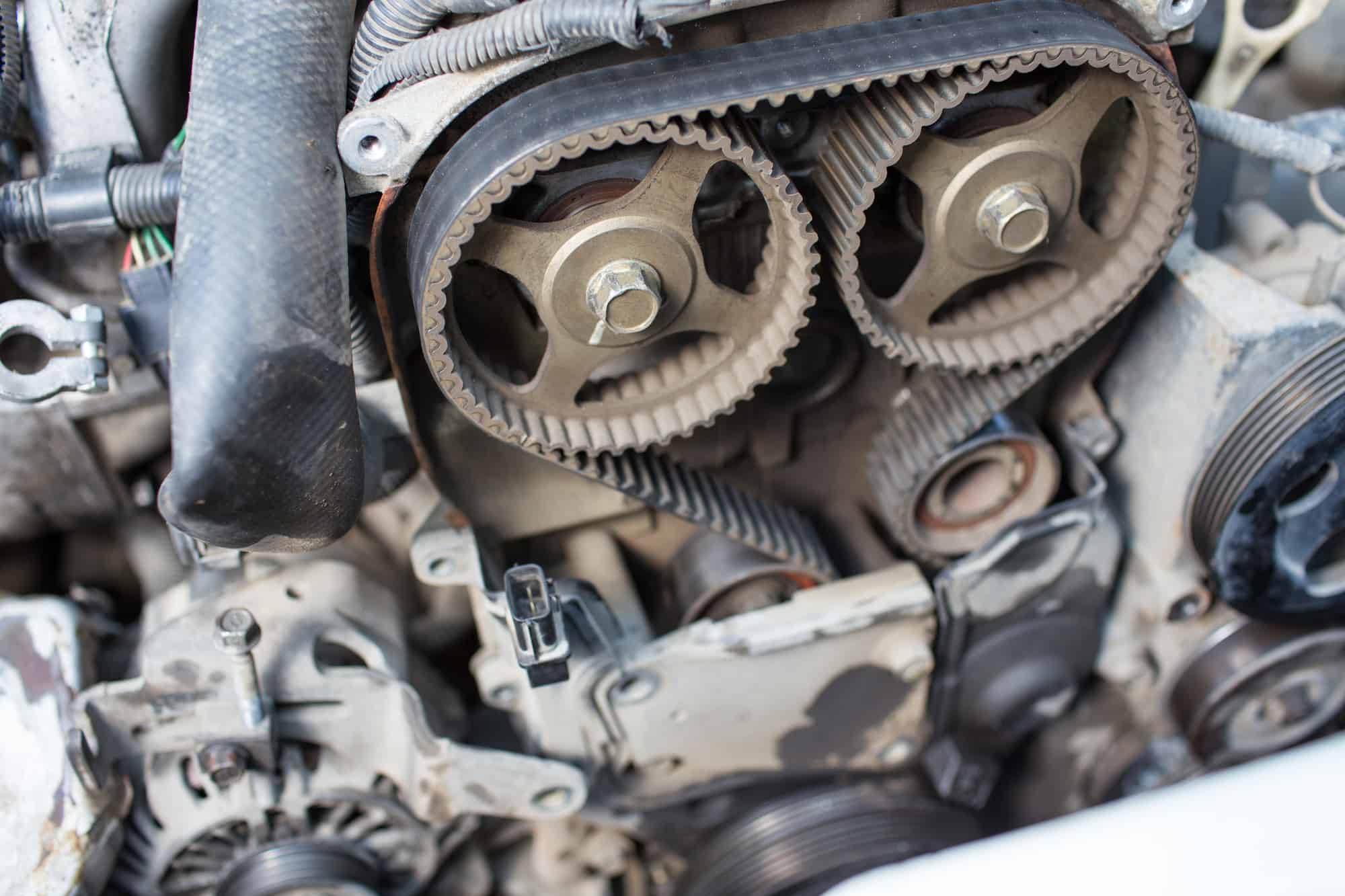 Bad timing belt symptoms include an engine that misfires or won’t start, lack of engine power and a loud ticking noise coming from the engine bay.

The timing belt fitted to your car is responsible for keeping the engine running smoothly. It does this by locking the rotation of the crankshaft and camshaft and keeping them in sync with one another. This ensures that the engine pistons move up and down in time with the opening and closing of the fuel and exhaust valves.

If the timing belt breaks, it can cause catastrophic engine damage, especially if the engine is an interference engine where the pistons and valves can come into contact.

A timing belt doesn’t have to fail completely to before it shows signs of wear.

If the timing belt is failing or has failed, the engine may not start or if it does it will run really badly. Sometimes a timing belt can become badly worn and can stretch slightly. This will affect the timing of the engine and can cause it to run inefficiently. This will result in low power output, especially under heavy loads. It can also lead to bad fuel economy and regular engine misfires.

Here are the most important signs that the timing belt needs to be replaced.

If the timing belt has completely snapped, then the engine will not be able to turn over. This is because the timing belt connects the camshaft and valves to the crankshaft.

It’s also worth noting, that the majority of timing belt failures occur on engine startup. This is down to the huge force needed to turn over an engine.

If the timing belt is slipping, then this will lead to problems with the timing of the engine. This will affect the synchronisation of the inlet and exhaust valves and when they open and close.

A timing belt that has jumped even one tooth on the camshaft can lead to an engine that runs rough. Sometimes engine misfires can be the first sign of problems with a timing belt. It usually shows up as a check engine light on your dashboard as the ECU picks up on a problem with the fuel delivery to the cylinders.

If the engine timing is out, then you can expect a loss of engine power, especially under hard acceleration. You may also notice an engine that doesn’t sound right when idling, and may even cut out when you are stopped in traffic.

This can all be caused by a loose or damaged timing belt that has slipped on the camshaft. This will affect the timing of the engine valves and may cause the ECU to intervene and cut the power to protect the engine.

4. A loud ticking or tapping noise from the engine

Sometimes if you know what to listen for, there can be a bad timing belt sound that will come from the engine, especially while idling.

A loose timing belt will cause a ticking or tapping noise from the top of the engine. This is usually caused by a lack of engine oil at the top of the engine due to low oil pressure. The ticking noise that you are hearing are the valves and tappets moving up with less lubrication than they need. Sometimes a low oil pressure warning will also flash on and off on the dashboard to let you know there is a problem.

It is also sometimes possible to hear a rubbing noise as the engine idles. This can be the side of a worn or loose timing belt rubbing against the plastic timing belt cover. If left unchanged, the belt will eventually weaken and snap.

5. White or blue smoke from the exhaust

If the timing belt has stretched or has jumped a tooth then this will affect how efficiently the engine burns fuel.

The engine ECU will attempt to correct a decrease in fuel combustion efficiency by tweaking the fuel to air ratio in the cylinders. This often means an increase the amount of fuel that is used by the engine, causing it to run rich. Too much fuel usually results in unburnt fuel entering the exhaust and this can make the exhaust gases appear blue or white.

If the engine utilises variable valve timing, the ECU may also try to alter the timing of the inlet valve to improve efficiency. A bent intake valve can trigger the OBD error code P0011, if the ECU mistakes the problem for a camshaft timing issue.

How long can you drive with a bad timing belt?

You cannot drive a car at all if it has a bad timing belt, without risking serious damage to the engine if the timing belt completely fails.

On many cars the timing belt also drives the water pump, this is an important job as it keeps the engine cooling system running properly. It can also run the oil pump too on some cars. If the timing belt brakes or is loose, this can cause a drop in oil pressure and can cause the characteristic ticking noise associated with a bad timing belt.

How often should a timing belt be replaced?

In the past, most timing belts needed to be replace approximately every 50,000 to 60,000 miles. Many cars today are fitted with long life timing belts that can last up to 150,000 miles. It’s best tot check with you vehicle handbook to see the service interval of the timing belt.

What happens if you don’t replace a bad timing belt?

If you neglect to follow the recommended service interval for the timing belt fitted to your car, you run the risk of causing serious engine damage.

In my experience, most timing belts that I have seen come off of engines, actually look in good condition. However, looks can be deceiving. The timing belt in your car is subjected to massive forces, and a lot of abuse over its lifetime. This can lead to virtually invisible cracks and hardening of the reinforced rubber, making it more likely to fail as the miles increase.

It is really important therefore to replace the timing belt when recommended. This is on average every 60,000 miles, but can be more in some cars or less if the car is driven hard or you live in a harsh climate.

If the belt is not changed, you run the risk of causing serious engine damage. If the engine timing changes, due to a slipped timing belt or even worse a completely torn timing belt, then the engine can suffer expensive internal damage.

If your car has an interference engine, this means that the pistons and valves occupy the same space in the engine cylinders, but not at the same time. If the timing belt breaks, this can cause the pistons to crash off the valves and damage the inside of the cylinder and possibly bending or breaking the valve arms.

If the car doesn’t have an interference engine, then you will most likely get stranded with a car that won’t start, but once the belt is replaced you will be back on the road without any further need for repairs.

How much does it cost to replace a broken timing belt?

The average cost of a timing belt replacement is approximately $500. This can go as high as $800-$1000 if there is a large amount of labor involved.

You should also keep in mind that the pulleys, tensioners and sometimes the water pump need to be replaced with the timing belt. If the water pump has to be changed too, this will involve draining the engine cooling system and refilling and bleeding it when the job is complete.

Here’s a list of 15 popular vehicles and the approximate cost of a timing belt change (excluding taxes and fees) in a garage or dealership.

If you plan on changing the timing belt yourself, then this is one job where there are significant savings to be made. Depending on the make and model of your vehicle, a timing belt kit can usually be bought for anywhere between $80 to $150. This will usually contain everything you need to complete the job, and will be cheaper than using parts supplied by a mechanic or dealership.

If you are buying a timing belt kit online or from a parts store, be sure to buy a good quality aftermarket brand. I usually only buy Gates timing belt kits as they are excellent quality and are often fitted by car manufacturers in the factory.