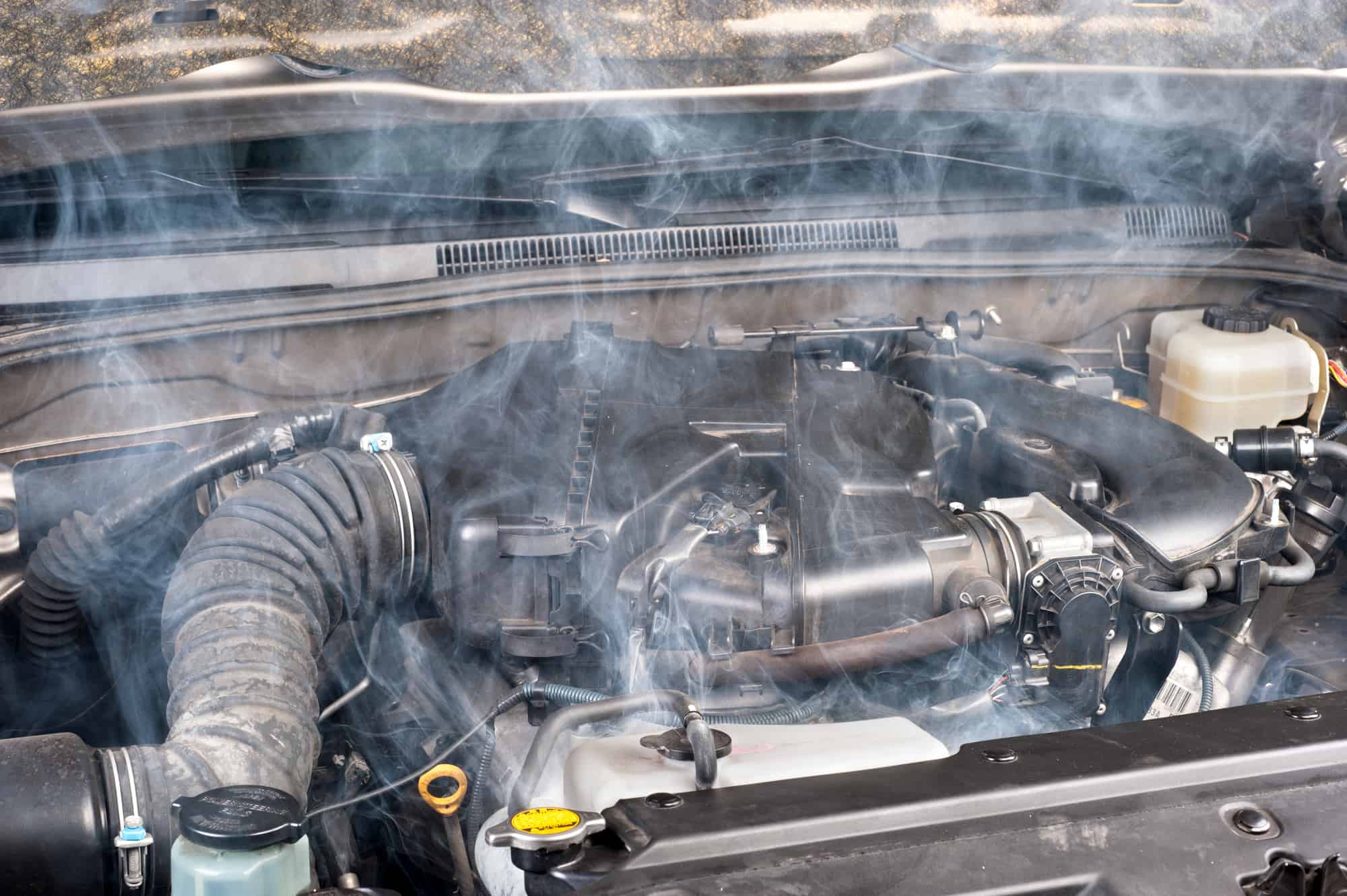 One of the most common reasons for a car to break down or over heat is because of a coolant leak. Coolant is more likely to leak from a car when the engine is running because it is hot and under pressure.

As a general rule, the causes of a coolant leak while an engine is running include a burst or cracked coolant hose, a leaking radiator, a leaking coolant reservoir cap, a bad water pump and a blown head gasket.

Coolant is much more likely to escape from a cracked hose or from a leaking gasket when the engine is running. This is because the coolant is being pumped under pressure around the engine and any weakness in the coolant system will make it more vulnerable to leaks.

How Can Coolant Leak From A Car That Is Running?

It is very common for coolant to leak from a vehicle that is parked if there is a cracked hose or leaking radiator present. This is because the coolant will settle at the lowest point in the engine as it is no longer being pumped under pressure. If there is a hole or crack then coolant will leak out.

If the engine is running the coolant doesn’t get a chance to pool in one particular area of the engine making it less likely to get a coolant drip. However, the coolant may still escape if the leak is at a point of high pressure such as the water pump.

Or it may escape as a vapor if the leak is at place in the engine where the coolant is being cooled such as the radiator fins or radiator cap.

Here are the most common places that coolant will leak from when the engine is running.

1. From a cracked or burst coolant hose

The most common cause of a coolant leak when the engine is running is a cracked rubber hose. Hoses tend to harden and can become brittle as they age. This makes them prone to cracking and splitting.

A cracked coolant hose is usually pretty easy to spot as the coolant will often escape as a steam or vapor if the engine is hot.

2. From a leaking radiator

The radiator is one of the most common places for coolant to leak from. This is because the vast majority of radiators used in cars are made from metal. Metal alloy radiators can transfer heat much more efficiently than plastic radiators, but they are also more likely to corrode and leak as they age.

When the engine is running, coolant is pumped around the engine at high pressure. Coolant is taken from the hot parts of the engine and is channeled through the radiator where it is cooled before returning to the engine. The radiator has fins that increase its surface area so it can work more efficiently. These fins can sometimes get blocked and can corrode causing tiny holes to appear that can cause leaks.

The radiator can also have a top up cap, a drain bung and hoses connected. These are all potential places for coolant to leak from, making the radiator a very common source of coolant leaks.

3. From A Leaking Radiator or Coolant Reservoir Cap

Another very common place for coolant to leak from is the radiator or coolant top up cap. This cap is sometimes located on the top of the radiator, and sometimes it is on a separate coolant overflow reservoir.

When the engine is running, the coolant heats up and is pumped around the engine. This causes an increase in coolant pressure of up to 30 PSI. The radiator cap is designed to operate under high pressure, but it also can act as a release valve, allowing coolant back into the over flow reservoir if the coolant pressure increases too much.

Over time, the rubber seals on the radiator cap can harden and loose their ability to create a proper seal.

As the radiator cap wears, the pressure spring can weaken thus allowing coolant into the reservoir at a lower coolant pressure when the engine is cold. This leads to a reduction of coolant flowing around the engine and a less effective coolant system.

4. From A Bad Water Pump

A bad water pump is also a common place for coolant fluid loss especially when the engine is running. Coolant can leak from the water pump impeller, the weep hole or from the engine block gasket/seal.

5. From A Leaking Head Gasket

A leaking head gasket usually starts off small and is often only noticeable when the engine starts to overheat. Coolant levels will drop but there is usually no noticeable leak. You may also notice a drop in engine oil levels and excessive smoke from the exhaust.

If the cylinder head seal is leaking then this can cause the engine to overheat and can cause massive engine damage.

The most reliable way to quickly locate a coolant leak is to pressure test the coolant system. Pressure testing the system allows you to safely simulate coolant pressure when the engine is turned off.

Step 1  – Before you start, check the amount of coolant in the coolant reservoir and top it up with water if necessary. Don’t use coolant to top it off, as you’ll only waste coolant if there is a leak in the system

Step 2  – You’ll need a handheld pressure tester to pressurize the system. You don’t need to purchase a big expensive kit, a basic pressure tester with a few adapters will do.

Step 3  – Now slowly start pumping the tester. If there is a leak in the system you may start to hear coolant dripping as you increase the pressure. As you are checking for a leak that occurs with the engine off, you probably won’t see any leaks yet.

Step 4  – When the system is fully pressurized, leave it for 5 minutes and then start checking for leaks. Common areas for leaks to occur are at hose joints, the bottom of the radiator, around the water pump and around the base of the coolant reservoir.

Step 5  – If there are no leaks at full pressure, release some of the pressure from the system, wait a few minutes and check again for leaks. Repeat this process until the system is fully de-pressurized.

Step 6  – If you still can’t find the source of the coolant leak, top up the coolant reservoir again and double check that there are no coolant wet patches on any of the hoses or around the radiator. Leave the engine for 30 minutes before checking again. You may need to repressurize the coolant system again and depressurize it to simulate the engine running and turning off.