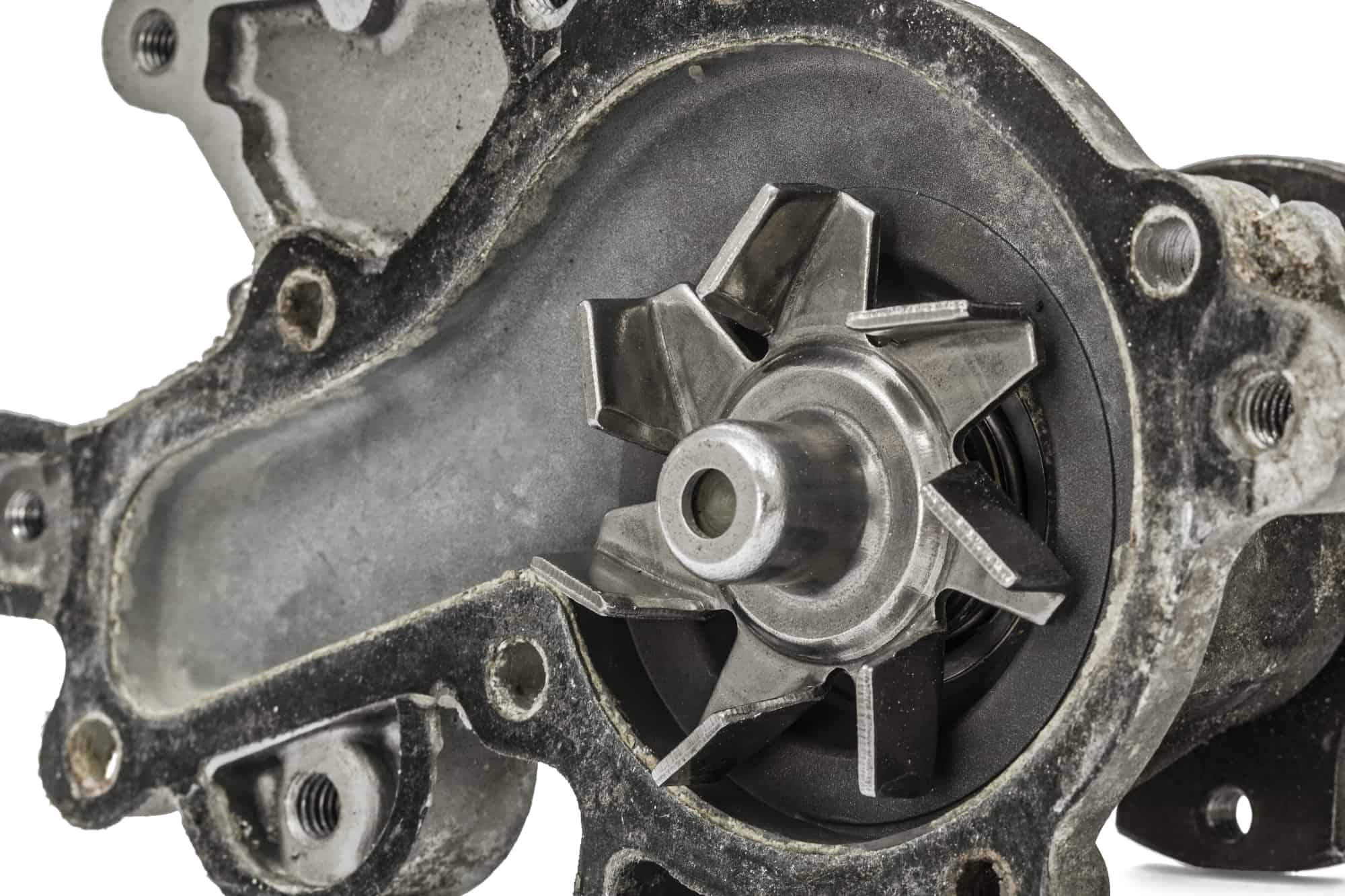 Most water pumps these days are designed to last 100,000 miles or more. If you regularly flush the coolant and ensure the auxiliary and timing belts are changed on time, then it’s not unusual for the water pump to last the lifetime of the car.

6 Signs of a bad Or Failing Vehicle water pump

Water pumps tend to fail slowly over hundreds or even thousands of miles. They generally start to show symptoms of failure long before they actually give up completely.

If you know what to watch out for, you should be able to spot the signs of a failing water pump before the water pump fails completely.

If your car has a timing belt fitted, then the water pump is usually driven directly by the timing belt. On cars fitted with timing chains, the belt is more commonly driven by an auxiliary belt, that may also drive the air conditioning compressor and alternator.

Either way, the water pump is not usually that easy to access, and can be hidden away behind hoses and belts.

Ultimately, the only way to absolutely check for a badwater pump, is to remove it from the vehicle.

However, before you start draining the coolant system and taking apart the engine, here are some common symptoms of a bad water pump that you should never ignore.

1. Coolant or oil leakage From The Water Pump

A common sign of a failing water pump is fluid loss from the coolant system or oil leaking from the water pump.

Water pumps have a built in safety feature (the weep hole) that can sometimes warn you of impending failure of the water pump before it happens.

Fluid dripping from the weep hole usually only occurs when the engine is running and the internal water pump impeller is rotating. If you notice coolant is leaking overnight of after you park the vehicle, this can point to a leak from somewhere else in the system

Sometimes, there may be a large amount of coolant leaking from the water pump. This can be caused by a failed water pump sealing gasket. This is the gasket between the water pump and the engine block. It doesn’t usually fail catastrophically, but it can start to leak slowly, especially on older vehicles.

2. The Water Pump is Noisy when running

Bad water pump noises include grinding, squeaking and squealing noises that can be caused by worn shaft bearings or wear to the internal impeller blades.

This can happen as the water pump gets older, or may be caused by lack of proper servicing.

If the internal shaft bearings start to wear, this will affect the belt pulley and how it rotates. If the pulley makes a whining or grinding noise as it rotates, then this points to a worn out water pump that could fail at any time.

Sometimes the noise can be caused by the rotation of the pump impeller blades inside of the water pump. If the blades have become damaged, rusty or clogged with dirt from the coolant, this can cause a noise and can mean that the water pump is ready to fail.

3. Squeaking Noises From around the water pump

Sometimes the noise associated with a failing water pump is caused by a fault with the water pump pulley itself.

All belt driven water pumps have a pulley on the front that allows the water pump to be driven by a serpentine belt. As the water pump gets older, the pulley can become loose and this can affect how it rotates.

4. Build up of dried coolant around the water pump

As mentioned above, sometimes a water pump will leak from around the mounting surface. This is caused by an improperly mounted water pump, or a failing gasket seal.

Most of the time the leak won’t be very big to begin with. Instead it will appear as small spots of dried out coolant that look white or chalky in appearance. Over time, this can progress to a larger coolant leak or a rusty coating on the water pump. If a large amount of coolant is leaking from the water pump, then this can point to failure of the mounting gasket.

Not all water pumps use a gasket. Some are sealed using a wet sealant that dries and hardens after installation when it is heated by heat from the engine block. If the wrong sealant, or wrong amount of sealant is used, this can cause it to fail more quickly, or not to seal at all.

5. the engine Over Heats Regularly

An over heating engine is one of the most common symptoms of water pump failure.

An overheated engine can be caused by a bad water pump

If your engine is overheating, this can be caused by internal problems in the water pump such as a damaged impeller or leaking seals.

Damage to the rotating impeller fins will affect how efficiently the water pump actually pumps the coolant around the engine. If it’s not pumping the coolant as quickly as it should, this can contribute to the engine overheating, especially on a hot day or if you are stuck in traffic without much air coming in through the radiator.

An over heating engine can also be caused by lack of fluid in the coolant system. Even a small leak from the water pump can cause the coolant levels to drop fairly quickly, and this can have devastating affects on the ability of the engine to stay cool.

If the engine overheats it can be a sign that the water pump has failed completely, so you should not drive the vehicle until you get it checked out so as to avoid a costly repair bill.

Another very common sign of a failing water pump is steam coming from the engine bay (the radiator) and the engine cooling fan running when it is not expected to run.

These are both signs that the engine temperature is higher than it should be, and that there is a problem with the coolant system, and possibly the water pump.

If you see steam coming from the under the hood you should stop the car as soon as it’s safe to do so and get help or investigate it further. A failing or failed water pump will cause an engine to overheat very quickly and this will result in coolant burn off that will cause steam to escape from the coolant pressure valve (if fitted).

1. when should you consider replacing a bad water pump

The water pump should be replaced when it starts to show symptoms of failing. If the water pump is leaking coolant from the mounting seal or from the impeller shaft, then it is going to fail completely at some stage. If the bearings are worn or the pulley feels loose or makes a noise when rotating, this is also a sign of a failing water pump.

It’s also advisable to change a water pump as a preventative measure when the timing belt is being changed, or if the engine has covered over 100,000 miles and the water pump has never been changed.

2. is it safe to drive with a bad water pump?

No, you should not drive a vehicle with a broken water pump. If it is showing signs of failing, you can still drive it, but you should get it replaced as soon as possible before it fails completely. Small leaks from the weep hole or dried coolant around the edge of the water pump are common signs of a leaking water pump and can get worse over time if not fixed.