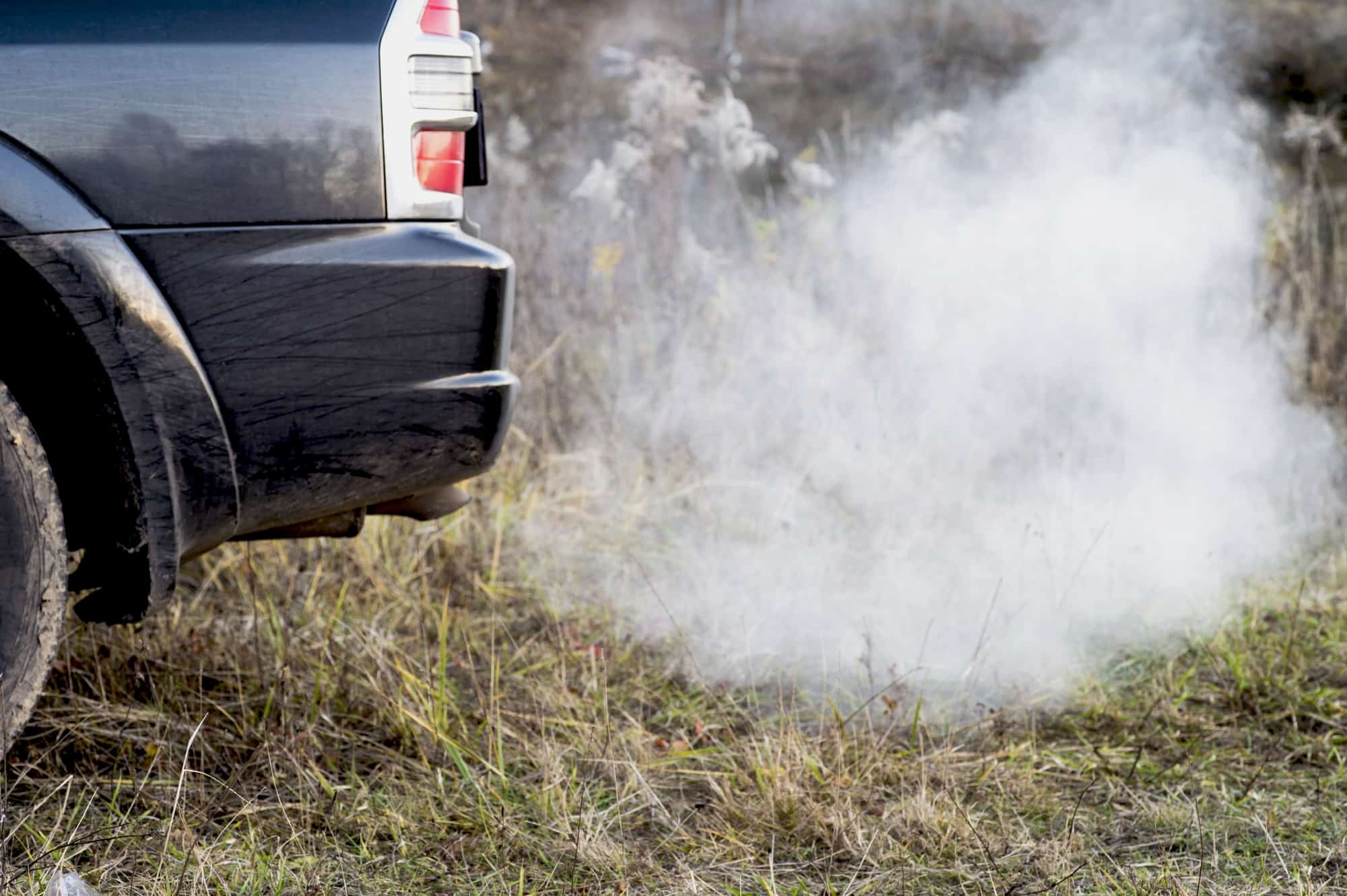 White smoke coming from the exhaust of your car can be caused by condensation in the exhaust, a cylinder head gasket that has blown, worn piston rings, a valve seal leak, or even an engine block coolant leak.

Most of the time, white smoke coming from the exhaust of your car is nothing to worry about. But if you suspect there’s a problem with the way your car is running then white smoke might be a sign that there is in fact something wrong.

This article explores what causes white smoke from the exhaust, how to diagnose the problem and what you can do to fix it.

Here’s a run down of the most common causes of white smoke from the exhaust.

1. Condensation In The Exhaust

This is the best case scenario. It’s caused by a lot of condensation in the exhaust pipe. White smoke is then produced by water transforming into steam when it is heated by the exhaust gases.

This happens very often in cold climates or areas with high humidity.

Condensation is a normal process that doesn’t affect your engine. It may corrode your exhaust pipe as time passes, but it’s not something you need to worry about.

Generally, this type of white smoke will be thinner, more white than grey in colour and may not have any odour.

At the other end of the scale is a blown head gasket, unfortunately this one is bad news.

When the head gasket fails, pressurised coolant may enter the combustion chamber during the intake stroke because there is a suction that pulls coolant into the cylinder.

A blown cylinder head is probably the worst scenario

Then during the compression stroke coolant starts changing to vapour due to the high pressure/temperature. The explosion stroke vaporises the rest of the liquid coolant and during the exhaust cycle what you have is white smoke (water vapour).

A critical issue with this type of leak is that during compression and explosion cycles, fuel is also pushed back to the coolant system. Liquids are not compressible, so during those cycles, part of the coolant passes to the oil pan through the piston rings.

In other words, the white smoke coming out from the exhaust becomes the least of your problems!

In a short period of time, you will have fuel mixed with the coolant and coolant mixed with the engine oil. As you may guess this could potentially destroy the engine components due to a severe lack of lubrication.

Another worst case scenarios, a cylinder head coolant leak, is common after an engine overheats.

A coolant leak in the cylinder head will inevitably end up contaminating engine oil and thus posing a risk to all engine components in a similar fashion to a blown head gasket.

It only requires a small crack in the cylinder head to start a coolant leak. Modern cylinder heads are made of aluminum, a material with a high thermal expansion coefficient, that’s why when an overheating event happens heads tend to warp.

On occasions, the damage goes beyond warping producing a small crack. When cylinder head coolant leaks, the consequences are pretty similar to a blown head gasket. However, its severity is considered higher due to the accelerated engine oil contamination.

Another reason for white smoke coming out from the exhaust is an engine block coolant leak produced by an internal block crack.

Extreme engine overheating is the main reason for these sort of cracks. A bad water pump, driving with a low coolant level, overpowering the engine, and casting failures are among the causes of these levels of extreme overheating.

Once the engine block fails, the coolant may contaminate the oil and the cylinder(s), similar to a blown head gasket. A broken engine block is the most severe coolant leak you can expect, as such, you should repair it as soon as possible.

When a piston ring breaks a huge pressure starts building up in the oil pan. This pressure allows oil to enter the combustion chamber, which in turn burns with fuel causing a white/grey smoke or blue/white depending on the amount of oil.

Similar to before, the situation is two-fold. Not only is oil entering the combustion chamber, but fuel also drips into the oil pan. Once engine oil is contaminated with fuel its lubrication properties degrade abruptly, posing a serious risk to the crankshaft, camshaft, and all other moving parts.

A faulty engine valve seal will cause a leak, with similar consequences to a broken piston ring.

Engine oil will start dripping into the combustion chamber producing the white/blue/grey smoke from the exhaust, and fuel will reach the oil pan contaminating the entire engine oil.

A faulty valve seal won’t produce the white smoke symptom as fast as a broken piston ring or a crack in the engine block or cylinder head. However, the result will be the same.

Compared to all the mechanical issues described so far, this is arguably the less severe, nevertheless, you should get it fixed as it will get worse over time.

If your car has a diesel engine, white smoke from the exhaust could be caused by inappropriate injector pump timing.

On diesel engines, the fuel delivery timing is crucial, in many ways similar to spark timing on petrol engines. That’s why a bad injector pump timing could cause several issues, one of them, white/grey smoke from the exhaust.

How To Diagnose White Exhaust Smoke

If it’s not caused by condensation, then most cases of white smoke are related to mechanical issues. That why the first step in the diagnosis process should be establishing the severity of the problem.

Fortunately, this can be done with a quick visual inspection.

Test 1: Rule Out Condensation in the Exhaust System:

How To Fix White Smoke Coming From The Exhaust?

Unfortunately, most of the issues that cause white smoke coming out from the exhaust require a major repair.

Depending on the root problem you may need to: