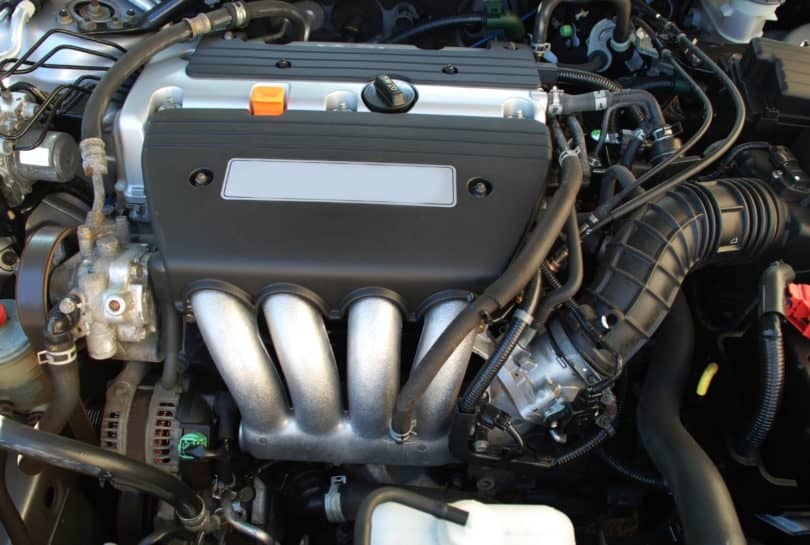 The Exhaust Gas Recirculation Valve (also known as the EGR) is a key component of the secondary emissions control system. A bad EGR valve can leave your engine running badly or not at all.

The primary role of the EGR valve is to reduce the nitrogen oxide (NOx) emissions by recirculating a portion of the exhaust gases back to the combustion chamber.

Over time, the EGR valve can become dirty and blocked with carbon deposits from the exhaust gases. This can eventually lead to the failure of the EGR valve.

Table Of Contents
6 Symptoms of a bad EGR valve
What Is An EGR Valve And What Does It Do?
How Does An EGR Valve Work?
How To Diagnose A Bad EGR Valve
How To Clean A Clogged or Dirty EGR Valve
EGR valve replacement cost

6 Symptoms of a bad EGR valve

The most common sign of a bad EGR valve, is an overall reduction in engine performance, especially when accelerating.

This is because a broken EGR valve will often fail or get stuck in the open or partially open position. This means that exhaust gases are not allowed back into the engine combustion chambers reducing efficiency when more power is needed.

The most common signs of a bad EGR valve include the following.

One of the possible signs the EGR valve has gone bad, is when it causes the check engine light to start flashing. If the ECU detects a problem with the emission control system (and the EGR), it may warn you by turning on the check engine or service engine soon light.

It's usually safe to keep driving with a broken EGR valve, but you should get it checked out as soon as possible.

An engine that keeps cutting out on startup can be one of the symptoms of an EGR valve stuck in the open position.

A failed EGR valve, stuck in the open position can make it difficult to start the engine and to keep it running.

Under normal circumstances, the EGR valve should be closed on engine startup, blocking the flow of gases back into the engine. It should stay like this until the engine warms up and the vehicle starts moving. 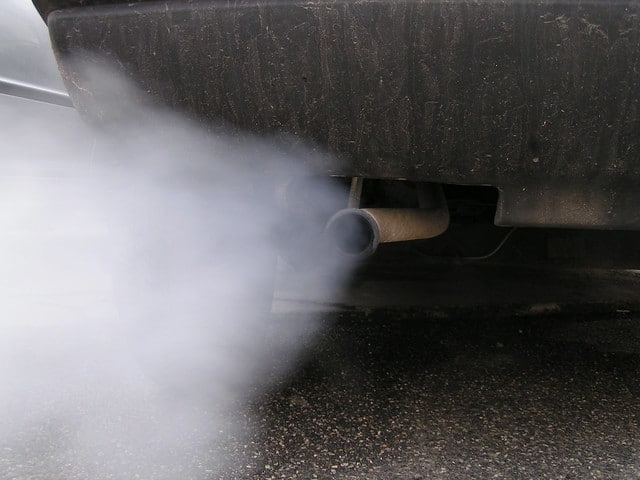 If the EGR valve is not operating properly and allowing exhaust fumes to pass into the combustion chambers, this can cause the engine to cut out, especially when the engine is cold. If on engine startup there is a strong smell of fuel coming from the exhaust, or the engine keeps cutting out, this may be caused by a faulty or partially blocked EGR valve.

Sometimes and EGR valve will not respond in a timely manner to the ECU and will stay open longer than it should, or open at the wrong time. This can cause a vacuum leak in the intake manifold that can cause an intermittent engine misfire.

These codes can point to leaks in any part of the air intake system, but removal and inspection of the EGR is a good place to start.

One of the most common symptoms of EGR valve failure is a rough engine idle, especially when the engine is cold.

EGR valves often fail in the open position, and this will allow exhaust gases to recirculate back into the engine when it's not desirable for them to do so.

One of the effects of a bad EGR valve is a decrease in engine performance, especially under heavy acceleration.

If the EGR valve is not responding to the ECU it can affect the power output of the engine. The EGR valve opens and closes in response to the real time conditions of the engine. If it stuck open this can have an adverse effect on the air to fuel ratio in the combustion chambers, resulting in a reduced power output.

It can also affect the performance of the turbo (if fitted). If the EGR is causing a vacuum leak, this can reduce the efficiency of the turbo, and can cause premature failure of the turbo if left un-repaired.

One of the symptoms of an EGR valve stuck in the closed position is spark knock.

Spark knock is a loud knocking noise that can be heard from the engine bay when the engine is accelerating or is under load.

Spark knock can be caused by problems with the EGR valve. If the EGR valve has become blocked or the valve is not opening when it should, this will stop the exhaust fumes from re-entering the engine when needed.

Spark knock can occur when the combustion chamber gets too hot or there is a build up of excessive pressure that causes the fuel to detonate instead of burning smoothly. 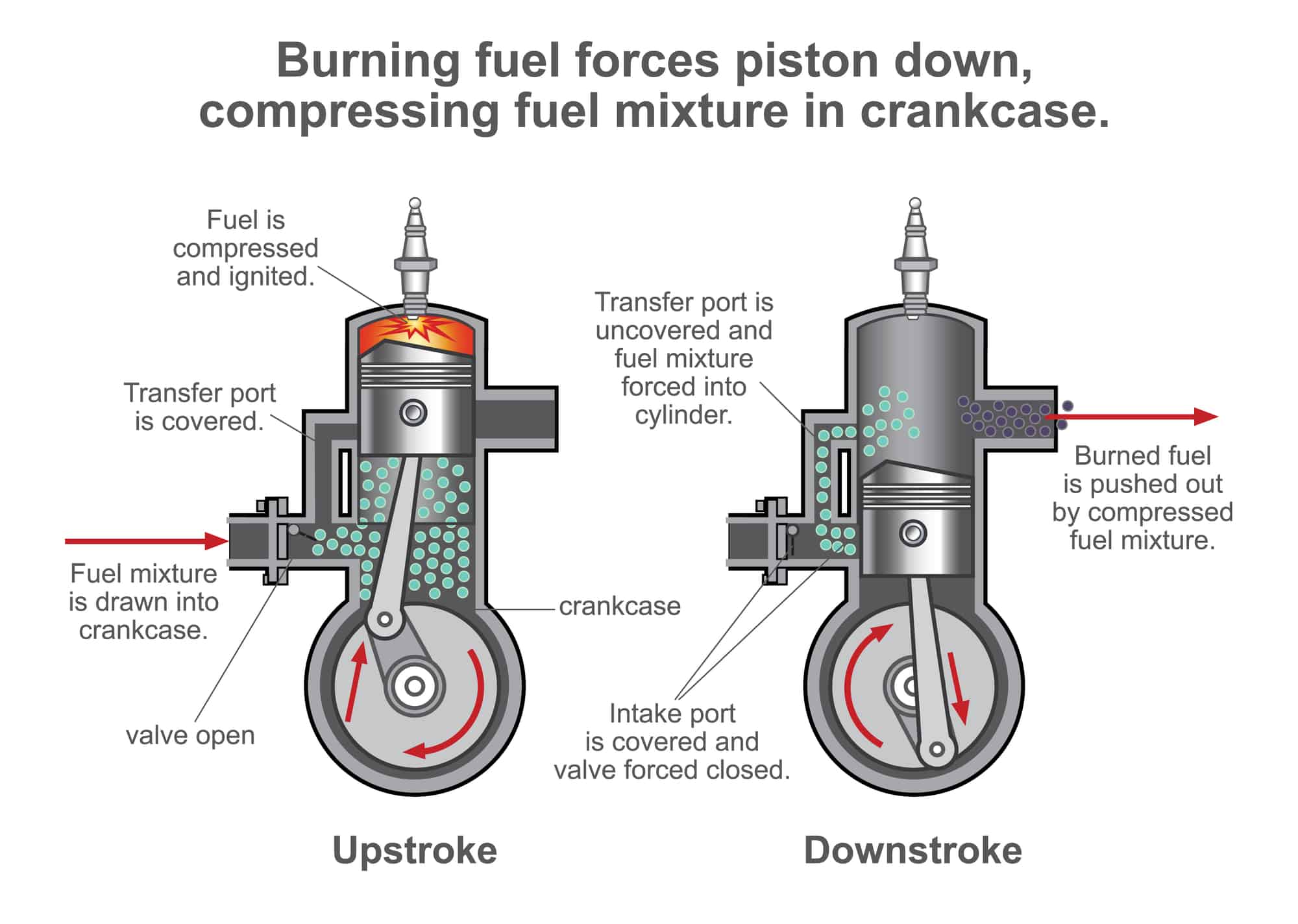 Spark knock occurs when fuel detonates rather than burning smoothly

Spark knock can lead to head gasket failure, damage to the piston rings, combustion chamber, the connecting rods and the pistons. Simply cleaning the EGR valve can help to prevent spark knock from occurring.

What Is An EGR Valve And What Does It Do?

The role of the EGR valve is to reduce emissions by using exhaust gases to reduce the temperature in the combustion chambers in the engine.

The EGR valve works by re-routing exhaust gases back into the engine at certain times, usually when the engine is not under excess load. 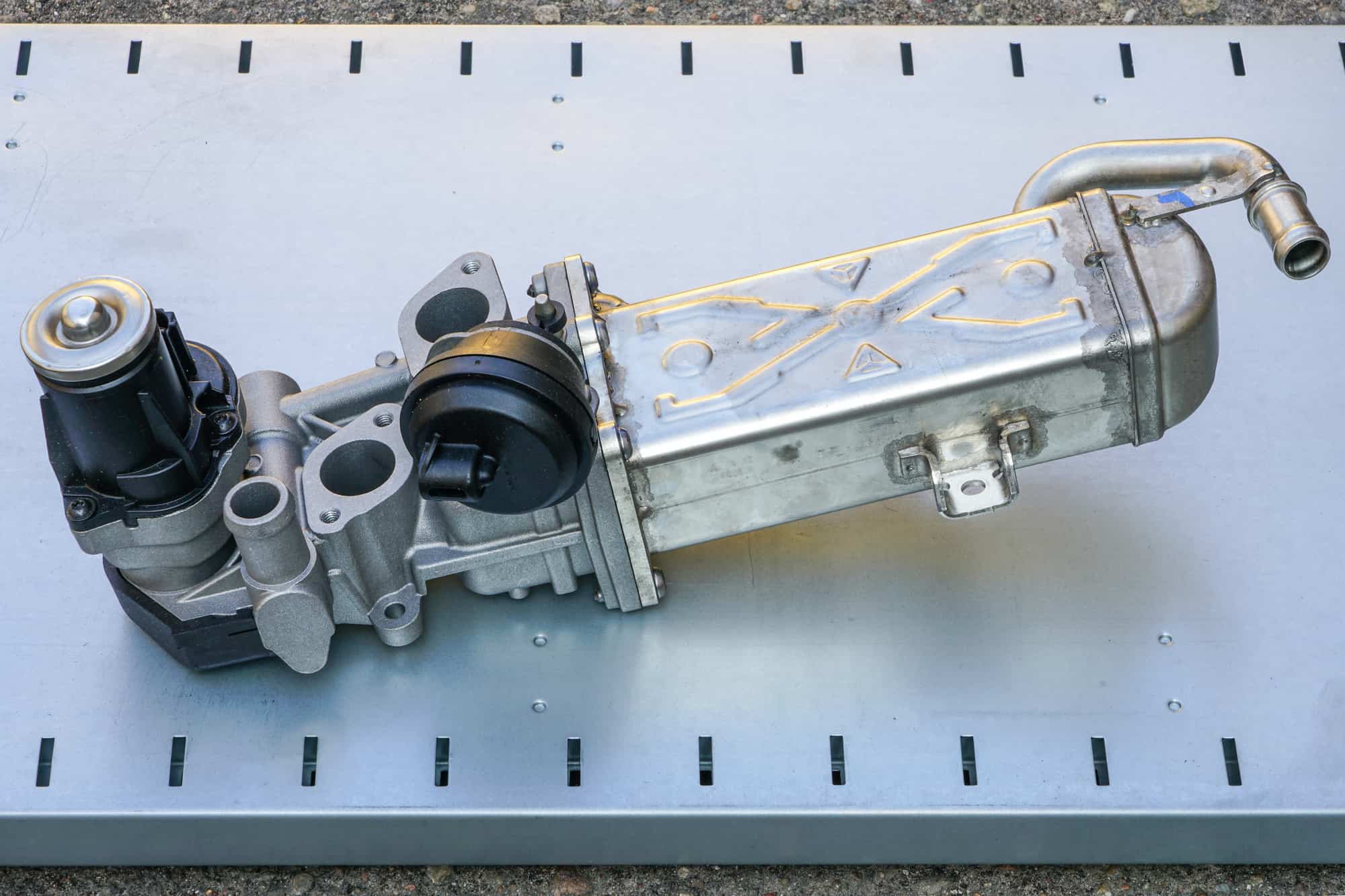 So does recirculating exhaust gases not harm the combustion process? The short answer is yes and no.

Overall engine efficiency will drop slightly, but the inert gases will not alter the air/fuel ratio because the engine control module controls the operation of the EGR and will adapt fuel delivery accordingly.

This drop in engine efficiency is offset by the reduction of dangerous nitrogen oxide gases from the exhaust, especially with diesel engines.

By recirculating a small portion of exhaust gases back into the engine, the combustion temperature can be reduced, under certain conditions and this will lead to a drop in nitrogen oxide emissions.

How Does An EGR Valve Work?

The EGR valve is usually installed on the intake manifold close enough to the exhaust in order to recirculate the gases when necessary.

Internally the construction of the exhaust recirculation valve is very simple. Some models use a flap design (similar to the throttle body), others use a linear valve design.

The EGR is constantly exposed to the exhaust gases which tend to create carbon deposits over time. A clogged EGR valve may get stuck, producing several problems depending on its final position (open or closed). That’s why is important to perform routine maintenance on the EGR valve to keep it in good condition.

How To Test A Bad EGR Valve

You may need one or more of the following tools:

> Vacuum line: on vacuum controlled EGR valves, disconnect the vacuum line and perform a visual inspection of its condition. Look for signs of worn or deterioration. 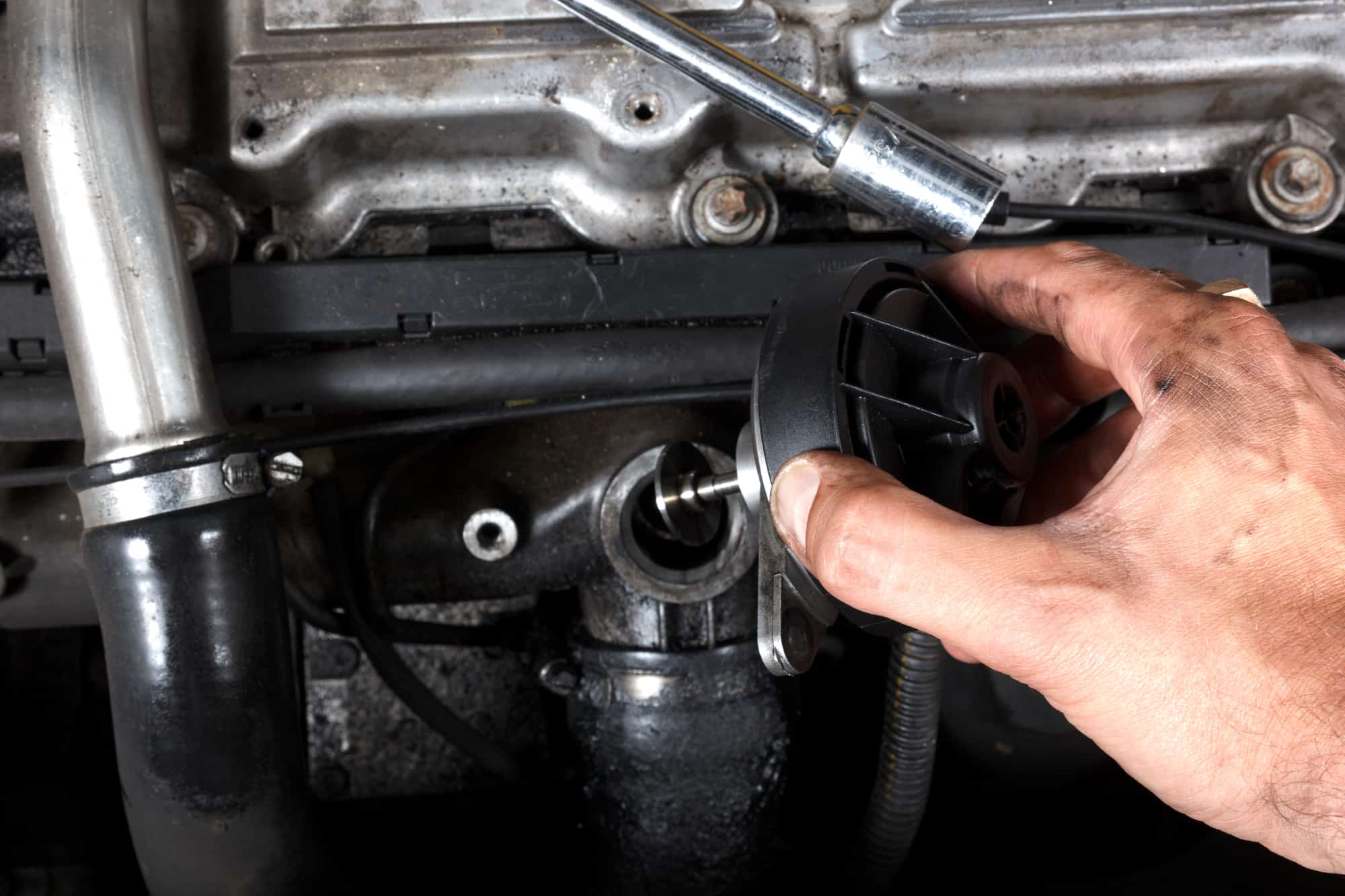 IMPORTANT: there are many different EGR implementations on the market. The following tests only apply to digital EGR models. It’s highly recommended to find a reliable information source containing the proper wiring diagrams before doing any electrical test.

> Reference voltage: as mentioned earlier in the article, some modern designs include a pintle position sensor. Internally, that sensor is nothing more than a linear potentiometer. Refer to the appropriate wiring diagram to identify your connector signals. In order to measure the reference voltage, you will need to enter in KOEO mode (Key On Engine Off) and turn the digital multimeter dial to “voltage” test mode. Unplug the EGR connector.

Now place one multimeter lead in a known ground (battery negative is a good one) and the other probe tip in the terminal of the EGR wiring harness corresponding to the ECU reference. If there is no voltage (or is below 4V) then you must check the continuity and electrical resistance of the wire from the terminal all the way to the ECU itself.

> Ground test: this test assumes that you found a good reference voltage coming from the ECU. Once again, enter in KOEO mode (Key On Engine Off) turn the digital multimeter dial to “voltage” test mode and place one probe tip on the EGR harness terminal corresponding to the reference voltage and the other on the terminal that should be the ground.

Ideally, the voltage would be the same value as the previous test. If the difference is greater than 10%, then you will need to check electrical resistance and continuity of the ground line from the EGR harness all the way down to the ECU.

> Exhaust Gas Recirculation Valve live test: depending on the vehicle year and model, using an automotive diagnostic scanner you can perform a EGR “live test”. First, enter in KOEO mode and lock the EGR related data on the display. Depending on your vehicle and scan tool maker you may have several items to check. Focus on the EGR position voltage output, EGR aperture (often expressed as %), EGR solenoid activation, and RPM.

Once you are ready, start the engine to enter KOER mode. Accelerate and deaccelerate the engine. Watch the EGR data carefully. The aperture should change depending on RPM, usually, the valve is closed at idle and opens while accelerating.

How To Clean A Clogged or Dirty EGR Valve

Due to its working conditions, it’s not uncommon to find the EGR valve clogged with carbon deposits. It can be difficult to prevent the build up, especially when engines get older and have higher mileage.

There are a couple of different solutions to the problem, depending on the severity of the blockage.

This article will assume you will choose the easier alternative: using a professional EGR valve cleaner.

> Preliminary steps: warm-up the engine until it reaches its normal operating temperature.

> Remove air filter or air intake hose: depending on your engine you will need to choose a method to access the air intake system. You will need to spray the product on the air intake. Usually, its easier to remove the air hose, but be aware that you can’t bypass the MAF sensor or vehicle will be unable to work properly.

> Spray the EGR cleaner into the air stream: increase the engine revolutions to approximately 2000 RPM (consult your product for exact instructions). Then spray the product in short bursts, usually one second each. The RPM will drop momentarily.

That’s normal, wait a few seconds allowing the engine to burn the cleaner. Repeat the procedure until the bottle is empty. Maintain the 2000 RPM at all times, increase them if necessary to avoid stalling. Keep the engine running during 3-5 minutes before shutting it off. Ideally, you should perform a test drive, don’t exceed 3000 RPM though.

If the spray cleaner doesn’t improve the EGR performance you may need to service the valve. As explained above that implies removing the EGR from the engine and clean it using a carburetor cleaner. A highly clogged valve will not be recovered even using this kind of products. If that’s the case you will need to replace it.

The cost can vary greatly, depending on the model and age of the vehicle, and the type of EGR valve that is fitted.

Replacing the EGR valve at home yourself is not a difficult job, and can save you a lot of money, especially if you fit a refurbished EGR valve.