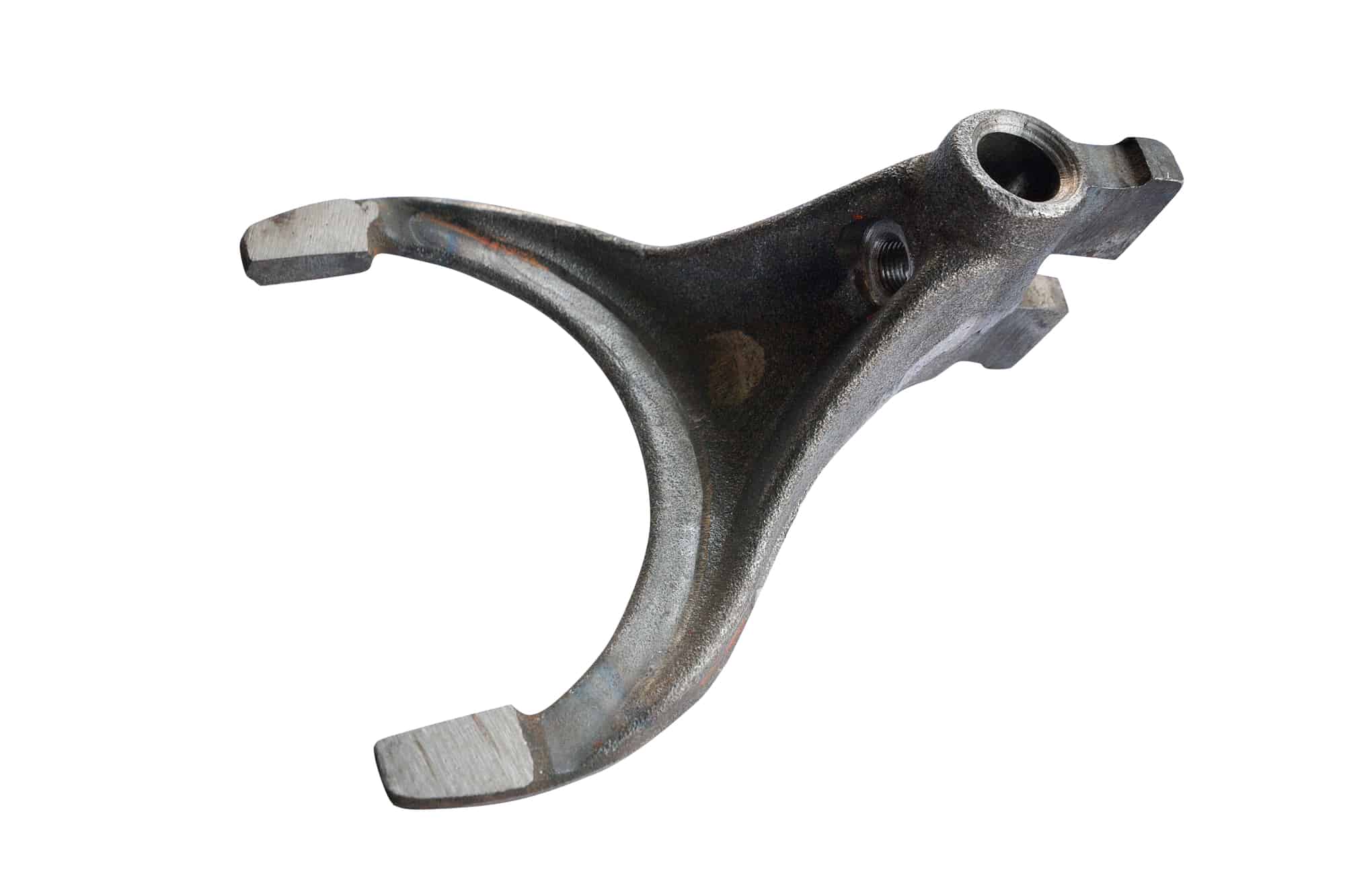 The clutch fork is responsible for moving the throw-out bearing when you push down on the clutch pedal. A bad clutch fork will cause problems with the operation of the clutch.

As a general rule, the symptoms of a bad clutch fork include trouble changing gears, noises from the clutch when the pedal is pressed, a burning clutch and a heavy or stiff clutch pedal. A bad clutch fork will cause premature clutch plate wear, and should be replaced during a clutch replacement.

The clutch fork is designed to operate under extreme pressures often in excess of 1500 lbs. They are usually made from hardened steel that can resist high temperatures and pressures, but over time they can weaken and sometimes crack or bend.

It’s best practice to replace the clutch fork during a routine clutch plate replacement, especially if it’s a high mileage vehicle. Even if the clutch fork has not failed, it can start to wear, especially at the point where the fork pushes against the throw out bearing.

Here are the symptoms of a bad clutch fork.

The most common sign of a bad clutch fork is trouble changing gears. The clutch fork is an essential component in the gear change mechanism. Its job is to push the throw out bearing against the pressure plate to release the clutch plate so that a new gear can be selected.

The symptoms of a burnt clutch include a foul burning smell (especially when changing gears), erratic engine acceleration, difficulty changing gear and a stiff clutch pedal. If the clutch fork is not repaired then this will lead to clutch failure fairly quickly. A burnt clutch plate can also cause damage to the flywheel and the pressure plate.

The clutch fork is attached to the throw out (release) bearing at one end and the slave cylinder at its other end. Most modern cars use a hydraulic clutch system, where fluid is pumped under pressure by a master cylinder to a slave cylinder. This fluid pressure forces the clutch fork to move forwards on a pivot, moving the release bearing with it.

The ‘feel’ of the clutch pedal will change if the clutch fork is loose or bent. It may feel stiffer if it no longer has the same range of movement, or it may feel lighter if it has become loose or has disengaged from the release bearing.

Symptom 4: Vibrating Clutch Pedal or Noises From The Clutch

Damage to the clutch fork can also lead to damage to the rest of the clutch assembly. If the pressure plate is no longer held under sufficient pressure, this can lead to a slipping clutch that can burn the clutch plate and warp the flywheel. A warped flywheel will create even more vibrations, further compounding the problem.

If the clutch fork has become completely disengaged from the slave cylinder or the throw out bearing, this can cause the clutch pedal to become overly soft and it may even drop to the floor.

A bad clutch fork can put extra pressure on the clutch cable, causing it to snap and this can also cause the clutch pedal to drop to the floor, losing all resistance.

1. What Does A Clutch Fork Do?

Pressing on the clutch pedal pushes the clutch fork against the throw-out bearing that in turn pulls the diaphragm spring fins backward so that the pressure plate moves away from the clutch plate. This allows the gear change to take place before the pressure plate is released and the power from the engine can once again be transferred to the transmission and onto the wheels.

If the clutch fork is not operating smoothly, or has broken completely, then gear changes are either going to be difficult or not possible at all.

2. How much does it cost to get a clutch fork replaced?

A clutch fork replacement can cost in the range of $400 to $700. The clutch fork itself can cost as little as $30, but the majority of the cost is associated with the labor involved in replacing the fork.

If the entire clutch assembly is being replaced, this can increase the cost to over $1000.

3. What causes a clutch fork to break?

A clutch fork can break if it is put under more pressure than it is designed to handle. One of the most common reasons for this to happen is if some other part of the clutch assembly becomes damaged that leads to excessive vibrations of stiffness especially when the clutch is in use. Common reasons for a broken clutch fork include a bad throw out bearing, an overly stiff pressure plate and a warped flywheel.

Sometimes a broken clutch fork can be caused by a defect in the clutch fork from when it was manufactured. This could be something like a hairline crack or an issue with the quality of the materials used in the manufacturing process. A manufacturing defect may go unnoticed during installation, but it could get worse over time and eventually lead to failure.

In some cases a broken clutch fork can occur if it is not installed properly. Installation issues such as an overly tensioned clutch mechanism can put too much pressure on the clutch fork, causing premature failure.