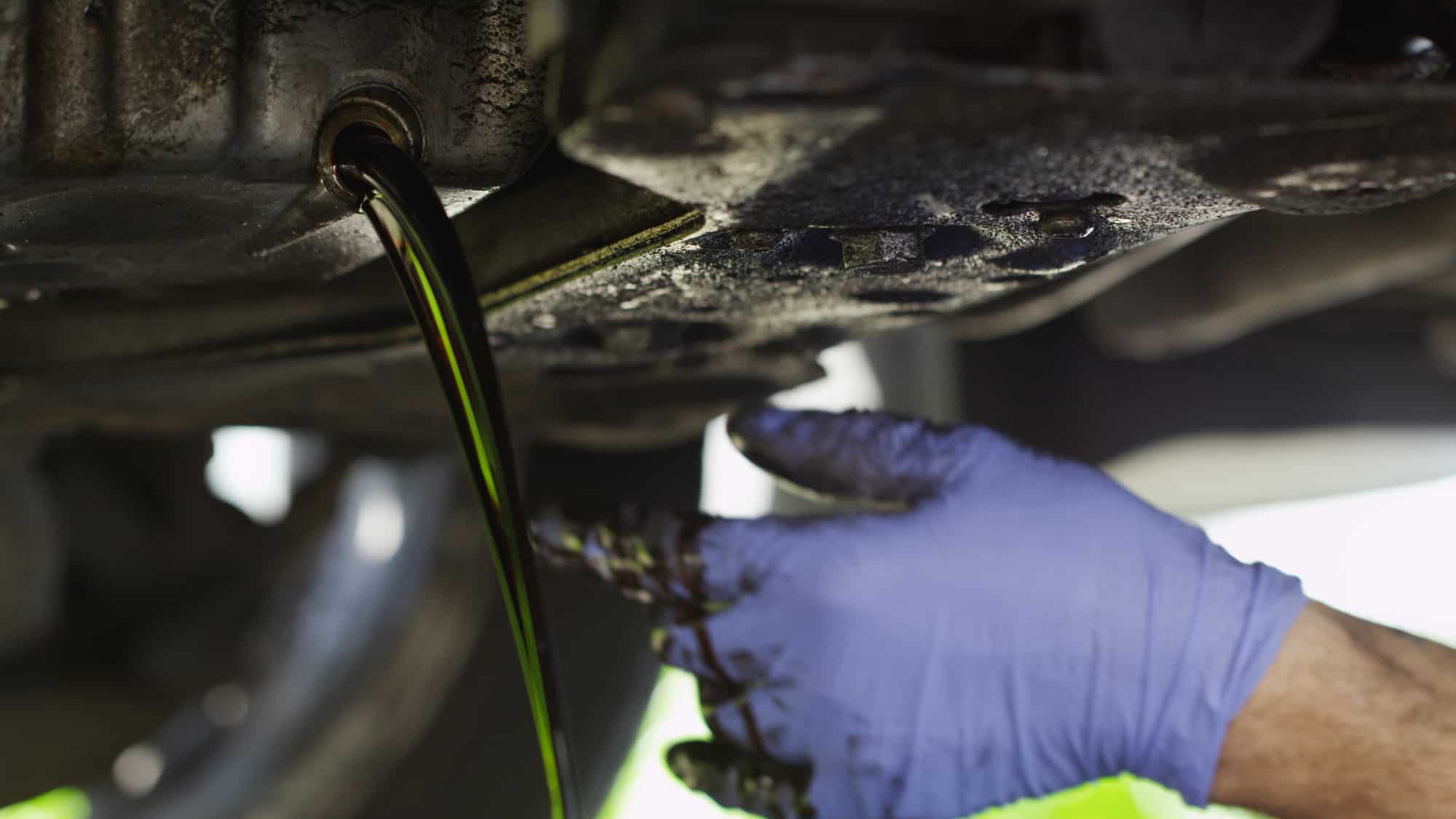 Low oil pressure in your car’s engine can be caused by an oil leak, a blocked oil filter, using the wrong viscosity oil, or a faulty oil pump.

Whatever the cause, you shouldn’t drive your car far if the low oil pressure light is on. Oil is essential for keeping the engine lubricated and a lack of oil will cause irreversible damage and can cause components like turbos to fail very quickly.

Here are the top causes of low oil pressure in most engines.

The first factor that could cause an improper pressure is low engine oil level. As simple as it is, many seasoned mechanics overlook oil level as the possible cause of a low-pressure problem. The engine oil level can go down due to many reasons:

Engine oil is subject to several conditions that degrade its properties over time. Some of these conditions are:

The contamination/degradation process is inevitable due to the oil working environment. That’s why paying attention to the suggested oil change interval is important.

Typically, fully synthetic oil service intervals range between 7,500 to 10,000 miles depending on vehicle usage, brand, and engine design. The more you wait between changes the more likely your engine will suffer the consequences of degraded engine oil:

Arguably, the most dangerous consequence of all is the last one, higher viscosity which is discussed in detail in the next section.

Engine oil has many properties, but one of the most relevant is its viscosity.

Oil viscosity is so important that is used as one key parameter during engine design. In particular, engine cavities and conduits are designed with a specific oil viscosity range in mind.

You may wonder how viscosity affects oil pressure and what it has to do with engine design.

Let’s assume that your engine owner’s manual recommends using 5W-20 synthetic oil. That’s a low viscosity oil, which means engineers most probably designed oil galleries with a tiny diameter. If you ignore the oil specifications and use a 15W-40 instead of 5W-20 then you will be using a thicker oil that presumably won’t flow through oil passages or if it does, will do it at a slower rate than the 5W-20.

The outcome of such exercise could be massive damage to the engine due to lack of proper lubrication, especially on the upper section (camshaft, pushrods, tappets, rocker shaft, etc).

So we can assume that using a thicker engine oil is not a good idea, but what about a thinner one?

Let’s imagine the contrary, a vehicle that suggests using 15W-40 and you use a 5W-20 engine oil instead. Oil flow won’t be a problem in that case. However, since 5W-20 oil is not prepared for the higher engine and/or weather temperatures, it will break down.

When oil breaks down loses its lubricant properties, meaning that your engine parts will be exposed to metal-on-metal contact.

The result, a broken engine.

So as we can see, using the wrong engine oil viscosity is not advisable. This also applies to dirty or degraded oil, as mentioned in the prior section. A degraded oil changes its viscosity and thus could potentially cause the same level of damage.

Engine oil filters are designed to capture contaminants, metal debris, dirt, and any other harmful element from flowing through the lubrication system.

Its role is crucial, since they stop the engine oil becoming saturated with such particles that otherwise would cause wear in moving parts.

Like any other filter, the engine oil filter is designed with a finite lifespan. Depending on the brand and engine oil type, you can expect a typical oil filter to last from 3,000 to 20,000 miles.

The golden rule regarding the oil filter is to match it to your car manufacturer specifications. For example, if the car owner’s manual suggests using 5W-40 synthetic engine oil and replace it every 5,000 miles then you should change the oil filter with each service.

Changing the oil filter regularly is the only way of preventing it from clogging, and that’s exactly what should be avoided. A clogged oil filter will have a direct impact on engine oil pressure.

A restrictive oil filter will significantly lower the oil pressure and hence will pose a threat to engine moving parts. But that isn’t the only threat. Internally oil filters have a security device called a “relief valve”.

When the oil filter pressure reaches a certain value the relief valve opens and allows oil to flow through the engine, to help prevent damage. The oil is now bypassing the filtering element, which means it can quickly become highly contaminated and not work as it should.

Another factor affecting motor oil pressure is internal engine wear. As time passes, critical engine parts will wear down. The most frequent example on high-mileage engines is worn engine bearings.

Excessive wear on the crankshaft, crankshaft bearings, and rod bearings will decrease the overall oil pressure. That’s something to be expected because oil restriction when flowing through these orifices will be almost inexistent.

An engine suffering from low oil pressure due to its internal wear is clearly approaching its end of life. There is little to do in this regard besides a partial or a complete engine rebuild.

At the heart of the lubrication system is the oil pump.

This one component is responsible for delivering the engine’s oil pressure.

From a design standpoint, oil pumps should last the entire engine life of the engine. However, they can fail before that depending on vehicle maintenance and usage.

If the oil changes intervals were too prolonged, the oil level was kept too low for extended periods of time, or the vehicle was used in demanding assignments such as towing, police work, ambulance, and similar jobs, then the oil pump may fail prematurely.

Some symptoms that may indicate a faulty oil pump are the following:

Last but not least, the entire situation of low oil pressure could be a false positive.

Depending on the year and maker of your car this sensor could as simple as an electrical switch that sends to the Electronic Control Unit (ECU) a signal indicating low oil pressure or could be a more fully-featured pressure sensor.

The best strategy to discard a possible sensor problem is to use an automotive (OBD) scanner to perform a quick check.

Here are the steps to check for a faulty or failing oil pressure sensor using an OBD scanner:

Why is Engine Oil Pressure Important?

At the most basic level, engine oil is responsible for reducing the friction between engine parts that are in motion.

However, that isn’t its only purpose.

Engine oil also helps the cooling system by absorbing heat that later is dissipated in the oil pan and/or engine oil radiator.

Engine oil sealing and cleaning properties are fundamental to protect all internal parts from excessive wear as well as enhancing fuel efficiency. In a nutshell, we can summarize the importance of motor oil as follows:

In order to fulfill the above, motor oil needs an adequate flowing rate through the different engine parts, which is only possible with proper car engine oil pressure.