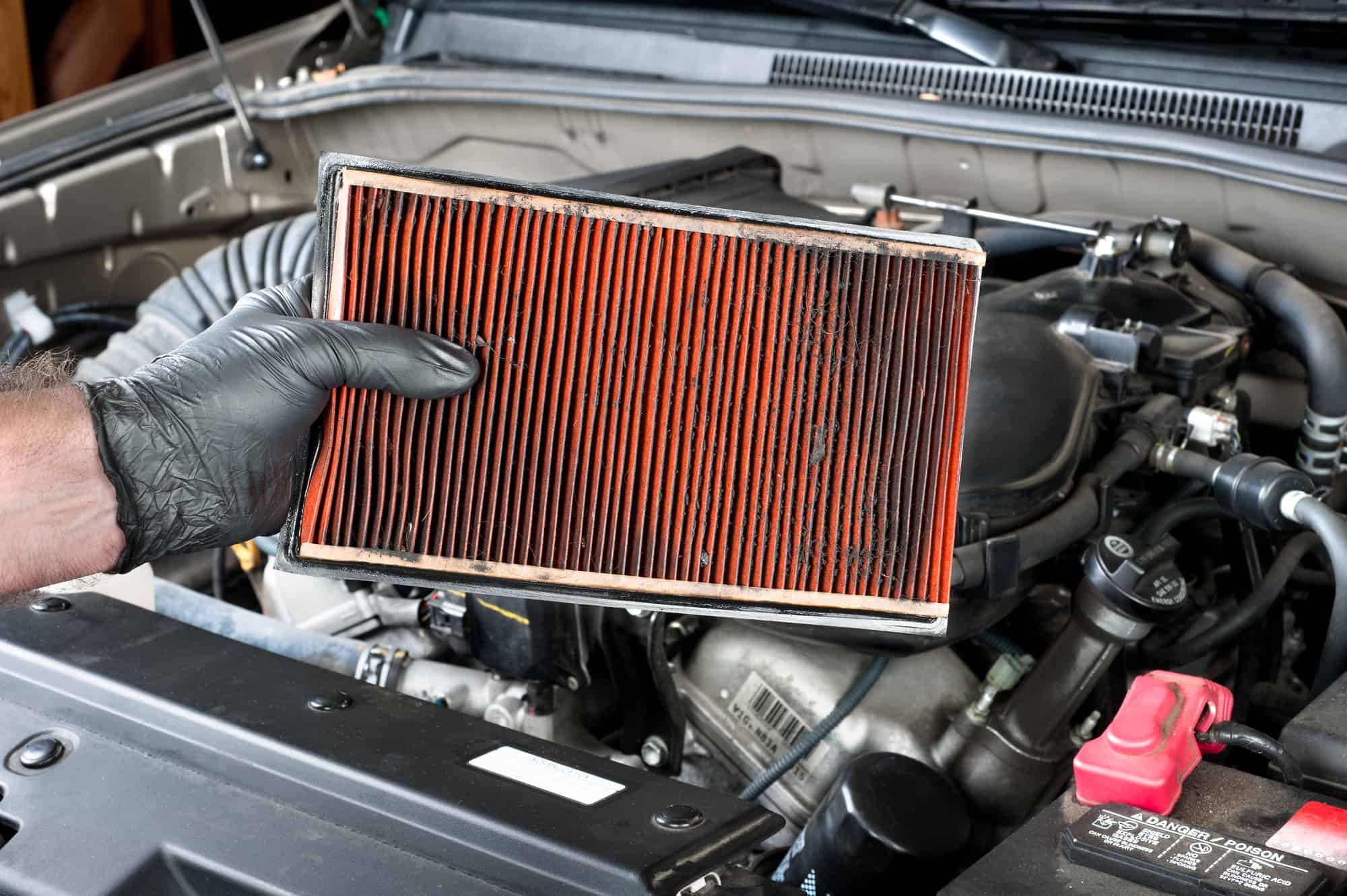 If you’re experiencing engine problems with your car, then it’s always worth checking the condition of the air filter. All of the air that is entering your cars’ engine, comes in through the air filter. If it’s really dirty then this is going to impact how well the engine can run.

The symptoms of a bad air filter include a reduction in engine power, slow acceleration, sometimes a reduction in fuel economy, a delay in gear shifts and even a difficult to start engine.

The air filter is subjected to all of the pollution and debris that you may encounter when you are driving. Depending on where you live, it can become dirty pretty quickly, and this will affect your engine if you don’t change it regularly.

In this article I’ll run through the symptoms of a bad air filter, and explain how to check and replace it if necessary.

What are the symptoms of a bad or dirty air filter?

The air filter is fitted to the engine to block any dirt and debris from being sucked into the intake manifold and possibly causing it to become blocked. It must also be permeable enough to allow in a huge amount of air that is needed to operate the engine, especially when accelerating. This is called the separation efficiency of the air filter and it is usually around 99%, meaning it only lets in 1% or less of the contaminants in the air.

Because of its position in the engine, the air filter will get struck by all sorts of dirt, bugs, leaves and debris from the road. If you drive in particularly harsh conditions where there is a lot of dust, then the air filter can get clogged up pretty quickly.

The amount of air that the air filter lets into the manifold per minute is very important. This is called the flow rate and it is measured in m3 per minute. As the air filter ages, its flow rate will drop due to the permeable material in its core becoming blocked with dirt.

When an air filter gets very dirty, you are going to experience some symptoms such as:

A common sign of a dirty, clogged up air filter is a decrease in engine power. This is because the engine cannot get enough air to keep the air to fuel ratio intact.

When you press down on the accelerator, the throttle position sensor monitors the aperture of the throttle body. The more the throttle opens, the more air is sucked in to the manifold. If the air filter is blocked, there will be less air getting in than expected by the ECU.

Less air means less combustion, which means less power. In modern engines, the engine control module will adjust the fuel output to match the air input values it receives from the MAF and MAP sensors. If you’ve got an older engine with a carburettor, then a dirty air filter will cause problems with the air/fuel mix and will result in a rough engine idle and poor running performance.

A decrease in fuel economy is really only going to be a problem if you drive an older vehicle that has a carburetor, rather than direct fuel injection. This is because the air to fuel ratio can usually be adjusted sufficiently by the engine control unit. It does this by using the airflow and air pressure values it receives from the MAF and MAP sensors.

3. A delay when shifting gears

A reduction in power output is going to affect the timing and the smoothness of gear changes, especially when you are trying to accelerate up through the gears. If you notice a hesitation in the transmission, or the transmission lingering in a gear longer than normal, the cause could in fact be a clogged up air filter (and not low transmission fluid or some other fault with the transmission.)

4. A delay when accelerating

When you put your foot down hard on the accelerator the engine needs a huge increase in air flow to keep up with the increase in the amount of fuel it is burning. If the air filter is blocking air flow, then its going to take longer for the engine to get the amount of air that it needs. This will usually result in a delay in acceleration, and a decrease in power as explained above.

If you’ve got a turbocharged engine, and especially if it is a diesel engine, then you will likely experience a greater delay in acceleration than in a petrol engine. This is because turbocharged engines squeeze more air at a greater pressure into the engine cylinders to achieve more power output. If it’s a diesel engine, then a turbocharger is necessary because diesel has a lower power output when ignited compared to petrol. If the air flow is decreased, then the turbo will be deprived of air and this will affect the performance of the engine.

A severely blocked air filter can trigger a check engine light on the dashboard. This is usually caused by one or more cylinder misfires as the engine control module struggles to adapt the fuel delivery to match the low air flow.

A severe reduction in air flow can also trigger mass air flow and mass absolute pressure sensor errors. These sensors are calibrated to deliver signals within predefined ranges. An out of range air flow reading will usually trigger an engine management light to let you know that something is wrong with the sensor or in some cases the air filter element.

If you drive your vehicle for an extended period of time with a dirty air filter, this can have an adverse affect on the fuel injectors. Unburnt fuel damage the injector tips, causing a problem with fuel delivery. Unburnt fuel can also make its way through to the exhaust, causing problems with the catalytic converter and the oxygen sensors.

6. engine is more difficult to start and stalls sometimes

An engine that is starved of air can be more difficult to start, especially in cold conditions. A cold engine will usually run a bit rich to begin with because the fuel behaves differently when cold. Cold fuel is less likely to ‘atomise’ and acts more like a thick liquid, rather than a mist. This makes it less combustable than when it is warm. Cold air is more dense and contains more oxygen, and therefore you need more fuel to keep the air/fuel ratio intact.

If there is a lack of cold air, this can further exasperate the cold fuel problem, making it more difficult to keep the engine going or to start it in the first place. Most engine management modules will be able to compensate for this to a certain extent, but if the air flow is severely hampered then it may prevent the engine from starting.

How much does it cost to replace a bad air filter?

You can expect to pay between $10 and $30 for a good quality air filter.

​They are usually very easy to replace and even if you have never serviced your car before, you should be able to replace the air filter. If you leave the job for a mechanic you can expect to pay $80 to $100, depending on the make and model of the vehicle. On some cars you need to remove a few plastic covers to get to the air filter and this can increase the labor costs.

The air filter is usually one of the cheapest service items you can buy. It is important to buy a good quality one. I usually recommend buying one from a dealer or from an OEM stockist. Cheap air filters can fail quicker than OE filters because of cheaper materials or bad fitment. Some cheap filters also either let in too much air or too little air and this can affect the engine performance and efficiency.

If you want to ‘upgrade’ the air filter to a performance air filter then you can expect to pay anywhere from $50 to $100 for a compatible replacement.

What happens if you don’t replace a bad air filter?

You should probably replace the air filter every 15,000 to 20,000 miles or every two years. It really depends on the driving conditions, where you live and the type of engine that is in your vehicle.

If you neglect he air filter, it will affect the performance of the engine over time. Under normal conditions, it’s unlikely that a dirty air filter will leave you stranded on the side of the road. Modern engine control modules have the ability to compensate for lack or air or fuel to a certain extent.

It’s also unlikely to cause any permanent engine damage, as long as it is filtering (or blocking the air), and not letting any dirt through to the MAF or intake manifold.

It is a good idea to regularly check the condition of the air filter, and to remove it and clean out the air filter housing and pipe work to make sure it doesn’t get blocked up with leaves or dirt. A clean air filter will help to extend the life of the mass air flow sensor and will generally keep the engine running more efficiently.

How do you change a bad air filter?

Most air filters are easy to change. They are generally located at the top of the engine or to the side and they are housed in an air filter box. Check out our guide to car servicing where I outline how to change an air filter.

Most air filters are located in an air filter box that is connected directly to the mass air filter sensor and intake manifold. You should check your service manual to see exactly where the air filter is located and the steps for replacement. Most newer vehicles have air filters that are easy to access and change, in some cases you can remove the air filter without any tools.