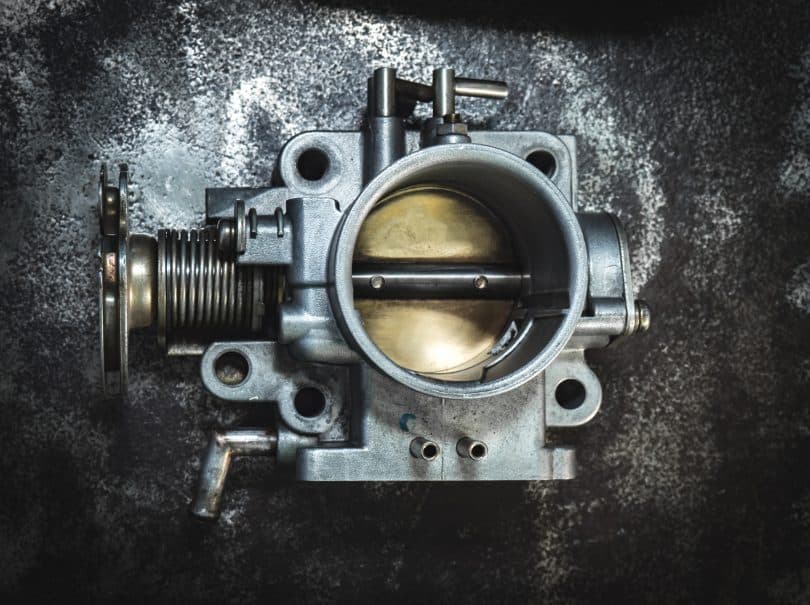 The symptoms of a bad throttle position sensor include: poor fuel economy, lack of engine power, a rough engine when idling, lack of power when accelerating and engine misfires.

As the throttle position sensor reports the throttle aperture to the Electronic Controller Unit (ECU), the TPS information is vital not only for the fuel delivery control but also for the automatic transmission.

This sensor should not be confused with the Accelerator Pedal Position Sensor (APP sensor), they have a similar goal but are not used for the same purpose.

The data that a throttle position sensor (TPS) reports back to the ECU is vital for fuel delivery control as well as automatic transmission shift controller. If there is a problem with the TPS, then you are going to experience problems with how the engine performs.

The most common symptoms of a bad throttle position sensor are centred around a lack of power, especially when accelerating along with poor fuel economy. This is because the ECU does not know exactly how hard you are pressing on the accelerator if the TPS readings are not accurate.

Here are some of the most common signs of a bad throttle position sensor.

what does a throttle position sensor do?

Using this information, the ECU can calculate how much fuel is necessary to match the amount of air entering the engine and adjust the fuel output from the injectors accordingly.

How Does A Throttle Position Sensor Work?

The vast majority of throttle position sensors share a 3-wire design. However, depending on your vehicle manufacturer, you may have a 4-wire and even in rare cases, a 5-wire TP sensor. 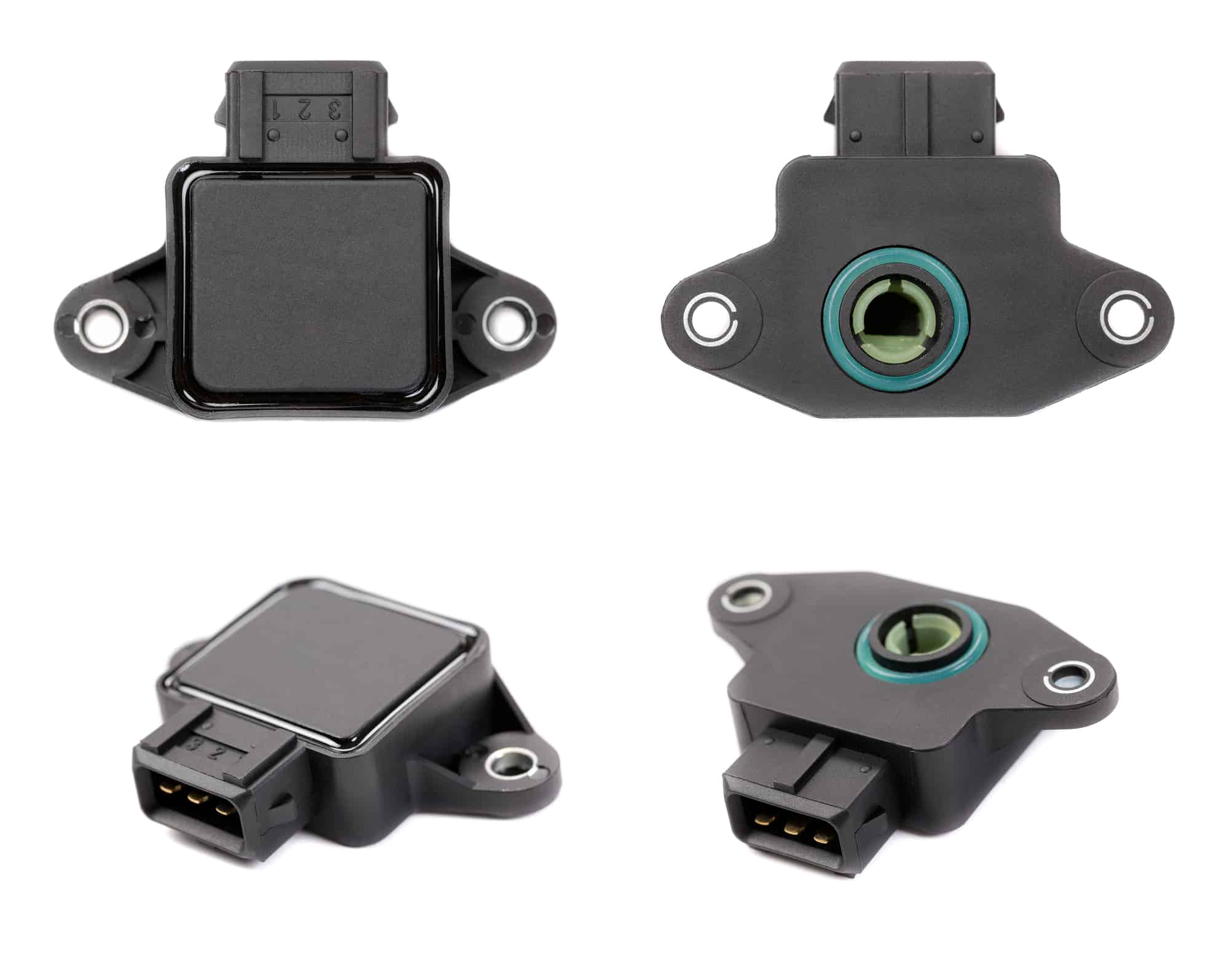 Internally, all TP sensors use a potentiometer that measures the throttle flap position. Potentiometers are by definition a special kind of variable resistor composed of a resistive material and a rotating contact (often called “wiper”). Because of its electrical design, throttle position sensors need at least 3 wires: one for the reference voltage, one for the returning voltage and one for the ground.

Every time you turn the ignition on, the ECU sends a 5V reference voltage to all its analog sensors.

In the case of TPS, the reference voltage is received by one of its terminals, passed through the potentiometer resistive material, and then goes out by another terminal back to the ECU.

The third terminal (ground) completes the electrical circuit. The electronic control unit use the returning signal from the sensor to determine the actual throttle position, usually calculated in the form of aperture percentage or angle.

How much does it cost to replace a bad throttle position sensor?

You can expect to pay anywhere from $30 to $60 dollars to buy a new throttle position sensor for your car or truck.

If you are planning on replacing it yourself then this is a fairly cheap fix. Of course, you are going to have to have the right tools for the job and a good quality diagnostic code reader is a must.

If you are going to leave it to a mechanic to repair then you can expect to pay $300-$500. This is because there can be a large amount of labor involved in accessing and replacing the sensor.

How Do You Diagnose A Bad Throttle Position Sensor?

The throttle position sensor is one of the easiest components to diagnose. You will only need the following tools:

A professional grade automotive scanner with live data graphing capabilities is not essential for testing the TP sensor, but certainly would speed up the process no matter what kind of sensor is installed.

IMPORTANT: The following tests assume that the TP sensor harness is already unplugged, refer to “how to replace” section if you have any doubt.

> Sensor continuity: turn the digital multimeter dial to “continuity” test mode. Now use the multimeter probes to measure the continuity between the sensor terminals located at each end. You should hear the distinctive “beep” in your DMM indicating good continuity. Now place one probe in the center terminal of the sensor and the other in one of the farthest sensor terminals. Again, you should have good continuity. Repeat the procedure keeping the center probe in place and touching the remaining terminal with the other, one more time you should have continuity. An open circuit during this test would be an indication of a bad throttle position sensor.

> Reference voltage: the prior tests were conducted with the ignition key off, directly on the TPS. In order to measure the reference voltage, you will need to enter in KOEO mode (Key On Engine Off) and turn the digital multimeter dial to “voltage” test mode. Now place one multimeter probe in a known ground (battery negative is a good one) and the other probe tip in one of the farthest terminals of the TP sensor wiring harness. If there is no voltage then keep the ground probe and touch the opposite terminal on the sensor harness. One of the outer terminals should read near 5V. That’s the nominal reference voltage coming directly from the ECU. If neither terminal shows voltage (or is below 4V) then you must check the wire continuity and resistance starting from each terminal all the way to the ECU. On the other hand, if you do find a terminal receiving 4.5V or more, mark it as the VREF wire.

> Ground test: this test assumes that you found a good reference voltage coming from the ECU. Once again, enter in KOEO mode (Key On Engine Off) turn the digital multimeter dial to “voltage” test mode and place one probe tip on each of the farthest harness terminals. You should read the same (or about the same) voltage than the previous test. A difference greater than 10% may indicate a poor ground. If that’s the case, you must check the electrical resistance from the harness terminal all the way down to the ECU.

> Sensor internal wear: this test requires using an analog multimeter instead of a digital one. Place one multitester probe tip in the center terminal of the TP sensor and the other in the corresponding “reference voltage” terminal on the sensor. Slowly open the throttle flap while watching the VOM pointer (needle) moving. The expected behavior is a needle that moves steadily clockwise. If during the test the multimeter pointer stops (while still opening the throttle flap) or it drops counter-clockwise then you have a bad throttle position sensor  and should be replaced.

> Throttle Position Sensor live test: using an automotive diagnostic scanner you can perform a TPS health test similar to the “sensor internal wear” test. Connect your scan tool and enter in KOEO mode (Key On Engine Off). Select live data and lock the TP sensor on screen. If your scanner has live data graphing ability use it. Press the accelerator pedal very slowly while looking at the scanner display. You should see a straight line with a positive slope on the screen as you press the pedal. Any abrupt change in the line during the test is an indication of a bad throttle position sensor. On some vehicle models, you may see a negative slope line. The test principle is the same, any sudden change in the slope is enough to replace the sensor.

> Idle Switch / WOT Switch: as mentioned earlier some TP sensor designs use 4 or more wires. The additional wires are there for the idle and/or wide open throttle switches. Using you automotive scanner you can easily check their status. Enter in KOEO mode (Key On Engine Off) and select live data on your scanner. Look for the idle switch and WOT switch. Sometimes they are simply named “Idle” or “wot” followed by its status “ON / OFF”. Once you find them check that the idle switch is working changing from “ON” to “OFF” when you press the pedal. Similarly, test the WOT switch pressing the pedal until it reads “ON”. If either of the switches is not working as expected, you must check the OEM literature and find out if they can be calibrated. Follow OEM instructions as necessary. Replace the TP sensor in case no manual calibration is available. Please notice that many 3-wire TP sensors show the idle and WOT parameters in the scanner live data. That’s because the ECU is simulating the switching behavior of a 4-wire design. Always refer to OEM literature when in doubt about a possible TP sensor calibration.

How Do You Replace A Bad Throttle Position Sensor?

The TP sensor is usually located in the throttle body as an independent sensor, but depending on the engine design, sometimes the TPS may be part of the Electronic Throttle Control (ETC).  This section will assume the first scenario, an independent TP sensor.

When a throttle position sensor goes bad it can produce symptoms such as poor fuel economy, lack of engine power, a rough engine when idling, lack of power when accelerating and random engine misfires.

It can cost anywhere from $30 to $500 to replace a faulty throttle position sensor, depending on the vehicle and whether you get a mechanic to do the job or you do it yourself.