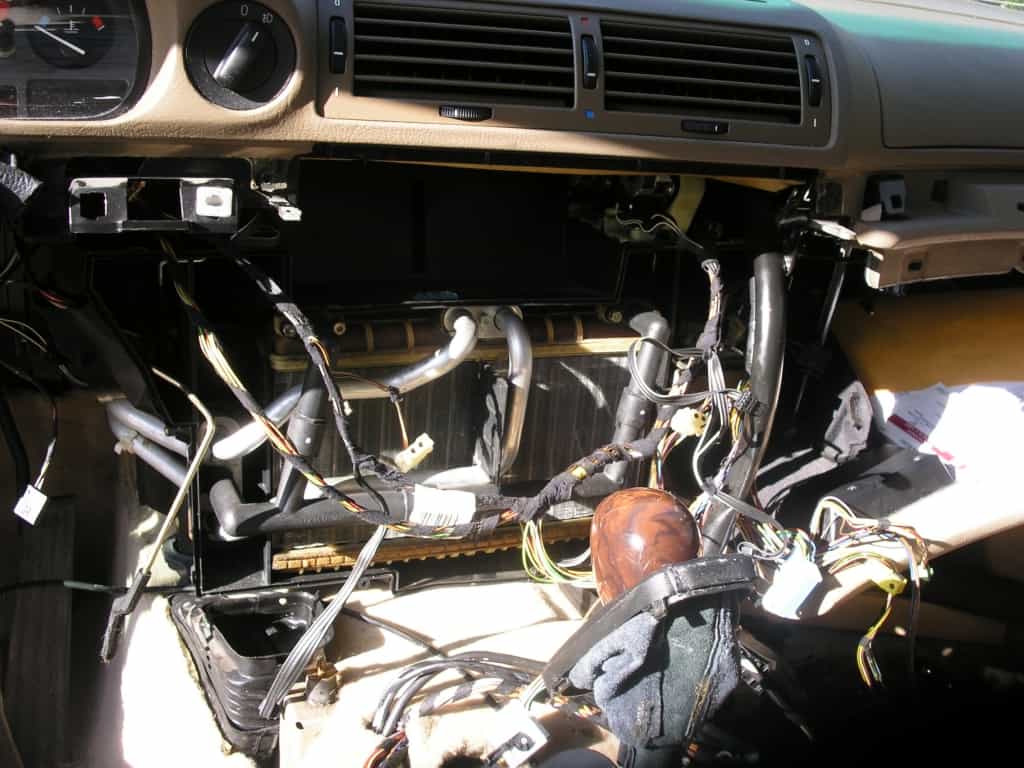 A bad heater core will exhibit symptoms such as a problem with the engine coolant system, a smell in the car, fluid leaking from behind the dashboard and a car heating system that doesn’t work.

The heater core is responsible for heating up the inside of your car when it’s cold outside. It does this by taking heat from the engine coolant system.

If the heater core isn’t working properly, then you’ll notice that the air coming from the vents in the car won’t be as hot as it should.

In this article, I’ll explain how a heater core works, the symptoms when it’s not working and how to fix it.

5 Symptoms of a Bad Heater Core

Usually the first sign of a problem with the heating system in your car is when it doesn’t get as hot as it should. Window’s will start to fog up and it will take longer to get warm on cold mornings.

The heating system in your car has lots of parts, so you’ll need to narrow down the cause of the problem. Luckily, a bad heater core has some fairly distinctive symptoms.

1. Coolant Fluid Leaking From Behind The Dashboard

Fluid dripping from behind the dashboard is a worst case scenario. This will happen if the heater core has failed completely due to a leak. It’s not the most common symptom.

Because the heater core is usually buried behind the dashboard, the fluid won’t always be able to get out easily, unless there’s lots of it.

If you do have wet carpets, there will be a bad engine smell if it’s coolant that is leaking. If not, it could be rain water getting in to the car, and that’s a whole other problem!

2. Car Heating System that is not working properly

If the heater core is not performing as well as it should, then it won’t be able to transfer heat from the engine efficiently.

This means that your car won’t get as warm as it should when you turn on the heating on colder days.

An easy way to diagnose a fault with the heating system is to turn up the heat after driving for 15-20 minutes. At this stage, the engine should have heated up and when you turn on the heat, the inside of the car should start to heat up instantly. If it doesn’t, then there’s a problem.

If the heater core is leaking, or is partially blocked then this will affect the engine coolant system.

Coolant leaking from the heater core will mean there is less coolant to transfer heat away from the engine. If you suspect coolant is leaking from the system, keep an eye on the top up bottle, as low coolant can be dangerous for your engine.

If the coolant level is continuously dropping and there is no sign of leaking coolant in the engine bay (or from the rubber hoses on the engine), then it may be leaking from the heater core or one of the pipes feeding it.

4. Fogged up Windows and Condensation in the car

If the heater core is not getting hot, then the blower fan will only blow cold air into the car. A classic symptom of a faulty heater core matrix is a foggy, damp car on cold days.

Windows won’t clear as quickly and you may notice more condensation than usual. If the heater core isn’t getting as hot as it should, then the air that is blown onto the windows will be colder than normal.

Excess condensation on windows can also be a sign that you have damp carpets. This can be caused by a leaking heater core, or rain water getting into the car.

5. Your engine gets too hot or overheats

A problem with the engine coolant system can often be traced to a failing heater core.Sometimes an engine can overheat because of a blockage somewhere in the system. This blockage can often occur in the heater core, or one of its feeder pipes.

If the coolant in the system is not changed regularly, the anti-corrosion additives in the coolant will tend to lose their effectiveness. When this happens, small metallic parts on the inside of the core can break away over time. This will eventually lead to blockages or leaks.

If the coolant is restricted by the heater core in any way, it can lead to the engine overheating as there will not be enough fluid circulating in the system to keep everything cool.

How does the heater core operate?

The heater core is part of the engine coolant system, and basically works like a small radiator behind the dashboard.

The system works by pumping coolant (a mixture of water and antifreeze) around a sealed system. As the coolant is pumped around this system, it helps to control the engine temperature by absorbing heat. As it passes through the radiator at the front of the engine, it is cooled by air coming in from outside as you drive. During warm weather, or when the car is not moving, the radiator fan will turn on to help circulate cold air around the radiator.

The coolant can also flow through the heater core, which is usually located behind the dashboard.

The heater core resembles a small radiator. As the hot coolant passes through the core, the heat is transferred to the surrounding air, and is circulated into the cabin with the aid of the heater fan.

The components of an engine cooling system

On most modern cars, the coolant will only flow through the heater core when the heating is switched on, or when the engine has reached operating temperature.

In the latter case, the flow of coolant is controlled by a thermostat. If the engine temperature is below a certain level (usually around 80-90C) then the thermostat will remain closed, effectively blocking the heater core.

What Causes a Heater Core To Fail?

One of the main causes of heater core failure is a build up of dirt in the coolant system caused by not changing the engine coolant at regular intervals.

When the antifreeze degrades, dirt and metal particles can start to build up in the coolant as it is pumped around the engine. If left unchanged, this will cause premature failure of parts like the water pump, the radiator and the heat core.

Another reason a heater core can fail is due to lack of use. In most cars, coolant will only flow through the heat core when the heating is switched on. If you live in a warmer climate, or just don’t use the heating that much in your car, then the heat core is less likely to be used and could have coolant sitting in it for long periods of time. This can cause gunge and dirt to build up in it and its pipes, causing them to rust and leak over time.

How To Prevent Heater Core Failure

Here are 5 easy ways you can help to extend the life of the heater core:

How To diagnose a broken heater core

Usually the first sign of a broken heater core is a heater that doesn’t work or windows that keep fogging up.

It’s difficult to examine the heater core without pulling out lots of parts. However, there are a few things you can do first to help confirm your suspicions.

1. Check the floor under the dashboard for leaks

A wet spot or stain on the carpet near the dashboard can be from coolant leaking from the heater core.

If there isn’t enough coolant in the engine then this will affect how hot the heater core can get.

3. See if there are any blown fuses

Sometimes a blown fuse can be the cause of a heating system that isn’t working properly. The blower fan is needed to blow hot air through the air vents and can stop working because of a blown fuse.

4. Ensure the engine is heating up properly

It’s not always easy to check the exact engine temperature on some modern cars. Many cars don’t have a temperature dial on the dashboard any longer. You may need to hook up a diagnostic reader to the engine that can track the temperature in realtime.

5. Check the air vents for blockages

Blocked air vents can prevent hot air from circulating from behind the dashboard. This can cause windows to fog up and for it to appear like the heating is not working.

It’s easy to check air vents by opening them one-by-one and shining a torch in. You may find that a few leaves have found their way in to the vents causing an obstruction.

It’s also a good idea to pull out the cabin air (pollen) filter too. This filter can become very dirty and can severely affect the air getting into the cabin if it’s not changed regularly.