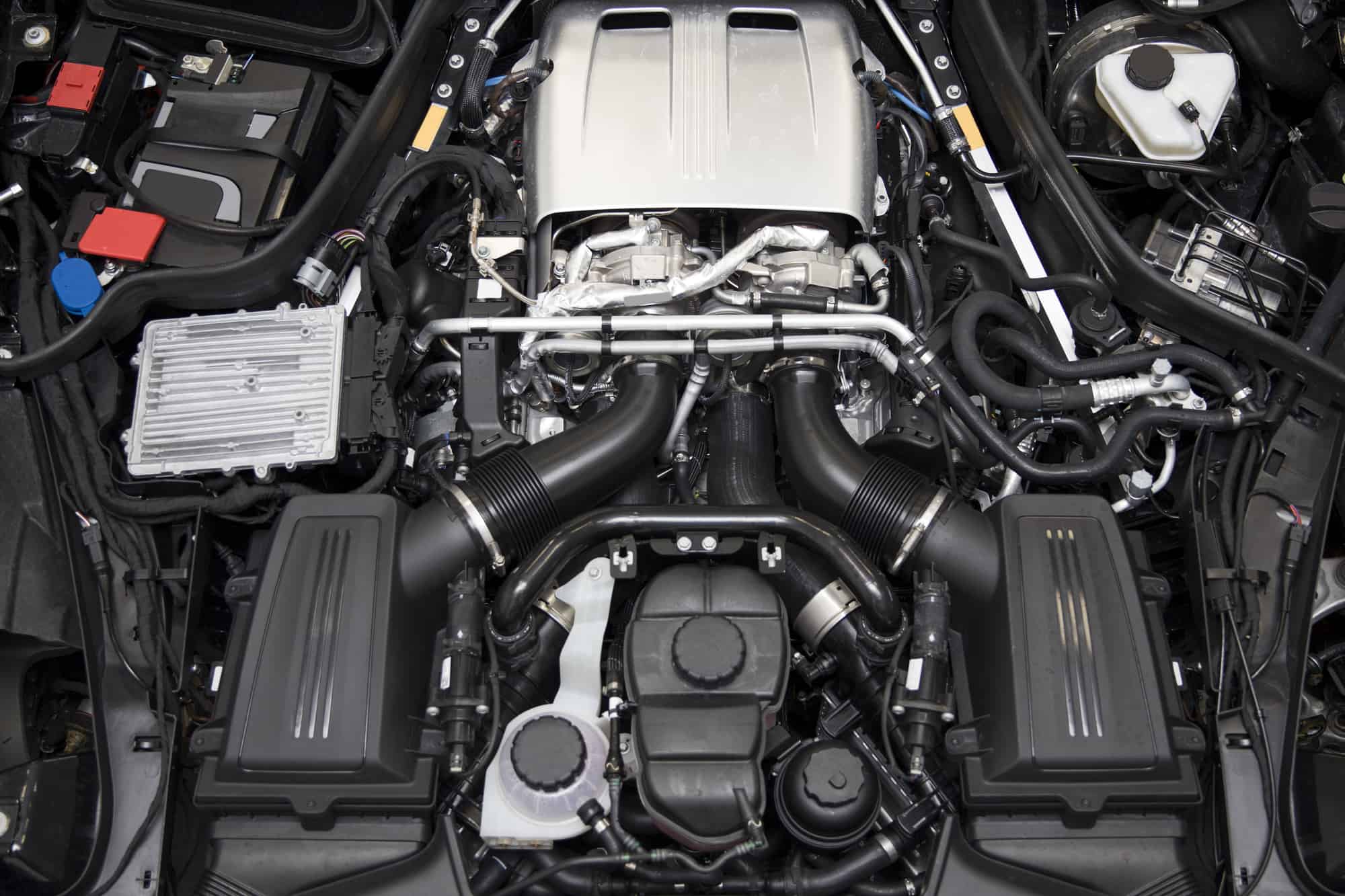 If there is something up with the engine in your car, then the most common symptom is not being able to accelerate quickly or at all.

The common causes of a car that won’t accelerate are a blocked fuel filter, blocked air filter, a faulty throttle position sensor, a faulty MAF or MAP sensor, a vacuum leak or problems with the engine timing.

There are a multitude of reasons why a car won’t accelerate. Sometimes it’s caused by the ECU attempting to protect the engine. It will put the engine into ‘limp home mode’, you’ll get a check engine light on the dashboard and your speed will be restricted.

In this post, I’ll explain the most common reasons why a car won’t accelerate, and how you can diagnose and fix each one.

10 Causes Of A car that won’t accelerate

If you car is not accelerating normally, then there is obviously something up with the engine. The question is, what exactly is wrong with the engine, and which engine part is causing the problem.

Unfortunately as an engine gets older and the mileage increases, then it’s almost inevitable that acceleration problems are going to crop up.

Here are the top reasons why your car won’t accelerate:

Often overlooked during routine servicing, the fuel filter is a common cause of engine acceleration problems. If the fuel filter becomes blocked, even partially, then it’s going to cause problems.

Other symptoms of a  blocked fuel filter include lack of engine power, engine misfires, an engine that cuts out when accelerating and sometimes an engine that won’t start.

Most car manufacturers recommend that you change the fuel filter about every 30,000 miles. If the fuel filter is neglected, then eventually the permeable material inside the filter will start to get clogged up with dirt. This can affect the fuel pressure if not enough fuel is getting through, especially when accelerating.

Not all cars have a serviceable fuel filter. Diesel engines usually have an easy to replace fuel filter, as these are more likely to get clogged up. Petrol engines, however, are often fitted with a fuel filter near or in the fuel tank that manufacturers claim never need to be changed. In reality, this type of fuel filter can still clog up with dirt over time. It is usually more of an issue with older vehicles with higher mileage. If your car is experiencing problems with fuel pressure then you may need to remove the fuel tank to see if the fuel filter needs changing.

The mass air flow sensor (MAF) is an important engine sensor when it comes to acceleration. The MAF keeps track of the amount of air that is entering the engine via the air filter. It passes this information to the ECU so that the necessary amount of fuel can be calculated for a clean combustion cycle of the engine.

A classic sign of a faulty MAF sensor is lack of engine power, especially when accelerating. This is because the information that is being relayed by the MAF to the ECU is not within the expected range. To compensate for the broken MAF, and to protect the engine from damage, the ECU will use a default, ‘safe’ value that is programmed into memory.

A quick way to test for a faulty MAF sensor is to plug out its electrical connector. This should force the ECU to use the default settings for air flow and you should see an improvement in how the engine performs.

It may be possible to fix a MAF sensor by cleaning it with a special MAF sensor cleaner (or electrical contact cleaner). Care should be taken not to handle the internal components of the sensor. If cleaning the MAF does not fix it, then you’ll need to replace it.

A dirty air filter can severely dampen the acceleration of any car. When you press down on the accelerator pedal, a huge increase in the amount of air is needed to feed the combustion process and to increase the power output of the engine.

If the air filter is old or dirty, then the amount of air getting into the engine will be greatly reduced. If a car is not accelerating as it should, I always start by checking the condition of the air filter. Depending on where you live, and the type of driving you do (city vs. rural), you should be changing the air filter at least once a year or every 15-20,000 miles.

The fuel pump is responsible for getting the fuel from the fuel tank to the fuel injectors, by creating a pressurized fuel system. If there is a problem with the fuel pump, then this will cause problems with the performance of the engine, especially when accelerating.

A fuel pump doesn’t need to fail completely to cause problems. Some fuel pump issues can be intermittent, and only come to light when the engine is under strain. Common symptoms of a bad fuel pump are a difficult to start engine, loss of power when accelerating, loud whirring noises from the fuel pump, engine misfires and surges and an engine that cuts out intermittently.

A engine vacuum leak can affect acceleration and the overall smooth running on an engine. This is because extra air, that has not passed through the air filter and MAF sensor is entering the engine and disrupting the air to fuel ratio that is carefully monitored by the ECU.

A vacuum leak can occur at a few places in the engine. A leaking intake manifold is a common vacuum leak source. It can be caused by a faulty gasket or a crack in the intake manifold. Another common cause is a faulty or loose vacuum hose.  These hoses are made from rubber and they can crack or split, causing air to be sucked in from the engine bay. The throttle body gasket can also cause a vacuum leak.

A visual inspection of the engine can often reveal the cause of a vacuum leak. If you run an engine diagnostic common error codes associated with vacuum leaks include P0171, P0174 and P0300.

The easiest way to find the source of the vacuum leak is to use a smoke machine. If you hook the machine up to the intake manifold you can easily see if the smoke is leaking from any of the gaskets or hoses.

A turbocharger can stop working for many reasons. Sometimes the oil feed pipes can become clogged, starving the turbo of fresh engine oil. The seal between the turbo and the engine can fail, making it impossible for the turbo to build up air pressure, causing a lack of engine power. Sometimes the turbine blades can get damaged from dust and dirt entering the turbo  via the compressor inlet or the turbine inlet.

Common turbocharger error codes include P0235 and P0299. Engine performance symptoms will include a lack of engine power, a bluish smoke from the exhaust and a loud whine from the turbo itself.

If the turbo has failed you will need to replace it or have it refurbished. Don’t forget to also replace all of the gaskets and oil feed pipes too, as these are common causes of turbocharger failure.

The timing belt (or timing chain) is responsible for keeping the crankshaft, pistons and valves turning in time with one another. If the engine timing is off, even by a small amount, then this can severely affect cylinder compression and engine performance.

Other symptoms of a slipped timing belt include engine misfires, an engine that is rough when idling and a loud ticking or tapping noise from the top of the engine.

If you suspect that the timing belt is causing the acceleration problems then you will need to inspect it and possibly replace it. This involves inspecting the belt by removing the plastic covers that protect the belt. If the timing belt has not been changed (every 60-80,000 miles) then it is advisable to change it, even if it does not look visibly worn.

The throttle position sensor is responsible for letting the engine ECU know how hard you are pressing the accelerator, and the associated position of the throttle body plate or butterfly valve.

If the sensor is faulty then the ECU will not accurately know how much air is passing through the throttle body. This will affect the air to fuel ratio of the engine, causing engine performance issues.

Common symptoms of a bad throttle position sensor include poor fuel economy, lack of power and acceleration, engine misfires, surges and hesitation in engine power and a check engine light illuminated on the dashboard.

A bad throttle position sensor will usually trigger the error codes P0121 and P0122. A bad sensor will need to be replaced and this may involve removing the throttle body.

If your transmission is stuck in too high, or too a low a gear, then this will affect engine power and acceleration. The best way to start diagnosis is to check for error codes. A faulty transmission control module will usually trigger the error code P0700.

The easiest way to resolve this fault is to replace the module with a new or refurbished unit. You can expect to pay $250 to $500 for a replacement and this can rise to $1000 if you get a mechanic to do the labor for you.

If the crankshaft or camshaft position sensors are faulty then this will affect engine performance and may leave you with an engine that won’t start. These two sensors are responsible for monitoring the speed and position of the crankshaft and camshaft. This information is vital for keeping the engine timing in check and for the engine to run smoothly.

This type of problem is diagnosed easily using a diagnostic reader. Common error codes for faults with these sensors include P0335, P0339 for the crankshaft sensor and P0340 for the camshaft sensor.

It is fairly easy to replace a crankshaft or camshaft position sensor. They can be located in different positions on different engines, so it’s best to check a vehicle repair manual before you start. Once located, it’s as simple as unplugging the electrical connector from the sensor and unscrewing the retaining nut to remove the sensor. After fitting the new sensor don’t forget to clear the ECU of error codes.

You can expect to pay $50 to $80 dollars for a good quality replacement sensor. If you want a mechanic to perform the labor, then expect to pay an extra $80 to $100.