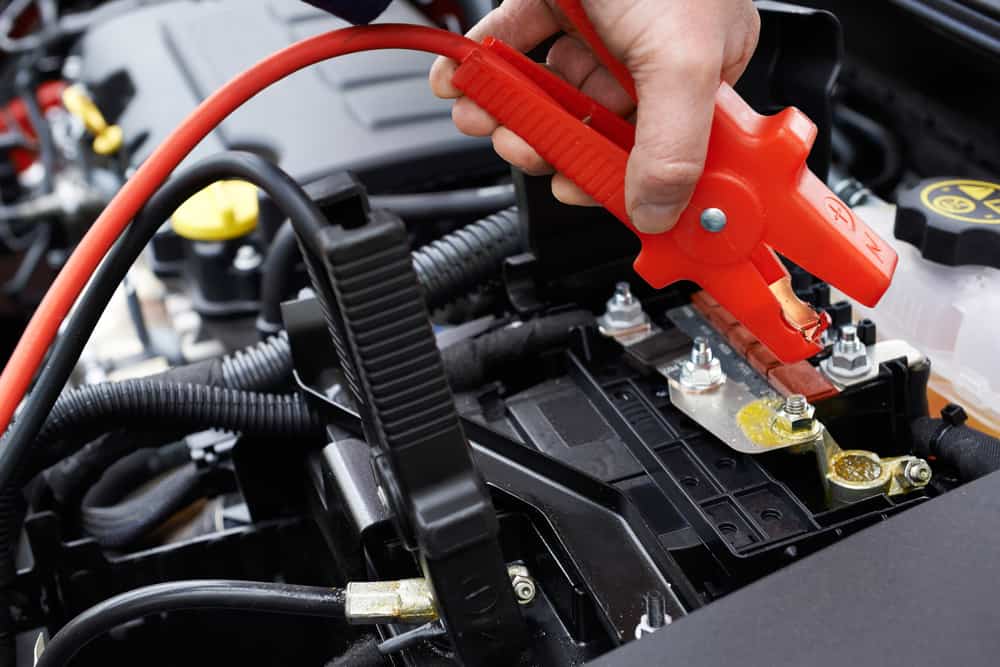 A flat car battery has to be one of the most common car related problems there is. There are a number of reasons why a battery goes flat and there are a few novel ways to recharge it. So how do you charge a car battery if you don’t have a battery charger?

A car battery can be charged in a number of ways without a charger. These include using jump leads connected to a donor battery, using a solar panel, using a power inverter connected to the mains, using another vehicle or by using a portable jump starter.

If possible a proper battery charger should be your first choice as they offer the safest and most effective solution for reviving your car battery.

However, if you don’t have access to a charger, then check out these other methods of charging a car battery.

Method 1: Charge by using jump leads and a donor vehicle

The most common way to charge a dead car battery is by using jump leads and a donor vehicle.

If you don’t have access to a car charger, then using jump leads is the easiest and safest way to start a car that has a dead battery.

It’s important to note that jump leads will only charge the battery enough to start the car, then the alternator takes over the job of charging the battery. If there is a problem with the battery charging system in your car and the battery won’t charge, then using jump leads is not going to help you much.

When using jump leads it’s important that you read the owners manual for both vehicles before hooking up the leads. Modern vehicles have complicated electrical systems meaning jump leads need to be connected in a certain order to avoid causing damage.

Here are a few tips for successfully jump starting a car.

Tip 1: Before you connect up the jump leads, check that the battery terminals on the dead battery are clean and free from dirt and corrosion. Clean them with a wire brush, or if they are really bad you can also using a baking soda solution.

Tip 2: Make sure the jump leads are heavy enough to provide enough current to start the dead battery. They should be no more than 6 gauge (preferably 4 gauge) to ensure they can carry the current safely and don’t melt.

Method 2: Use a solar panel

Another common method of charging a car battery is by using a solar panel or solar battery charger.

This type of charger is actually fairly easy to make, and is safe to use if you know a bit about things like voltage and amps. It’s not the best way to charge a car battery, especially if the battery is totally dead.

Charging a battery that is totally dead can take around 8 hours, depending on the size of the battery and the amount of current that the solar panel can produce.

If you decide to use a solar panel to charge your car battery, then it’s very important that you know what you are doing. You can’t just connect up the solar panel cables to the battery and walk away.

The are a few different ways of hooking up a standalone solar panel to your car battery, but at the very least I recommend using a solar charge controller (link to Amazon.com).

A good quality solar charge controller will prevent over charging of the battery and will also block reverse current.

For example, a 100W solar panel charger will generate around 6 Amps. This would be sufficient to charge a car battery from flat in around 8 to 10 hours.

Method 3 : Use A Home UPS Inverter

A UPS inverter can be used to convert DC battery power to AC power. They generally are installed so that a 12V battery source, such as an inverter battery can be used as a backup power source in a home or business.

A home inverter battery is a battery that you can use to power things around your home for a short period of time, like during a power cut.

Most inverters will have safety features built in to monitor the voltage of the battery and prevent over charging and over heating, but you should always be sure before you start charging.

Method 4: Put The Battery Into Another Vehicle To Charge

If you have access to another vehicle that uses a similar battery to the one that you are trying to charge, then you may be able to charge your dead battery using this vehicle.

This isn’t the best way to charge a battery, but it can work sometimes, especially on older vehicles that have less complicated electronics. It’s also a good way of charging a car battery that you may use for camping or in an RV.

Before you swap over the batteries there are a few things that you need to check first.

If all of the above conditions check out, then you can go ahead and put the dead battery in the donor car. Make sure that the engine is switched off on the car and any auxiliary electrics are switched off.

If the battery it is totally dead, then you will need to jump start the vehicle so that it will start to charge the dead battery using the alternator.

Once the battery is in and the engine is running the best way to charge the dead battery is to take the vehicle for a good long drive. This will ensure that the battery gets charged slowly and fully.

Method 5: Use A Portable Car Jump Starter To Charge The Battery

Ok, so the heading may be a bit misleading. Technically you’re not using the jump starter to charge the battery, but it is used to start the process. Once the engine is started, then the alternator will take over the process of charging the battery.

Here are a few tips when using a jump starter.

Method 6: Use A Battery Isolator To Charge The Battery

Battery isolators are a popular choice among RV drivers and regular campers. When installed, a battery isolator allows you to charge a secondary battery using the electrical power from a vehicles alternator.

A battery isolator works by sending some of the electricity generated by the alternator to a second battery. It’s not the best way of charging a completely flat battery as it doesn’t provide as much current as a dedicated charger would. This is because when the vehicle is running, the alternator also has to charge the primary car battery and supply power to the various auxiliary systems installed in the vehicle.

However, it is a good way of topping up a 12V car battery that you may be using as a power source in an RV or on a campsite. They can also be used along with solar panels as an alternative way to charge a secondary battery.

Here is an excellent video that explains battery isolators and how you can use them to power a second battery in a camper van.