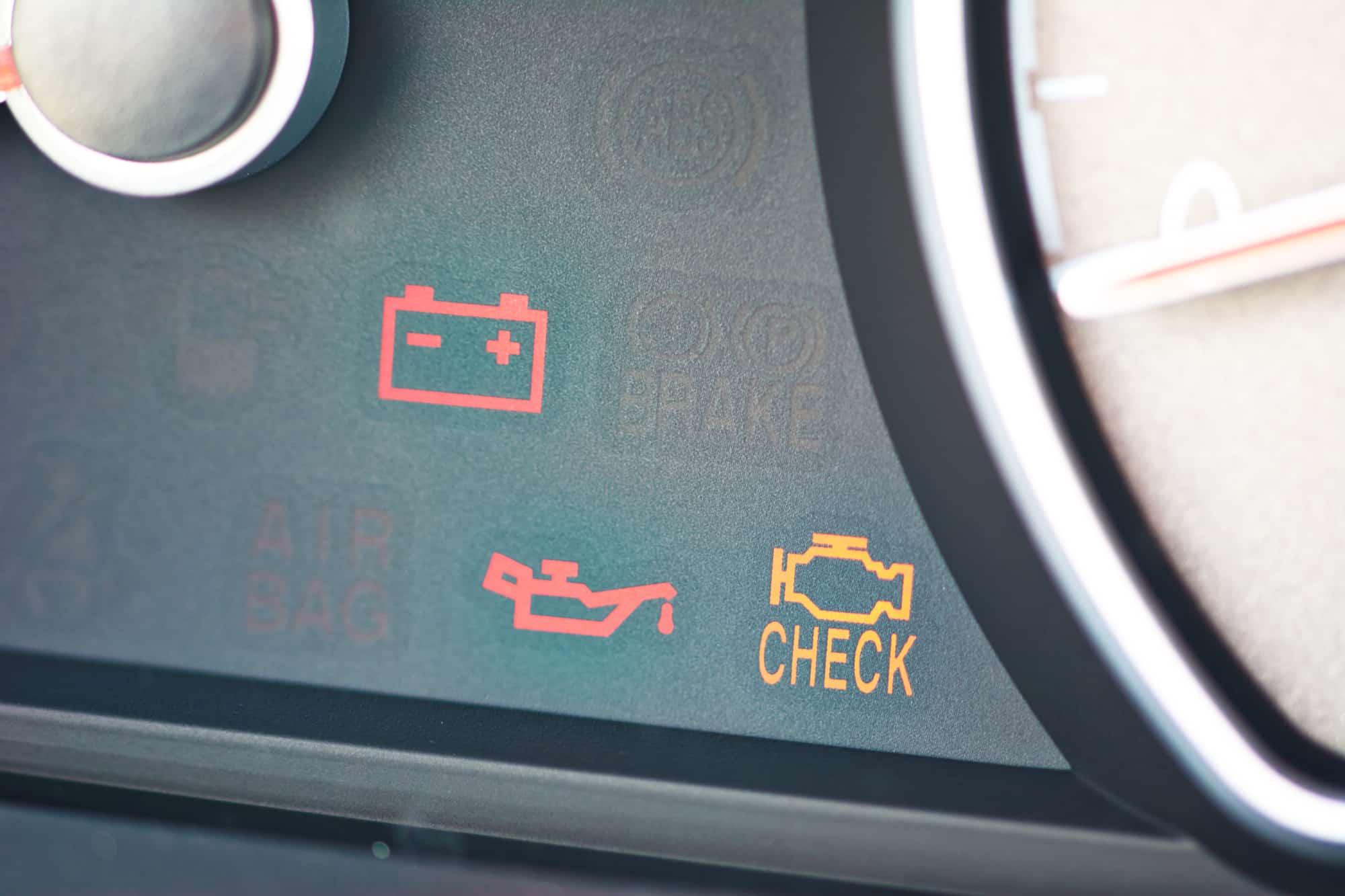 In general, if there is a check engine light and the car is not accelerating, then there is a problem with one or more engine components. The problem can be caused by a lack of fuel, a faulty ignition coil, bad spark plugs, or a broken engine sensor. It can also be caused by a vacuum leak or a failed gasket such as the head gasket.

What Causes The Check Engine Light And Car Not Accelerating? (6 Common Causes)

In general, if the check engine light comes on, there is a problem with the engine and this is usually caused by a lack of one or more of the following: fuel, air, fuel ignition, or compression. In this case, the engine will restrict the power output of the engine in an effort to protect the engine from damage.

There are many reasons why the check engine light can come on. It generally means that there is a problem with the engine and this is affecting how well it operates and needs attention soon.

Cause 1. Lack of Fuel In The Engine

Lack of fuel or adequate fuel pressure is one of the most popular reasons why the check engine comes on accompanied by a lack of acceleration. The problem can be caused by a problem with the fuel delivery system such as a blocked fuel filter, a leak in the fuel system, a faulty fuel pump, or a bad fuel injector.

The fuel system is sealed and operates under high pressure so as to ensure an immediate supply of fuel to the cylinders on demand. One of the most common reasons for a blockage in the fuel system is a blocked fuel filter. Filters can sometimes become blocked if they are not changed on schedule or if dirt gets into the fuel tank. You may only notice that the fuel filter is restricting fuel supply when you accelerate hard and a sudden increase in fuel is needed.

Usually, the ECU will trigger the check engine light if there is a drop in fuel pressure at the fuel rail as detected by the fuel rail pressure sensor. This will also store a code P0087- Fuel Rail System Pressure in the ECU.

If the mass air flow sensor is not measuring the airflow rate correctly, then this will affect the fuel to air ratio in the cylinder and will usually result in a lack of power and an engine that runs too rich or too lean. The MAP sensor works with the MAF sensor to calculate the air density and rate of airflow into the engine. A faulty MAP sensor will also affect performance and can

A bad ignition coil is a very common reason for the check engine light to come on, and a real lack in acceleration power. The ignition coil is responsible for powering the spark plug that kick starts the combustion in the connected engine cylinder. If the ignition coil has completely died, then the affected cylinder will not be burning fuel and this will trigger the check engine light. The engine will also be ‘down one cylinder’ and this will negatively affect the acceleration power of the engine.

Other common symptoms of a bad ignition coil that may trigger the check engine light include rough engine idling, engine misfire, difficulty starting the engine, and a smell of gas from the tailpipe.

A bad ignition coil, if left unrepaired can damage an engine and unburnt fuel can damage the catalytic converter and oxygen sensors if it makes its way to the tailpipe.

It’s usually fairly easy to find out which ignition coil is at fault by running a diagnostic with an OBD-II reader. Common error codes for bad ignition coils or bad coil packs include P0350 to P0356.

Another very common reason for lack of acceleration power and a check engine light is one or more bad fuel injectors.

A bad fuel injector is usually either leaking or is blocked. It’s more common for fuel injectors to become blocked over time. This can be caused by the buildup of partially burnt fuel around the tip of the injector if the engine is not performing properly. Injectors can also become blocked if there are contaminants in the fuel or if there is water vapor in the fuel lines that leads to rust and debris forming in the fuel system.

Other symptoms of a bad fuel injector include a rough running engine accompanied by a strong smell of fuel from the exhaust and an engine that is difficult to start or dies soon after starting.

A bad fuel injector can be diagnosed by using an OBD-II scanner and then confirmed by removing and inspecting the injector. Common fuel injector-related error codes include P0201 – P0205 and other generic misfire and lack of power codes such as P0300 and P0299.

Cause 5. A Leaking head gasket

If the head gasket starts leaking this can cause many engine problems that will trigger the check engine light and will lead to a loss of acceleration power.

A leaking head gasket will usually cause a loss of compression in one or more engine cylinders. The head gasket is there to form a seal between the cylinder head and the engine block. If it starts to leak it can allow coolant into the cylinders and engine oil. This leak won’t trigger the check engine light itself but will cause misfires and loss of oil and combustion pressure that will result in the check engine light coming on.

Some of the most common symptoms of a leaking head gasket are loss of coolant, engine overheating, loss of engine power, and low oil pressure. These symptoms can cause a lot of different error codes such as P0171 (fuel mix lean), P0522 (oil pressure problems), P030x (engine misfires) among others.

Cause 6. A vacuum leak

Another common reason why your car is not accelerating with a check engine light is because of an engine vacuum leak. A vacuum leak will lead to a loss of combustion pressure and that will reduce the amount of power that the engine generates.

A vacuum leak can also allow unmetered air to enter the manifold. Unmetered air is air that has not entered the engine via the air filter and mass airflow sensor. This excess air will affect the fuel to air ratio needed for combustion to occur, causing the engine to run lean, resulting in less power and possible engine misfires.

Vacuum leaks can occur in many places around the engine, and usually from a leaking gasket or rubber hose. If the leak results in a problem like a cylinder misfire, spark plug damage, or unburnt fuel making its way to one of the oxygen sensors then this will trigger the check engine light.

What Next: How To Fix A Check Engine Light And Car Not Accelerating?

If the check engine light is on and your car is not accelerating, there are a few simple checks that you can carry out to help narrow down the cause of the problem.

As the check engine light is on, there will usually be an engine trouble code stored in the ECU. This is caused by an engine sensor reporting an out-of-range value.

The first thing to do is to run a diagnostic that will read any error codes stored in the ECU memory. This can be done using an OBD-II error code reader. If this reveals some codes, then this will help to point you in the direction of the problem.

Here are a few common things to check.

Usually, the fuel filter will need to be nearly completely blocked for it to affect acceleration and you may only notice the effect when accelerating quickly. If there is a serious lack of fuel getting to the fuel rail, this will trigger an engine trouble code (P0193 – Fuel Rail Pressure Sensor Circuit High Input) and the ECU may respond by restricting the power output of the engine so as to prevent serious misfires. You will also see a check engine light on the dashboard to indicate the problem.

2. Can bad spark plugs cause your car not to accelerate?

Yes, bad spark plugs will affect the acceleration and general power output of your car. This can be due to a lack of fuel ignition because of a bad spark and this results in incomplete fuel combustion.

If you’ve got one or more bad spark plugs, you may also notice that the engine is difficult to start, there may be frequent misfires or hesitation and you may also be using more fuel than normal.

3. When I step on the gas my car hesitates?

If your car hesitates when you step on the gas this can mean that there is a problem with the fuel system, the air intake, or the fuel ignition system. There can be many causes of a lack of acceleration. The most common include faulty or blocked fuel injectors, a blocked air filter, a blocked fuel filter, a faulty MAF sensor, faulty ignition coils, bad spark plugs, and even a clogged catalytic converter.

The best way to diagnose why your car is hesitating is by hooking up an OBD-II diagnostic reader to check for engine error codes. This will tell you if there is a faulty engine sensor or if the engine is misfiring because of a faulty injector or ignition coil.