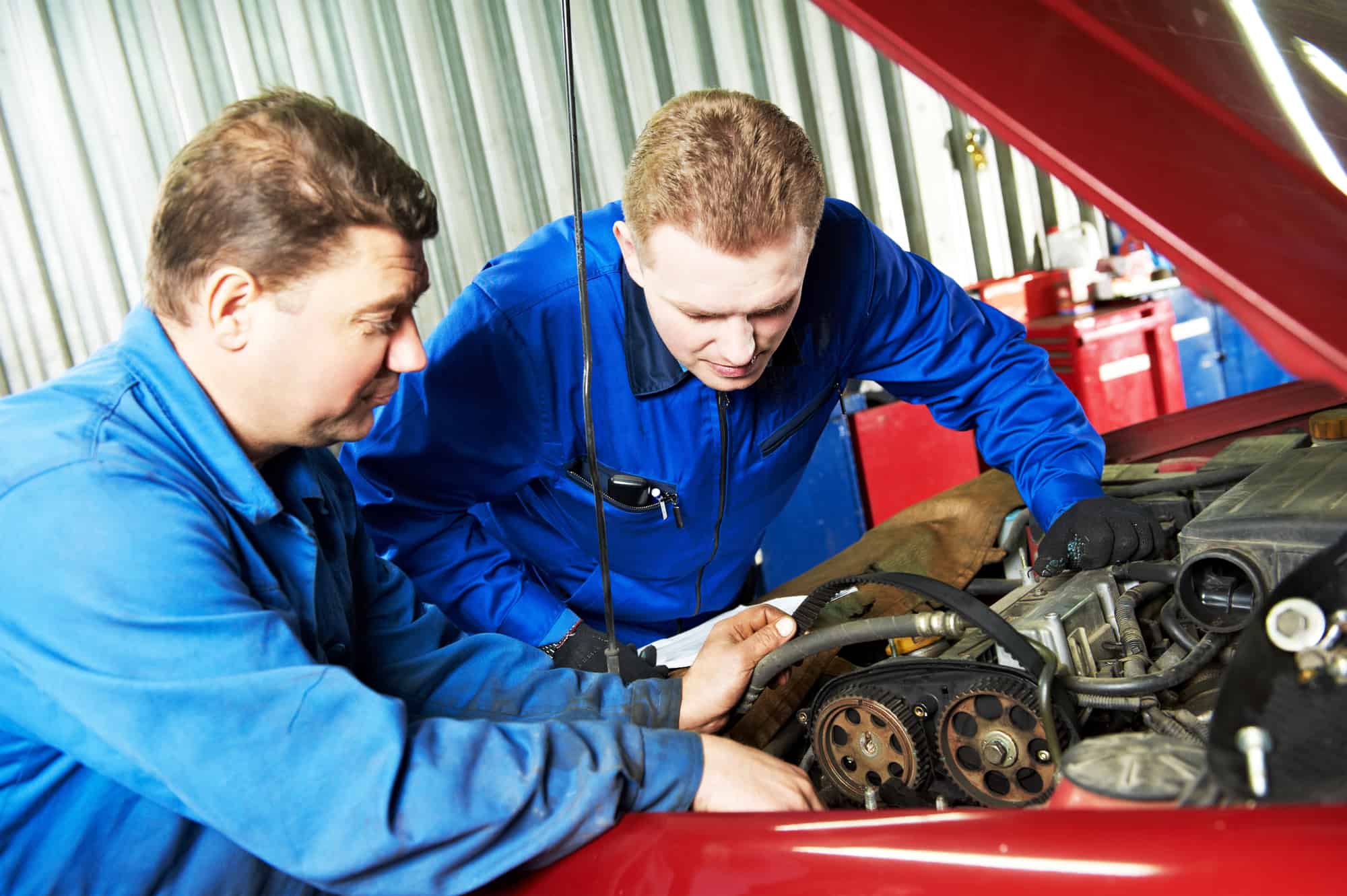 Changing the timing belt can be a complicated process on some engines. It can often involve removing lots of plastic covers and some engine components to get to the timing belt. Sometimes when everything is put back together the car won’t start.

As a general rule, if your car won’t start after a timing belt change this is usually because the engine timing has not been set properly. It can also be caused by a lack of fuel pressure, a problem with the spark plugs or a problem with the starter motor.

It can be difficult to pinpoint the reason why a car wont start with a new timing belt fitted. The very first thing you should always double-check is that the engine timing is set exactly right. Make sure when fitting a new timing belt that the engine is set to top dead center (TDC) so that the piston in the first engine cylinder is at its highest point in the compression cycle. This is usually done by aligning the crankshaft and camshaft with their respective marks on the engine block.

Changing the timing belt is one of those jobs that can differ a lot from vehicle to vehicle. It usually involves removing a lot of plastic covers and ancillary parts just to access the timing belt. There is also the job of locking the camshaft to ensure that the timing remains set in place when the belt is removed. This can differ from vehicle to vehicle and can often require a special tool that is designed to work with a specific engine block.

Probably the most common reason the engine won’t turn over is that the timing belt has been fitted incorrectly. This means that the belt is too loose, too tight, or is not positioned correctly on the teeth of the camshaft/crankshaft.

When it comes to fitting a new timing belt it’s important to first check that the replacement belt is an exact match of the old belt. It must be the same exact thickness, width, and length with the same number of grooves. Assuming the belt is correct, you then need to ensure that the belt is tensioned properly and that the grooves on the belt are fitted correctly on the teeth of the camshaft and crankshaft.

Most modern vehicles have an automatic timing belt tensioner. This means that you don’t need to worry about making sure the belt is tight enough when in position. It is however important to ensure that the tensioner is also replaced when the timing belt has been replaced. Tensioners can lose their ability to hold the belt in place and this can lead to the belt jumping a tooth or coming off completely. If it’s an older vehicle then you may need to tension the timing belt manually before starting the engine.

It’s also important that the timing marks on the belt are lined up with the marks on the crankshaft and camshaft. If the engine has a double overhead camshaft then the belt must be fitted so that it is not too tight or too loose across the top of the camshafts. This can usually be set by counting the number of grooves on the belt between the top teeth on each camshaft sprocket.

Sometimes you may need to remove the starter motor to change the timing belt. If it is not refitted properly then this can prevent the car from starting.

Reinstalling the starter motor can be tricky and it’s important that the starter bendix lines up with the ring gear on the flywheel so that it can engage properly when the starter is fired. It’s also important to double check that that positive and negative leads are fitted correctly and all connections are tight.

The order of the wiring however is very important. When it comes to coil packs, the wiring for each ignition coil is usually only long enough to go to the correct coil, so it’s difficult to get it wrong. If your vehicle has a distributor pack and spark plug leads then it is possible to mess it up. Make sure to mark each lead before removal so that you put it back onto the right spark plug when reinstalling.

Reason 4. Lack of fuel at the correct time

The timing belt is repsonsible for the timing of the ignition and firing sequence of the spark plugs. If the timing belt has been fitted incorrectly, fuel will not be delivered to the combustion chambers at the right time and this will stop the car from starting.

Sometimes to replace the timing belt you may need to disconnect parts of the fuel delivery system such as the fuel injectors, the fuel filter or even the fuel pump. If these parts are not reinstalled properly then this will lead to problems with the fuel system delivering fuel at the right time and at the right pressure.

Reason 5. Problem with the spark plugs

Another very common reason why a car won’t start after replacing the timing belt is because of a problem with one or more spark plugs. As outlined above, it’s often necessary to remove the ignition coils or to disconnect the spark plug leads in order to access the timing belt. It’s therefore vital that everything is put back together in the right order and securely so that each spark plug can fire properly when necessary.

The spark plug also plays a pivotal role in the ignition sequence of the combustion cycle of the engine. If the timing is not set properly then it’s inevitable that the spark plug will fire at the wrong time, increasing the chances of the engine not starting or running properly.

It’s usually necessary to unplug sensors or wiring as part of the timing belt replacement procedure. As outlined above, the ignition coils usually need to be removed. You may also need to unplug the camshaft and crankshaft sensors or other sensors such as the mass airflow sensor (if you need to remove the air filter box for access).

If the car won’t start when everything has been refitted, it’s a good idea to double-check the sensor connections to make sure that they are tight. If a sensor, such as one of the camshaft sensors is damaged then the ECU will not be able to manage the engine timing and this can prevent a vehicle from starting. If possible, run a diagnostic to see if there are any engine error codes stored in the ECU that may point to a faulty sensor. P0340 is a common camshaft sensor error code, and P0335 can mean that the crankshaft sensor is not working properly.

Car won’t start with new timing belt? What next?

If you’ve fitted the new timing belt, and you’ve refitted any parts or sensors that were removed, but the engine still won’t start, then you’ll need to do a few simple checks to ensure that you haven’t overlooked something. Here are a few things to check to help narrow down the cause of the problem.

5. Check all other hoses. If you’ve removed any other hoses such as turbo or vacuum hoses, check to make sure that they have been reconnected tightly. A significant vacuum leak can prevent the engine from starting or may cause it to cut out soon after it starts. There are usually a few vacuum hoses fitted to engines, and they will vary depending on the model.

1. can you tell if a timing belt has been changed?

No, it is impossible to tell for sure if a timing belt has been changed recently by simply looking at it. Some garages will put a sticker on the timing belt cover with a date and mileage reading when the timing belt is changed, but this is no guarantee that it has in fact been changed. It is possible to check the condition of the timing belt and this may give an indication of how old it is, but timing belts are usually well covered and won’t show visible signs of wear unless they are really old.

It’s very common for timing belts to become stretched as they age, and this can cause them to jump a tooth on the camshaft. It’s not always easy to spot a stretched timing belt, and it may initially only present itself as a badly running engine.

3. can low oil cause timing belt to break?

No, low oil will not directly cause a timing belt to break. However, an indirect seizure of the engine caused by low oil can cause the timing belt to snap.

The timing belt is fitted to the outside of the engine where it has no contact with engine oil, unlike a timing chain that is fitted within the engine and needs engine oil to operate smoothly. The only way that low oil will cause a timing belt to break is if either the camshaft or crankshaft locks up causing the timing belt to stop rotating at one end whilst being pulled at the other end. It’s not likely that this will happen on a modern engine as there are safety mechanisms in place that would stop the engine if the oil pressure gets too low.