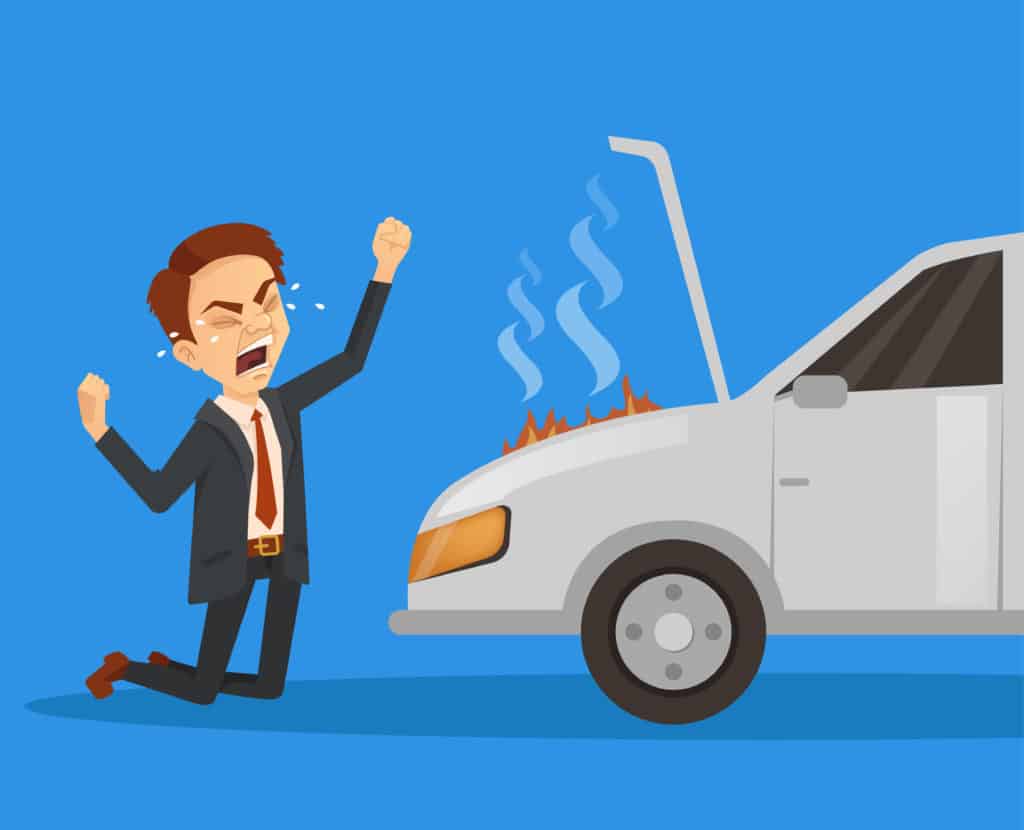 If your car is overheating when you are driving then you could be slowly killing your engine. Overheating is one of the worst things that can happen to your engine. It can cause irreversible damage to the engine, especially if left unfixed for a long period of time

Unfortunately, the first sign that an engine may be overheating is when the engine temperature needle shoots up into the red, or you get an overheating symbol flashing up on the dashboard.

6 causes of an overheating car engine

An engine will usually overheat because of either a lack of good quality coolant, or a problem with how the coolant is pumped around the engine.

These problems will almost always be caused by failure of one or more parts of the coolant system. Here’s a quick a run down of the most common problems and how to fix them.

This might seem like and obvious one, but over time, even without any leaks present, coolant can gradually evaporate from the system. The best time to check the coolant level is when the engine is cold. It should be between the min and max markings on the overflow/top-up bottle. It’s always a good idea to check your vehicles’  handbook, especially if you aren’t sure of what you should be looking at.

If the coolant level is off, then you need to figure out why. Have a look around the engine for signs of a leak, especially under hoses and at the joints where they attach to the radiator and engine. If you see a split hose or leaky joint then you may have found the problem, otherwise top-up the coolant level and check it again in a few days.

If the coolant level has dropped again, but there are still no leaks, then the coolant may be leaking into the engine. This can be difficult to diagnose properly, but some warning signs include – rough engine idle, milky deposit under oil filler cap, higher than normal engine oil level, brown or dirty looking coolant in the coolant bottle.

A broken water pump is often easy to diagnose, even without removing from the car. If the engine is overheating when not moving, there is coolant in the coolant bottle and the radiator fan is coming on when the engine heats up, then checking the water pump is next on your list.

Locate the pump, and check that there are no leaks and that the serpentine belt that runs the pump is not damaged or slipping. If the water pump is damaged, it will make a noise. There could be a broken or damaged impeller and this will make a loud clicking noise in time with the engine. If you suspect that the water pump is damaged, then you will need to remove it to have a closer look.

​If the coolant hasn’t been changed regularly, it can gather dirt and grit that can partially block the rubber hoses, leading to a decrease in coolant flow rate. In older cars especially, the radiator can get gunked up with dirt from the coolant. This decreases it’s efficiency  and sometimes can lead to a total blockage.

To diagnose this, you may need to disconnect a few of the hoses so you can checkout their condition inside. If you find they are blocked or very dirty, then you are almost guaranteed that the radiator is in the same condition too. Sometimes a coolant system in this condition will still work but will be much less efficient, causing it to overheat sometimes.

The thermostat controls the flow of coolant around the engine by monitoring the engine temperature. It does this by opening when the engine gets hot to allow coolant to flow to the radiator to cool and then back to the engine. If you have ruled out any problems with the rest of the system ,then it’s worth taking out the thermostat for a closer look.

The oil in your car’s engine also helps to keep it cool. If you let the oil level go too low, this can also contribute to it overheating. It’s also very important to use the right oil in your car and to change it regularly.

Why Is My Car Overheating But There Are No Leaks?

The main cause of an overheating engine with no leaks is a faulty water pump, a broken thermostat or a blocked radiator.

If your car is overheating but there are no visible coolant leaks, or damaged hoses, then there is a problem with another part of the coolant system that is stopping the coolant from flowing freely around the system

how does an engine cooling system work?

Early cars used a cooling system that consisted of directing cold air around the engine parts as the car moved. The cold air can be naturally flowing or can be directed using a motorized fan and shrouds to increase it’s effectiveness. In most cases, the cylinder head of an air cooled engine will be covered in fins to increase the surface area that can be cooled by the air.

One of the most famous air cooled engines was used in the Volkswagen Beetle. This simple design appeared in the late 1930’s and has lasted up until the present day.

This system works by pumping fluid known as coolant or antifreeze, through hoses and pipes around channels in the engine block. The cool fluid removes the heat from the engine, and then it is passed through a radiator that in turn cools the fluid. When the temperature gets too high there is usually a fan that helps dissipate the heat from the radiator.

Most passenger cars today have similar cooling systems comprised of the same basic parts. Usually when something goes wrong, it’s because of a problem with one of these parts. So here’s a quick overview of these parts and what they do.

1. Coolant/Antifreeze – This is the stuff that makes it all work. For normal climates, it’s a 50:50 mix of distilled water and coolant. The coolant is usually made from methanol or ethylene glycol. It increases the boiling point and lowers the freezing point of the water in the mix, making it a much more effective at dissipating heat.

2. Water pump – This is one of the most important parts of the coolant system. The role of the water pump is to pump the coolant around the engine, and it is driven by a serpentine belt that is run by the turning of the engine crankshaft.

3. Radiator – The radiator is located at the front of the engine where it is exposed to the cool air flow that comes in through the front grille of the car. The radiator helps to cool the coolant as it is pumped through it.

4. Coolant Expansion Bottle – This acts as an overflow and top up point for the coolant. It will have a minimum and maximum marking on it so you can easily tell if the coolant level is correct. A word or warning, don’t ever unscrew the cap from the lid while the engine is hot or you are likely to receive a nasty scald.

5. Coolant Thermostat – The role of the thermostat is to control the flow of the coolant around the engine and the heater core behind the dashboard. The heater core helps to heat the inside of the car when the engine is hot.

6. Rubber Hoses – Most cars use rubber hoses that connect the various parts of the system together, such as the coolant bottle to the engine block and the engine back to the radiator. These hoses tend to go hard over time with exposure to the heat from the engine, causing them to eventually crack and leak. This is one if the most common causes of an engine overheating.

What To Do if Your Car Overheats?

If you see the engine temperature needle in the red, or you get a warning light on the dashboard to warn you that your car’s engine is overheating, you will need to act quickly.

5 Symptoms of an overheating engine

The first thing you need to do is to try and cool the engine as much as possible, to minimize the potential damage. Once you have things under control, you can then start to investigate what’s going on.

what you should DO straight away if Your Car is overheating:

What you should NOT DO when you Car is Overheating:

How To Prevent Your Car From Overheating

The only way you can help to stop your car from overheating is to perform regular maintenance and checks.

1. Flush The Radiator and Cooling System

Coolant generally needs to be changed every 2 years, no matter what mileage you have done. The antifreeze properties of the coolant are gradually lost over time, and it can become gunked up with dirt and grit.

It’s a good idea to flush the system every couple of years to prevent blockages and to renew the coolant.

Engine oil not only lubricates the engine, but it also helps to dissipate heat from the engine block. Dirty, watery oil that has been in the engine for a long time won’t be as efficient at cooling or lubricating. It’s therefore important to stick to service schedules and change the oil at least once a year.

3. Top Up The Coolant Level

The coolant level can drop a small amount over time and it’s important that the level doesn’t drop below the minimum in the expansion bottle. You can buy small bottles of coolant that can be used for occasional top up. Don’t be tempted to add tap water to the expansion bottle, this will only dilute the coolant mix in the system.

This is an easy way to identify leaks before they get too bad. When the engine is cold, using a torch, go along each of the coolant hoses, squeezing them gently to see if there are any hairline cracks or drops of coolant. Sometimes cracks in hoses can start off small, before suddenly failing when you are speeding down the highway!

If you really want to see how your engine is performing, then hook up an OBD2 reader and check for engine errors. Some readers will just list error codes, but more advanced models will allow you to check parameters such as engine temperature, oil pressure etc when the engine is running. If the engine isn’t running at the right temperature this may point to a problem with a coolant thermostat or some other coolant system component.